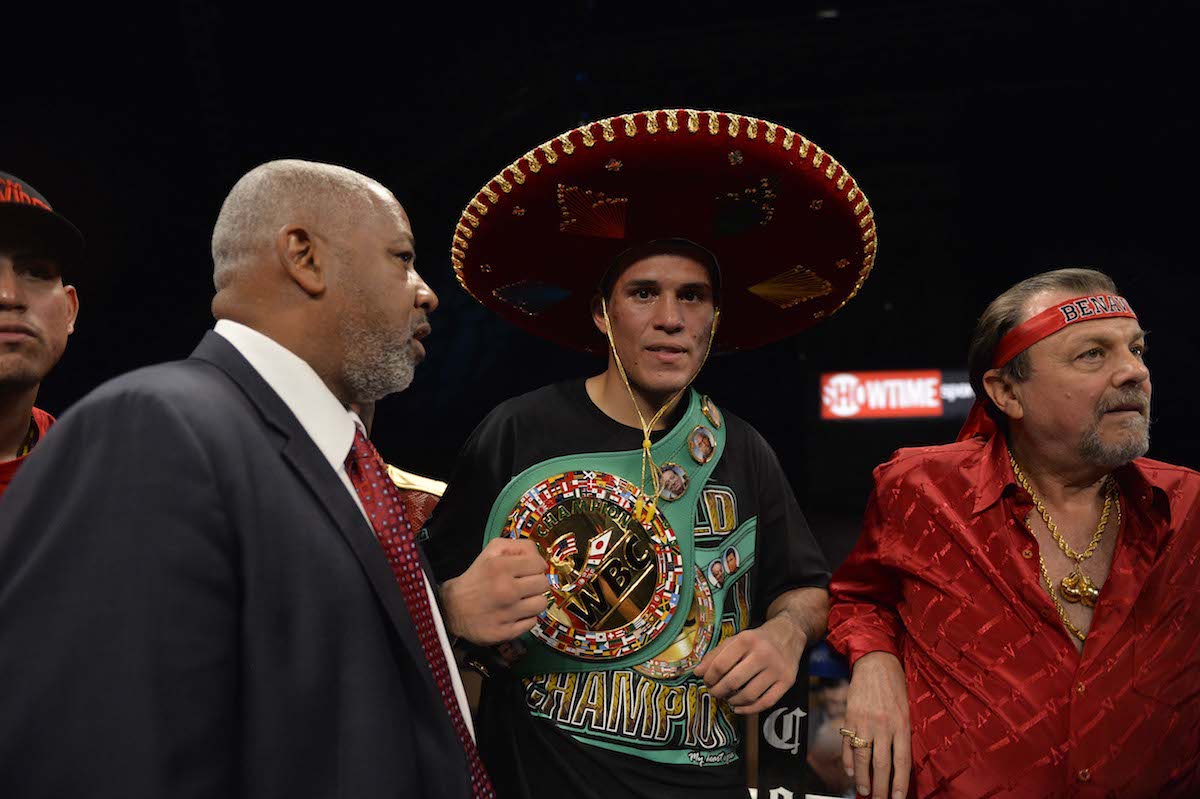 LAS VEGAS (Sept. 8, 2017) – At 20 years, 9 months old, David Benavidez became boxing’s youngest world champion – and the youngest ever in the super middleweight division – with a split decision victory over Ronald Gavril on Friday night on an exciting night of 168-pound action on SHOWTIME BOXING: SPECIAL EDITION from The Joint at Hard Rock Hotel & Casino. See the video of the decision via Twitter link HERE.

Benavidez (19-0, 17 KOs) placed the previously vacated WBC Super Middleweight belt around his waist after winning the title against former European amateur standout Gavril (18-2, 14 KOs) in what Benavidez later described as quite possibly the “Fight of the Year.” One scorecard had Gavril winning 116-111, with Benavidez winning on the other two scorecards, 116-111 and 117-111 in the event presented by Premier Boxing Champions.

The 31-year-old Romanian Gavril, who trains at Mayweather’s Gym in Las Vegas by Eddie Mustafa Muhammad, sent Benavidez to the canvas with a left hook with just 50 seconds left in the wild 12th and final round.

“I feel I won the fight. I dominated the pace. I can’t say anything else other than it was up to the judges,” Gavril said, who was watched by his promoter all-time great Floyd Mayweather from ringside. “The only thing I can do is to ask for a rematch.”

Benavidez, who turned pro at age 16 and only had 15 amateur fights, took control of the fight early on, but Gavril seemed to gain steam mid-fight, out-boxing and being more active than Benavidez in the seventh, eighth and ninth rounds. In rounds 11 and 12, Benavidez out-landed Gavril 66-35 overall and 53-14 with power punches.

“I felt my performance was good except for the last round when I got too anxious and wanted to knock him out,” Benavidez said. “I let my young side takeover and I wanted to give the fans a great fight. I didn’t really feel hurt but it was a shock knockdown. I know to be careful and more cautious. It was a learning experience.”

In another super middleweight contest, Abie Han suffered a devastating accidental head-butt against J’Leon Love at 1:02 into the eighth round and the fight went to the scorecards. One judge had Las Vegas’ Love winning 79-73, and the other two 76-76 making the decision a technical majority draw.

Following an exchange of punches, Love (23-1-1, 13 KOs) leaned in and the two fighter banged heads in violent fashion. Han (26-3-1, 16 KOs) of El Paso, Texas, was left stunned and fell to the floor as blood gushed from his forehead above his left eye and he was immediately checked on by referee Kenny Bayless.

Han, who left the arena sitting up on a stretcher before hearing the decision, won the statistical battle in the ring. Han landed more blows (78-47 overall, 20-12 jabs, 58-35 power) and did so more accurately (24 percent to 17 percent overall, 16 percent to eight percent jabs and 30 percent to 27 percent power).

SHOWTIME boxing analyst Al Bernstein had Han winning by one point at the time of the stoppage.

“I can’t rate my performance as great because I didn’t get a victory, I got a draw,” said Love, who once trained at the famed Kronk Gym in Detroit under Hall of Fame trainer Emanuel Steward.

The 29-year-old Love ended nearly a one-year layoff with his return to the ring. “I’m kind of rusty but I feel like I pressed the action and tried to take it to him,” he said. “Other than that I feel like I landed the cleaner shots.”

Plant, who resides in Las Vegas by way of Ashland City, Tenn., was the more active fighter against the 31-year-old switch-hitting journeyman Hernandez, who took the fight on just eight days’ notice after Alan Campa dropped out. Plant jabbed effectively (81 of 271, 30 percent) while neutralizing Hernandez’s usually effective jab (46 of 325, 14 percent). Plant was also sharp with his power shots landing 44 percent to Hernandez’s 19 percent.

“I’m very pleased with my performance,” Plant said. “I boxed well and I dictated the pace. I pressed when I needed to press and boxed when I needed to box. I felt I put on a great show for the fans. I want to be star in boxing.  I know with hard work I can accomplish anything.

“Hernandez is tough, I sent him with everything and he stood tall and my hats off to him. He’s a tough competitor.”

Hernandez, from Phoenix, Ariz., suffered a cut under his left eye in the third and it caused him problems throughout the fight, opening up and bleeding over the final two rounds.

“All respect to Caleb Plant on his performance tonight,” Hernandez said. “He put on a solid fight and he’s got a great future. I was happy I was able to stay in there and last the entire 10 rounds.

“I felt Caleb won, but I don’t think it was 10 rounds to none. But that’s not for me to decide. It’s all up to the judges at the end of the day it only matters what they think.”

Plant added: “I’m ready to step up in competition and fight anybody in the top 10 of the super middleweight division. I got my eye on Benavidez and all the other world champions. I’m coming!”

Friday’s tripleheader will replay on Sunday, Sept. 10, at 9 a.m. ET/PT, and Monday, Sept. 11, at 10 p.m. ET/PT on SHOWTIME EXTREME and will be available on SHOWTIME on DEMAND® and SHOWTIME ANYTIME®.