LAS VEGAS – December 17, 2022 – Mayweather Promotions’ Sin City Showdown is back on Saturday, December 17th at The Chelsea inside the Cosmopolitan immediately following Premier Boxing Champions’ action-packed bouts. Fight fans will be able to enjoy two fight cards under the same roof on the same night.

Kevin “Thunderstorm” Johnson (12-2, 8KOs) will be facing Cristian Baez (18-2,17KOs) in the main event of the return of Mayweather Promotions’ Sin City Showdown immediately following Rivera vs. Martin. Johnson is coming off a stellar performance on October 8th where he defeated Alejandro Frias Rodriguez by a 6-round knockout. Johnson, the Michigan native, is ready to continue his win streak on the night of December 17th.

Johnson moved from Detroit to Las Vegas in 2010 in pursuit of achieving his boxing dream. With the support of his oldest sister, Johnson was introduced to the Mayweather Boxing Club and began frequenting the gym until he got the opportunity to get noticed by the legendary late trainer Roger Mayweather. He was a great inspiration to Kevin and instilled his drive and determination to succeed at the professional level, alongside his current trainer Otis Pimpleton.

Undefeated Arizona native, Micky Scala (6-0,4KOs) will also be returning to the ring as, he is set to meet Ricardo Villalba (20-6-1,8KOs) in a 6-round Welterweight bout. Scala is returning to the ring off of a spectacular 1st round TKO victory back in May. This prospect is eager to get back in the ring and continue his growing resume.

The return of Sin City Showdown will also feature Mayweather Promotions’ growing stable Jalil Hackett (4-0,3KOs), and Robert Meriweather (2-0,1KO). To catch all the live action-packed night be sure purchase your tickets on ticketmaster.com or tune in live on BXNG TV, www.bxngtv.com.

Tickets for the live event are on sale now for $30 and can be purchased through ticketmaster.com. Doors open at 4pm on Saturday, December 17th. Sin City Showdown will also be streamed live on Vyre Sports BXNG TV. Visit: mayweatherpromotions.com for event information.

BXNG TV Is the newest streaming channel for the next generation of boxing. View boxing’s stars of tomorrow from anywhere around the globe, and on any device. Brought to you by Vyre Sports, BXNG TV is the new home for watching boxing’s next era of champions. 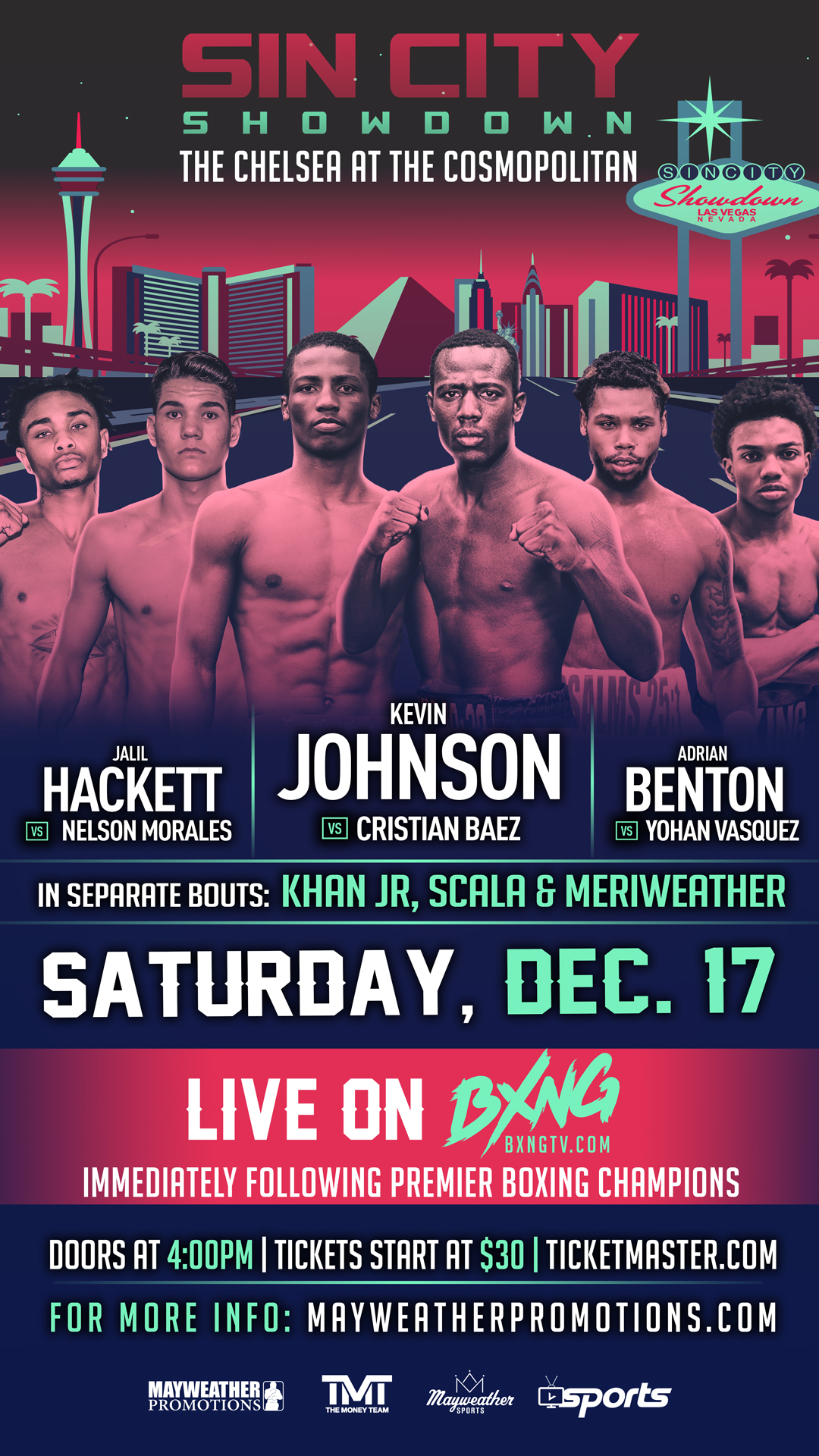