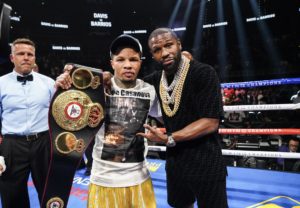 Gervonta “Tank” Davis (25-0, 24 KOs) continues to work toward sealing his spot in boxing history. On Saturday June 26th he took another step towards boxing greatness by taking the WBA Super Lightweight championship belt from Mario “El Azteca” Barrios (26-1, 17 KOs) in an 11th round TKO.

The bout was scored in favor of Davis as 96-92, 97-91, and 96- 92. The win puts Davis among those elite fighters with championships across three divisions, as he also holds belts in the WBA lightweight and super featherweight divisions.

The fight was an electrifying spectacle from the beginning, with vocal fans making their presence known from the moment the gates opened. Barrios walked out to the sound of tribal drumming in a feathered pink-and-blue, Aztec-inspired, fight costume flanked by acolytes in tribal headdress. Davis took to the ring in a gold-and-white fringed and sequined sweatsuit, with Lil Baby by his side performing “That’s Facts.” Mayweather was also present ringside, sporting a massive gold and diamond-encrusted, multi-rope necklace, and giving Davis advice throughout the night in addition to trainer Calvin Ford’s instructions. 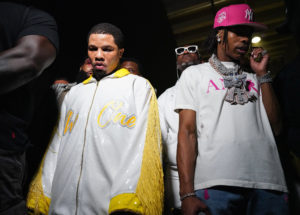 The fight started with Barrios taking most of the first half of the fight on the unofficial score cards, as Davis continued to assess and measure his taller, rangier opponent. Creating worry for Davis fans and hope for Barrios fans, the early rounds put Barrios solidly ahead and gave Davis a deficit that needed to be addressed decisively in the later rounds.

Barrios, who is trained by the esteemed coach Virgil Hunter (best known for training the legendary Andre Ward), is known to have fine boxing skills and an impressive boxing IQ. Barrios took the early rounds by out-punching Davis and walking him down, while Davis looked the patient hunter while he worked on taking Barrios’ jab away. However, coach Calvin Ford and mentor Floyd Mayweather made sure that Barrios’ advantage did not last for long. 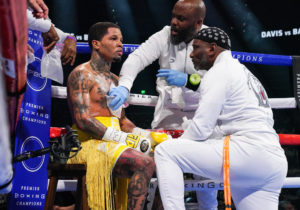 By the fourth round, Davis started to apply pressure and back Barrios down. In the next few rounds, the action picked up considerably, with Davis asserting himself and closing the distance, but Barrios still holding his own. Barrios got a cut over his right eye in the fifth, but Davis remained behind on unofficial cards because of the early rounds. In fact, Showtime’s boxing analyst Steve Farhood put the unofficial score card up 5 rounds to 1 in Barrios favor after six rounds.

Davis started to erupt in the seventh round, as the crowd went wild when he started landing double jabs. Then Davis came on fire in the eighth round, which turned the momentum of the fight around in his favor. One minute into the round, Davis dropped Barrios to the mat with a right hook. Within seconds after the match resumed, Davis seized his advantage and downed Barrios again, this time with a left hook. These were the first times that Barrios had been dropped in his career.

Davis then sought to finish him off for good with an aggressive attack, an onslaught of punches, for the rest of the round, but Barrios managed to hold his ground, survive and make it to the bell. But with the knock-downs, after the eighth the unofficial card scored the match even. 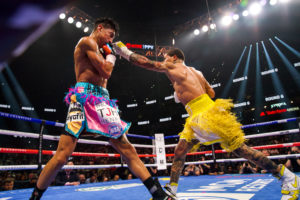 But it wasn’t over by any means. Barrios’ corner told him that Davis had used up his energy in the eighth. In the ninth, Barrios showed his warrior spirit and came back strong. He hit Davis with a left hook early in the round and Barrios became the aggressor, with Davis up against the ropes multiple times. This was a comeback round for Barrios, and at ringside Floyd told Tank for the world to hear that he was down on the unofficial score card after that ninth round and needed to step up and take the fight over.

The eleventh round was a fast-paced, non-stop melee with the fighters going toe-to-toe trying to take each other down, with Barrios signaling Davis to “bring it on” and Tank answering with big power punches in the latter part of the round. In the corner, Floyd told Davis that he won that round, and needed to win the next one. 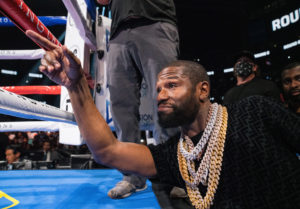 The action-packed fight continued to the eleventh round. The intensity continued, and Davis caught Barrios with a left uppercut to the body at 1:10 and sent Barrios to the canvas for the 3rd time in the fight. Barrios, who was clearly in pain from the shot, got up again but was unable to stop Davis’ onslaught. Seconds later, at 0:53, Davis landed another left that buckled Barrios against the ropes, at which time veteran referee Thomas Taylor stopped the fight by TKO, and Tank proceeded to perform a backflip off the corner ropes. 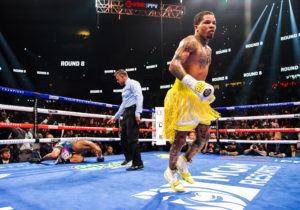 Before the fight, there was a question as to how size would play a factor in this match-up. Davis’ moving up two divisions to face a larger Junior Welterweight in Barrios had people doubting who was going to come out victorious on fight night. Davis allowed during the press conference that Barrios’ size was a factor in how he approached the fight. Still, Tank prevailed decisively in the end, and both fighters gave the crowd an electrifying performance. 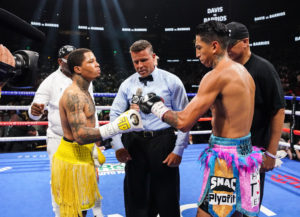 With this victory, Davis once again showed his tremendous punching power, and his path to greatness, having gone up to take his third belt. In addition, the sold-out fight represented the best of boxing, in terms of the huge fanbase that turned out in Davis’ adopted Atlanta homebase and in the exciting spectacle put on by two highly accomplished professionals. Both fighters also exhibited admirable sportsmanship, showing each other great courtesy and respect after the stoppage, and they gave fans everything and more than one could have asked for in a night of boxing. 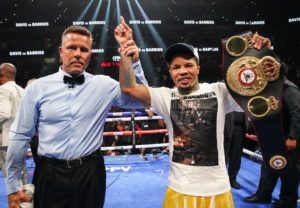 Tank said he missed a lot of shots looking for clean shots, but “Eventually I caught up with him.” He remained confident knowing that “If I catch him, I know for sure I’m cracking. So when i caught him, it showed.” Tank also thanked Floyd for his guidance. Floyd said “Show me that you’re great.” And Tank did just that.

Barrios on his part showed a lot of class. “I’ve never been a hater, congrats to Tank, and it was nothing short of an exciting fight. He walked away tonight the better man, but I’ll be back.”