“I hit him with one of these and I’m going to knock his whole nose off… they know he can’t last down the line,” – Davis

“It’s going to say a lot about my legacy when I knock him out…I think he’s going to run right into something big,” – Romero

from Barclays Center in Brooklyn Headlining 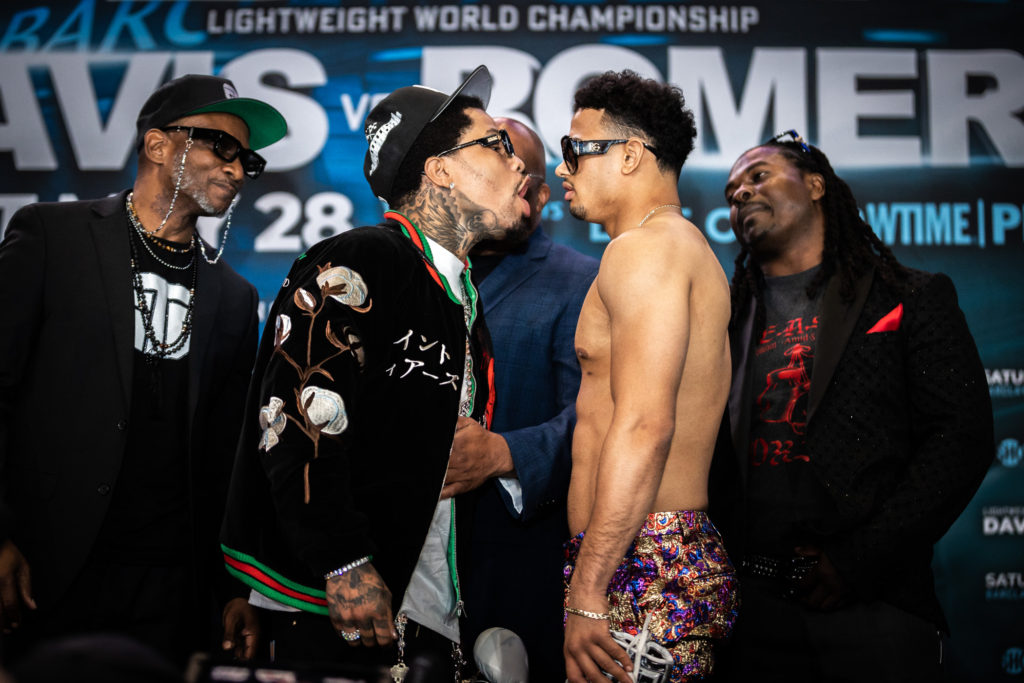 The unbeaten rivals squared off ahead of their championship clash and declared their dislike for the other and intention to deliver fireworks on Memorial Day weekend in Brooklyn. During the ceremonial stare-down, the fighters did more than look at each other, waving their hands in the other’s face and showcasing the fiery rivalry that should make their fight so entertaining. A three-division world champion, Davis returns to Barclays Center where he delivered a star-making performance in 2017 as he thrilled the Brooklyn crowd by stopping Jose Pedraza to capture his first world title.

Tickets for the live event, which is promoted by Mayweather Promotions, GTD Promotions and TGB Promotions, are on sale now and can be purchased through seatgeek.com and barclayscenter.com. Tickets are also available for purchase at the American Express Box Office at Barclays Center.

Here is what the press conference participants had to say Thursday from Barclays Center in Brooklyn:

“We’re ready and we’ve been in camp. This isn’t our first time getting ready for ‘Rolly’. We saw how he choked up when the lights are in his face. We’ll see how he reacts when everyone is cheering against him on fight night.

“Some people are made to do it, and some people just talk their way through it. We know what we’re coming here to do on May 28.

“We’ll see what this guy brings on fight night, under the bright lights. I had to walk through the door when it was time and become the man. Come fight night, it’s time to step up to that plate.

“This isn’t going to be an easy walk. Like my coach said, it’s about respect. I’m a man and he’s a man. We have our differences.  We’ll see who’s the last man standing come fight night.

“I won my first title here and I’m grateful to be back at Barclays Center. I just want to be the best that I can be. It’s time for me to show that I’m the man in this sport. I believe that I’m the face of the lightweight division and I just want to live up to that. My goal is to go out there and be better than I was yesterday.

“He’s just worrying about power, he’s not working on anything else. They’re only plan is to knock me out. I hit him with one of these and I’m going to knock his whole nose off. They just keep talking about knockouts and trying to get me out of there early, because they know he can’t last down the line.”

“I think ‘Tank’ is an amazing fighter, but this is going to be the easiest fight of my career. It’s going to say a lot about my legacy when I knock him out. ’Tank’ gets punched a lot. I think he’s going to run right into something big.

“I’ve always been underrated. May 28, you’re going to see my ring IQ on display. He’s the best fighter at 135 pounds and he’d be the best if he were at 130 pounds. It doesn’t matter to me though. I know what I’m capable of.

“I’m already a star otherwise I wouldn’t be in this position right now. I’m one of the few fighters to get to headline a pay-per-view 14 fights into my career.

“Everybody is underestimating me. I started boxing at 17 and I got my first belt seven years in. I’ve gone in there and beat up everybody. ‘Tank’ is getting knocked out and that’s that.

“Gervonta keeps talking about these skills he has, but I just see his face getting swollen up after every fight he has. He just bullies smaller opponents. He’s not that special. We’re ending his little reign and he can go retire.

“Gervonta Davis is ending up on the canvas knocked out. That’s what I can guarantee.”

“This is a big moment because this is where it all started  for us. This fight is about unfinished business. This is our second time at this mark.

“I don’t have to worry about ‘Tank’. I want everyone to tune in or come down to the Barclays Center. Baltimore, New York, show up. Because you’re about to see something.

“These two guys have been going at it for years. It’s not about the ‘0’ this time, it’s about respect. I see ‘Rolly’ changed his look this time. It’s cold out there though. You better be ready. Because ‘Tank’ is back.”

“As far as camp is concerned, ‘Rolly’ is dialed in and ready to go. We’ve had a great camp. Skill-wise and strength and conditioning-wise, his mindset is the best it’s ever been. I think we’re in for one of those record-breaking performances.

“Like they say here in Brooklyn, we’re the new kids on the block, but we’re not new to fighting. Somebody’s ‘0’ has got to go. This is a fight that’s ending in a knockout, there’s no other way to put it.

“Much respect to the Davis camp. They’ve put their work in and done their time, but we’re just here to derail that train. That’s exactly what we’re going to do.”

“When you look at these two fighters, both of them are tremendous punchers. But what I think it’s going to come down to is who can take whose shot. Because in boxing, as we know, anything can happen.

“Being in boxing for over 25 years at the highest level, I’ve seen it all. When I look at how this fight will play out, ‘Rolly’ is a big underdog and ‘Tank’ is the favorite for a reason. ‘Tank’ has shown that right now he’s one of the best fighters in the entire world. In my mind, I know this is a very dangerous fight for him. I use Floyd Mayweather as an example. Coming through the ranks, I’ve seen him get hit with big shots. Whether it be Victoriano Sosa, DeMarcus Corley, Shane Mosley, or Marcos Maidana, Floyd was able to show you that he had a Hall of Fame chin. Come May 28, when those two get in there and go to war, we’re going to find out who has the better chin.

“We know that when it comes to skills, there’s no doubt that ‘Tank’ Davis has the best skills in the entire sport. We’re going to find out come May 28 if ‘Rolly’ hits him on the button, does ‘Tank’ have a strong chin or not? Also on May 28, Rolly has never been hit by a tank before. How is he going to respond? Will he be able to take it? Tune in May 28. I guarantee you this fight is going to end in a knockout.”

“It’s a cold and rainy day in Brooklyn, but May 28 is going to be a hot night at Barclays Center. The eyes of the boxing world will once again be focused on this arena, and BROOKLYN BOXING is ready for another big night of fights.

In 2012 Barclays Center brought boxing back to Brooklyn for the first time since 1931. We’re looking forward to building on this program’s legacy for hosting major fights with the WBA World Lightweight title on the line.

This will be Gervonta’s third fight at Barclays Center, after he won his first and second titles at Barclays Center in 2017 and 2019. Welcome back to Brooklyn Gervonta. I know that I can speak for the fans in the toughest of New York’s boroughs when I say that we’re looking forward to having you headline here for the first time.

“To ‘Rolly’ I think you’re going to find that there’s a special energy fighting here and we’re excited to see it in the ring.

“The partnership that we have built with Premier Boxing Champions has been instrumental in providing a great platform for this sport. Barclays Center has had over 20 fight nights on SHOWTIME and we’re tremendously proud to have your platform showcase our venue to the world. I hope to see everyone on May 28 for another big night of boxing.”

“What we’re doing here at SHOWTIME is delivering competitive fights from top to bottom on each card. For the 22nd time on SHOWTIME, we’ll be doing that from Barclays Center and we’re thrilled to be back here. We have a long history here. SHOWTIME televised the first Barclays Center boxing event ever in October of 2012 between Danny Garcia and Erik Morales. Over the last eight years, Barclays Center has made a strong commitment to big-time boxing. May 28 will be the 40th boxing event the Barclays Center has hosted in the last 10 years. That’s quite a commitment and something that has been invaluable to the sport of boxing.

“This will be Gervonta’s 12th appearance on SHOWTIME. You’ve seen ‘Tank’ grow up literally in front of your eyes from pay-per-view pre-shows to fights overseas to championship fights and now his fourth pay-per-view headlining event. I remember the first time I saw ‘Tank’ fight in person. It was six years ago almost to the day. April 1, 2016, off TV undercard in D.C. underneath Adrien Broner. Floyd, Leonard Ellerbe and Mayweather Promotions told me this was a kid to watch. Well, they were certainly right about that. Less than a year later, he won his first title here at Barclays Center and now six years later, he’s headlining his fourth PPV.

“’Tank’s’ youth, his skillset, his box office appeal makes him one of the most popular fighters and one of the biggest draws in the sport. He’s sold out venues in L.A., Atlanta, Baltimore, and now his first headlining opportunity here in Brooklyn. Every time Tank steps in the ring, it’s must-see T.V.

“In this fight, ‘Tank’ has got another big personality in front of him. ‘Rolly’ Romero, 14-0 with 12 KOs, the number one contender in the WBA. It’s not an exaggeration to say that ‘Tank’ has never faced an opponent like Rolando Romero. He backs up his trash talk with brutal KOs. We’ve seen it on SHOWTIME. His debut on SHOBOX back in 2019 was a huge highlight reel knockout and ever since then, he’s established himself as one of the biggest punchers in the sport. He’ll be making his fifth appearance on SHOWTIME.

“If you ask Rolando, he says he gets his punching power from his dad, Rolando Sr., who was born and raised in Cuba and was a decorated boxer in that country’s amateur system. ‘Rolly’s’ father never got a chance to fight for a world title, so I don’t have to explain to you how meaningful an event this is for the Romero family.”