DAVIS VS. WALSH BLOCKBUSTER CONFIRMED FOR MAY 20 AT THE COPPER BOX ARENA 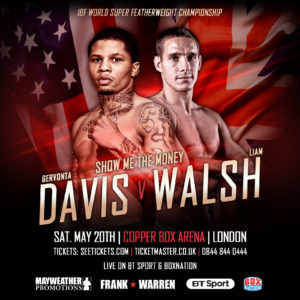 Davis, known as simply ‘The Tank’ for his brutal knockout power, spectacularly announced himself as boxing’s next superstar with an unforgettable seventh round stoppage win over former Champion Jose Pedraza in January and is relishing making the first defence of his crown on foreign soil.

“I always wanted to come to the UK and fight,” said Davis. “Many of my fans are based there, so I’m just excited that they will be able to come see me fight in their own backyard.

“Liam Walsh is a tough contender, and I’m hoping he brings it. I will be well prepared for whatever he does, and believe me when I say that I will put on a great show.

“That IBF belt is very happy at home with me and it will be staying with me for a long, long time. To all the people that have been messaging me positive things on my social media, thank you. Keep supporting me and I’ll fight for you.”

Slick southpaw Walsh outclassed Andrey Klimov back in October to confirm his mandatory status as the number one contender and has not put a foot wrong in his career to date, winning the British, Commonwealth and WBO European belts along his 21-0 journey.

“I’ve waited a long time for this opportunity and I’m ready to seize my moment and win a World Title. Years of hard work in the gym has got me to where I am today and I’m not going to waste this golden opportunity. The Farmy Army will be out in full force to push me on to glory.”

Tickets for this unmissable showdown are available NOW!