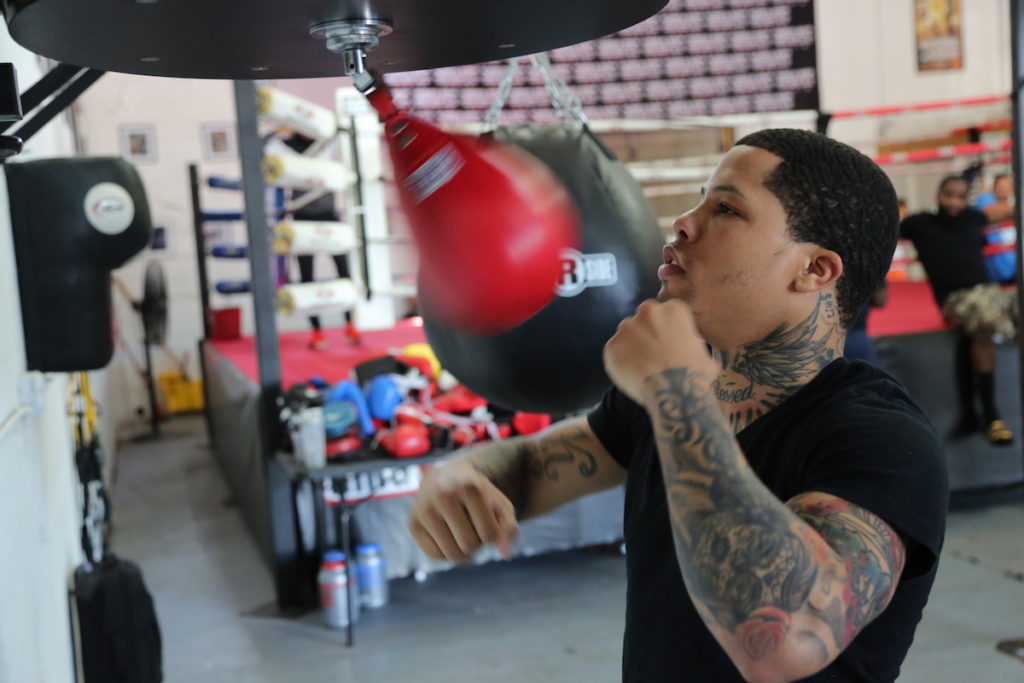 Tickets for the live event, which is promoted by Mayweather Promotions, DiBella Entertainment and TGB Promotions, start at $50 and can be purchased at ticketmaster.com, barclayscenter.com or by calling 800-745-3000. Tickets can also be purchased at the American Express Box Office at Barclays Center. Group discounts are available by calling 844-BKLYN-GP.

Broner and Davis are sharing camp in West Palm Beach for the first time under the guidance of head trainer Kevin Cunningham, a former St. Louis police officer who has worked with former world champions Devon Alexander and Cory Spinks.

Here is what the fighters, plus coach Cunningham, had to say about camp, April 21 and more:

“I felt like it was time to change. I hear people say, ‘You are expected to change but you don’t, that’s why you end up in the same spots over and over’. So, I have to change something to get a different result. That’s why I had to step outside of the box and go for it.

“I had to change things. I had to add to my repertoire because I’m getting all that I can do out of what I’m doing but I keep coming up short for these fights that I’m supposed to be winning. So, it was time for a change.

“Looking back at all of my defeats, the only real punishment that I’ve taken in this sport was against [Marcos] Maidana-I got a fractured jaw. In the Shawn Porter fight, he outwrestled me and in the Mikey [Garcia] fight, he just outworked me. So, it’s time to add to my team and that’s why I got coach Kevin Cunningham. He’s going to bring out the best of Adrien Broner.”

On why he chose Kevin Cunningham?

“I’ve known Coach Cunningham since my amateur days. We used to go up to St. Louis all the time and fight in his tournaments, on his shows. I have even fought for St. Louis in the Ringside Tournament. It was a great experience.

“I’ve known Coach Cunningham for a long time. He is the real deal He is not going to B.S. me. He’s going to keep me on my toes. I need that.

“There are coaches that change when their fighters get to certain levels. They still coach, but they don’t provide the structure the fighter needs. When I was fighting at 130, 135, Coach Mike [Stafford] will be at my door yelling ‘Get your butt up. We have to run. We have to train. Get up! Get up!’ But time went by and things changed.

“Coach Mike stopped being a coach and started being more of a friend. I needed him to keep being my coach. I need someone to keep me in line. Don’t get me wrong, he’ll always be like a father figure but when it comes to training and my career. I needed a change.”

“I’m very happy with this camp. It’s just what I needed. I’m catching up with sleep, eating well. The isolated training is really good. I love everything about this camp.

“Training in isolation is really good for me. I told everybody that they were not coming to Florida with me, that I will see them all after the fight and that if they really love me they will understand the situation and they will be cool with it.

“I actually did a camp with Coach Kevin before when Devon Alexander fought Timothy Bradley. And I’ve seen the way he is. We had our arguments and he cussed me out almost every day, but I was just missing the structure and that’s what I need.”

On how he felt after losing to Mikey Garcia…

Reflecting on his career…

“I started my career young. I won titles in four weight classes. I’ve accomplished a lot and there’s still more to come. I got a lot of fighting left to do.”

On why he decided to do training camp with Kevin Cunningham…

“I was actually going to go to Colorado to train, but Adrien invited me to come down here to West Palm Beach to check out the camp. He said I should come to Florida to train with him and Kevin. So I came down, I saw Kevin’s routine and I really liked it.

“There were a lot of distractions in Baltimore and I think they were a problem for me. I needed to straighten my head and focus on the things I have to work on. It was time to set my camp somewhere else.

On becoming one of the youngest champions in boxing…

“I was one of the youngest world champions in boxing. It is not that I was not prepared for it. I was just so young and it happened so quickly. I had to adapt to it. Live up to the hype. It was hard.”

On his opponent, Jesus Cuellar…

“I’m not really into researching my opponents-or other fighters other than the ones that I like. I just train hard and fight who is in front of me.  I know a little bit about him [Jesus Cuellar]. I know that he can hit, that he’s not going to back down and that he’s a tough opponent. I believe he’s my toughest opponent to date. On April 21, we will see if he is ready. I know for sure I will be.”

On life in training camp when not at the gym…
“We have a big house that the coach provided for us. We all live together-Adrien and I. We go swimming and to the movies. We just chill. We are being responsible. No South Beach, no clubbing. Just training hard.”

On his relationship with Adrien Broner…

“What people don’t know is that I’ve been around Adrien since I was younger. I looked up to him. When Adrien came on the scene, he was super sharp and fast. I remember him. He used to come to the amateur tournaments.

“Adrien is like a big brother to me. We are just like a little brother, big brother. We are very competitive. We do not say it but we always want to outdo each other. For example, I usually run faster than he does, but sometimes he beats me. Yesterday he ran so fast I could not catch him. So today, I took the lead and ran even faster. We push each other to our best.”

On his plans for the future…

“I want to win more belts. I want to become a big star in boxing. I am going to put my work in the gym, put on a great performance in the ring and get back on track to become a world champion again.

On his relationship with Adrien Broner…

“I’ve known Adrian Broner for a very long time. I think I’ve known him since he was like eight years old and 60 pounds. He’s always been an extremely talented fighter. When he was a kid he was one of the most talented kids. He has always had boatloads of talent.”

On Broner’s shortcomings as a fighter…

“I think sometimes, he could be a little more focused and have a little more discipline in a lot of the different things he’s doing. I think he’s trying to turn the corner and get things moving in the right direction.”

“There are several things that could cause him to lose focus and come up a little short in some of the major fights. Some of it is the focus but there needs to be a little more discipline in terms of the training aspect and more structure. I think that’s what we’re working on here.”

On what he can do to improve Broner’s game…

“I think coming over here with me, he’s finding a lot more structure in the training aspect. It’s a totally different training program that I have him doing. I think that he’s ready for some new leadership. He’s ready to be a little more disciplined in his profession and I think it’s going to show on the 21st.”

On why this time will be different…

“I’ve heard from him like everybody has, but this time Broner really has done everything possible to rectify the situations that needed to be straightened out to help him propel his career and get back moving in the right direction – and it’s not just his boxing career; it’s also as a person – his personal life – and I’m here to help him out with that. He’s really working hard to get it right this time.”

“I’m known to be a stern and disciplined trainer, coach, and teacher. I’ve got a military and police background, so I don’t play a lot of games. We’re serious and we’re about business. When Broner made the decision to come with me, I knew that he was ready to take his career seriously because he knows what it’s like being here with me. He has to be about business, he has to be serious, and he has to be focused and disciplined. He made the choice to have me take over his training and take the lead as his head trainer and that’s what he’s getting when he’s dealing with me.”

On how he and Broner came together…

“A couple of weeks after the Mikey Garcia fight, he called me and he told me he was thinking about making some changes and that he wanted me to consider being his guide and taking the lead as head trainer. He asked me what I thought about that and I said, ‘You know what you’re getting when you come to me and if you’re going to be serious and focused about this, I’ll give you all I’ve got.’ And he said, ‘I’m serious.’ We started training together before camp started and I just saw a different look in his eyes. Ever since camp started he’s been nothing but hard work, dedication, and focus.”

On if he had any fears about their partnership…

“I told him upfront what I expected and what we needed to do and how things had to go. I told him that if he wasn’t ready to adhere to what I’m expecting, he shouldn’t waste his time or mine. He has done everything I’ve asked of him. Everything and more. He’s going to show that he’s ready to get himself together. He’s going to show the world on April 21 that he’s rededicated himself, he’s ready to reclaim the thrown.”