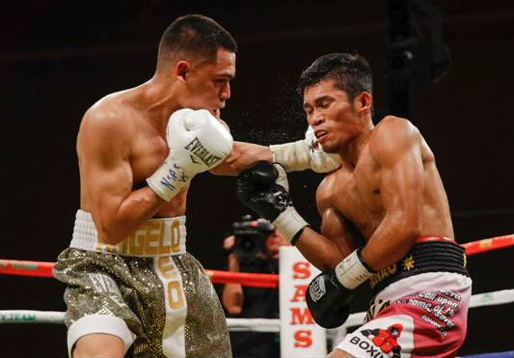 “It felt good to make my SHOWTIME debut tonight, to show my fans and the rest of the world my skills and now it’s just up from here,” Leo said. “He was a tough fighter. I’d give my performance an eight. He had a punch. I had to stay cautious in the beginning and take my time and get on the inside.”

Leo averaged 80 punches thrown in the final three rounds and out-landed Tabanao 81-20 overall and 79-17 power in the same span. Leo was especially prolific going to the body as he held a 76-22 margin in body connects.

“Leo is a good fighter,” Tabanao said. “I know I lost the fight. I did what I could but he was really good. I started strong but on the second half he took over. He fought very well on the inside. He’s really good at short range. He deserved the win.”

Leo said he needs to work on his defense. “I need to keep it a little tighter and not leave any room for opportunities for my opponent,” he said. “I’m ready for whatever my team brings to me for my next fight. I know [Mayweather Promotions CEO] Leonard Ellerbe has my back and my best interests.”

In the co-feature, Xavier Martinez (14-0, 10 KOs) of Sacramento, Calif., put on a clinic in recording a third-round TKO over John Moralde (21-3, 11 KOs) in a scheduled 10-round super featherweight bout.

After dominating the first two rounds, Martinez sent Moralde to the canvas with a short left hook, Moralde quickly jumped to his feet but appeared dazed. After 20 seconds and another onslaught of punches, referee Tony Weeks had seen enough and he officially waved off the fight at 1:11 of the third round.

“I came into this fight wanting to make a statement,” Martinez said. “It’s SHOWTIME and that means it’s go time. I wanted to show everybody who I am and I feel like I did that tonight. I wanted take him out early, I had that in my head and I did it.”

Martinez wasted no time in getting started, he landed 58% of his power shots in the first round. He continued to outclass Moralde in the second, and the third round spelled the end for the Filipino fighter.

“He kept smirking at me when we first started so I wanted to wipe that smirk off his face real quick,” Martinez said. “So it went from him smirking to him getting serious really fast. I was looking to get the knockout, but in my head I was thinking if it doesn’t happen, just keep working him. But I didn’t have to. I took him out on the third.”

“Martinez was the most explosive fighter tonight and showed his power,” said ShoBox analyst and boxing historian Steve Farhood. “Leo seemed the most mature of the fighters and showed the most dimensions. And by fighting 10 rounds we got to see what he could do, and he seems to be the furthest along of the fighters we saw tonight.”

In the telecast opener, 21-year-old Las Vegas prospect Andres Cortes (11-0, 6 KOs) scored a unanimous decision over Baltimore’s Jahmal Dyer (9-2, 5 KOs) in an eight-round super featherweight bout, despite Dyer sending Cortes to the canvas after a flash knockdown in the fourth round. The scores were 78-73, 79-73, 78-74.

After a slow-paced first round, Cortes took control of the fight with his superior volume and accuracy. He suffered the first knockdown in his career in the fourth with 40 seconds remaining in the round, but he quickly rebounded and managed to outland Dyer 29-9 in total punches and 20-5 on power punches.

“The knockdown didn’t affect my performance at all,” said Cortes, who was fighting for the sixth time at Sam’s Town Live. “I was off balance but as you saw, I was able to come back and almost knocked him out. I got too greedy and felt like I was coming off too strong. He was a good opponent, so it was my mistake. I give my performance tonight a 6, I didn’t like it at all. I feel like I could’ve done a lot better but it’s okay.”

Dyer, who had a seven and a half-inch reach advantage, said he didn’t feel like he won the fight. “He just outperformed me,” he said. “I could have thrown more punches. IN the fourth, we were both exchanging and I just happened to catch him with a good shot.”

Cortes said he was looking for the knockout the entire fight and his defense could have been better. “I should have kept my distance a little more and that would have made the fight a little easier. I’ll be back soon and do a lot better,” he added.

Dyer said he’s back in the gym after a few days off and plans to fight again on May 4. Neither fighter had been past the sixth round before tonight.

Friday’s fights were promoted by Mayweather Promotions. The full telecast will replay on Monday, April 8 at 10 p.m. ET/PT on SHOWTIME EXTREME and will be available on SHOWTIME ANYTIME® and SHOWTIME on DEMAND®.