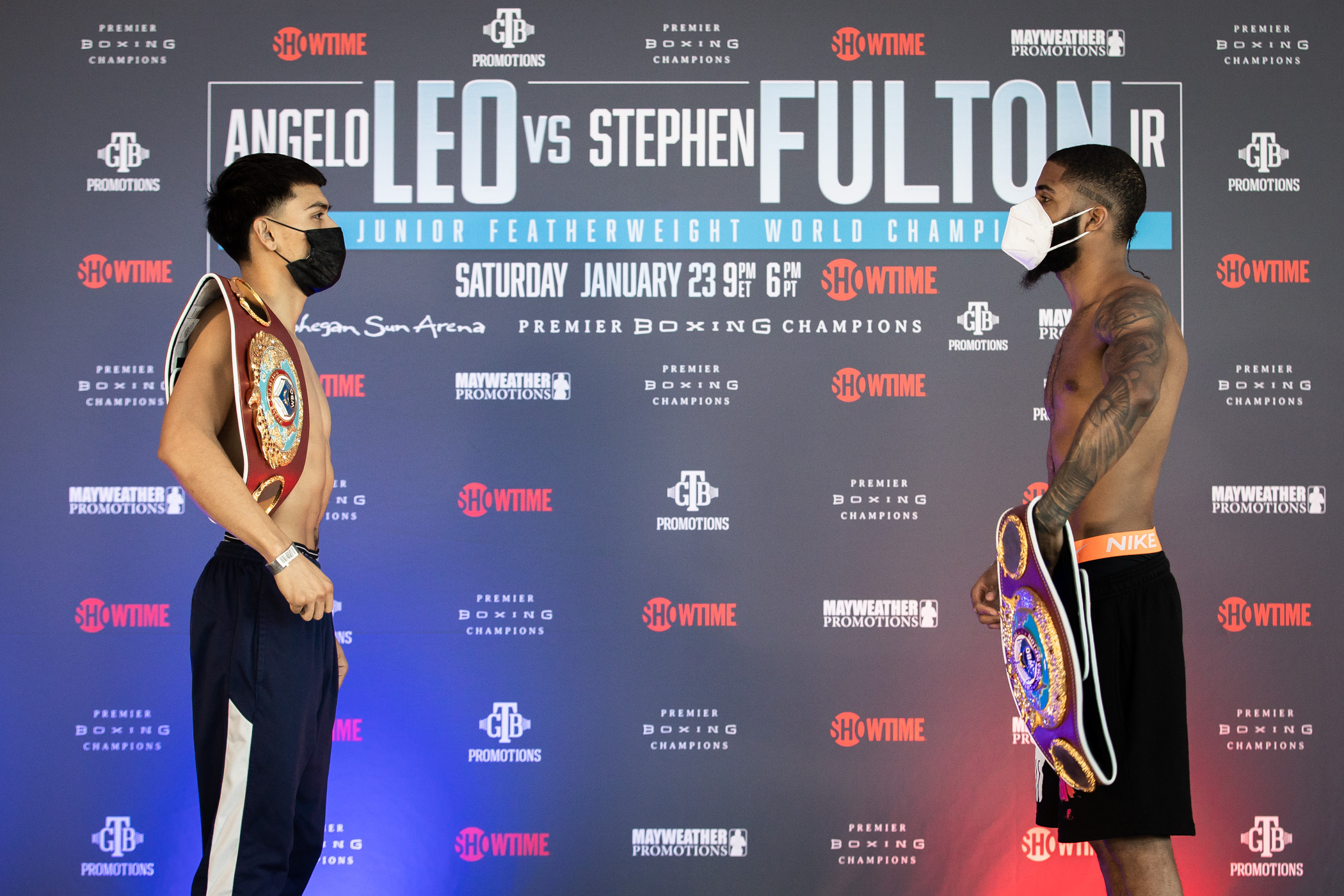 Note: Romero was originally scheduled to defend his interim lightweight title against Justin Pauldo, who exceeded the 135-pound limit. Avery Sparrow will take Pauldo’s place in the bout. Romero’s title will not be on the line.

The event is promoted by Mayweather Promotions and TGB Promotions.

Here is what the fighters had to say during Fight Week:

“Training at Mayweather’s Gym has really helped me just for the fact that you get so many different fighters coming in from all over the world, and you see so many different styles and different looks. So it’s great for me. It really pushes me. It’s a great experience for any fighter to train there.

“The one thing Floyd told me is that he was going to make me a champion in two years. He kept his word, two and a half years or less I became a world champion. He wasn’t as present for this camp, but at my last camp he deeply impacted me with tips on how to approach the fight with Fulton and his style. Tips that carried over into this camp.

“Fulton’s a good fighter. He’s got his style down pat. He likes to use his jab and control the distance. You can’t take anything away from him. He was out for a year, so I’m taking advantage of that.

“My advantages are my pressure, my work rate and my boxing IQ. I think a lot of people underestimate that about me.

“It means a lot to be the first champion from Albuquerque since Johnny Tapia. I looked up to Tapia and Johnny Romero, so to be the next is an honor. Albuquerque is a fight town, but it’s not the biggest city so there’s a lot of unseen talent there.

“The 122-pound division is stacked with a lot of talent. There’re a lot of fighters who are still undefeated, and I just want to fight the best. This fight against Fulton has taught me a lot already; it’s a huge fight for me. I know that winning this already solidifies my spot. Then, I can focus on who is the next big fight.”

“Some of the fighters I like are Bernard Hopkins, [Joe] Frazier, and Meldrick Taylor. They mean a lot to me, and to the sport of boxing and the history of Philadelphia. I watched the guys who were leading and now I’m leading. It’s just a big accomplishment to say you’re trying to lead the new era for your city.

“I don’t think much of Angelo Leo. I wasn’t impressed with his last fight. Just pressure. That’s about the only thing he brings. There are things he’s probably never seen before. I come with angles and my ability to punch off angles.

“Not fighting back in August kind of pushed me. It didn’t have a bad effect. It made me push myself to the limit in training just knowing that it was all taken away that first time.

“I would like to get past this and unify. Fights like against Leo and [Luis] Nery are easy fights for me. Their styles and my styles are tailor-made for each other. What they both do fits my style perfectly.”

“Myprevious manager wasn’t doing much as far as getting me fights, so I had to take matters into my own hands, and that’s when I decided to leave Michigan for a new life in Las Vegas. I had $3,000 in my pocket with no family or friends. I just had faith in myself and started to make my own way. It was rough in the beginning, but I made it work, and now I’m a better man, and a better fighter because of that decision. It forced me to be responsible, hence me being more mature. There was not time for games in my plan.

“Fighting an undefeated fighter like Pasillas is what great fighters do. I want to fight the best now, and Pasillas is one of the best fighters in the division. I’m not ducking or dodging anyone. I’m going to be a world champion by all means necessary. Once I beat Pasillas, I’m coming for [Murodjon] Akhmadaliev, then all the other champions.

“Fighting in the bubble was something new, but this is COVID time, so we have to get used to it. To me it’s not a problem. I’m a fighter and I don’t care if fans are there or not. I’m just ready to dominate.

“As far as the main event fighters, neither of them will be able to hang with me. I’m the best fighter in the division period!”

“Representing East Los Angeles means everything to me because I have so many people back home in East L.A. who believe in me. When I was coming up in the amateurs, I always had a big crowd attending my fights. East L.A. has always been a city known for its great boxers, and I want to continue that tradition.

“I’ve always been a monster in the weight room. I’m just a gym rat who loves to work out. My whole life outside of home is in the gym, either boxing or in the weight room. My power has improved as I’ve grown into my man strength, and right now I think I’m at my peak as a man. Everyone will definitely see some serious power coming from me on fight night.

“I don’t know much about [Aleem] personally, but I know he’s a good fighter who is ranked higher than me. We both have the same Prince Ranch Boxing manager in Greg Hannley, but I’ve never met him.

This is my second fight in the bubble. I actually love fighting in the bubble. I get so much rest, it’s very refreshing. Usually, I have my wife and kids with me, but to be honest, I need that peace and quiet and being in the bubble forces you to be by yourself, and in return I get great rest. As far as no fans in attendance, I like that as well, because I can hear my coach’s instructions. I feel I can concentrate more and relax better when there are no fans. Don’t get me wrong, there is nothing like fighting in front of a big crowd as well. I was built for this, fans or no fans.

“By far this is the biggest fight of my career because I’m right around the corner of becoming a world champion. Once I get that strap, I’m going to unify all the belts and do the same at featherweight, super featherweight and maybe even bantamweight. All I know is I’m coming for everyone.

“I don’t want to give up my game plan but best believe I’m going to do whatever it takes to win this fight. If he wants to bang, then we’ll bang, if he wants to box, we’ll box. I’ve seen so many different styles in the amateurs, there is nothing that he brings that I haven’t seen. My power is what he’s going to have to deal with.”

“To those that think the scorecards were off in my last fight, I’d say watch the fight again without any commentary and then see what they’d say.

“It’s simple, I like knocking people out. Fans wanna see a knockout. I don’t think it hurts my chances at landing the big fights in the future, but I know there are fighters in the division who don’t want to step up.

“I’ve remained focused. I know what I want in life. I’m not a weak-minded sheep that needs an outside force to make me want something. I’m ranked No. 1 by the WBA and I know I’m looking up at champions Gervonta Davis and Teofimo Lopez. But I’m still No. 1, pound-for-pound.”

“I knew this opportunity would come to me, so I have been staying well prepared. I was already on weight. I didn’t need to struggle to make weight this week. I came in here well prepared in case they needed me. Nothing was out of the ordinary for me as I prepared for this.

“I had a full camp. I was already in the gym and they called me about three weeks ago. My manager was talking to me about a fight in February so I was preparing for that. I have been getting ready to fight. I only had to cut about seven to 10 pounds over the last three weeks. I am strong, I am solid, and I am mentally prepared. Justin Pauldo was an easier fight for Romero but now I am here and it’s my turn.

“Rolly is a solid fighter but he makes a lot of amateur mistakes. He relies on his power. He lost his last fight, I believe, but the politics of boxing let him proceed with the victory. It’s in the back of our minds that we need to take over the fight to win on the scorecards. I am so blessed and grateful for this opportunity. The universe is working in my favor and I believe that if I win the fight in the ring then I will be awarded the right decision.

“I am going to take full advantage of this opportunity. I lost a tough decision against Abraham Nova in June that I thought really went my way, but I won’t cry over spilled milk. The fight was on TV so everyone saw what happened. I put seven rounds in the bank that night. But I am going to put on a great show for SHOWTIME.

“I am going to step to Rolly Romero and definitely try to knock him out. I am going out there looking for the knockout. Philly is going to have a big night between me and Stephen Fulton.”

ABOUT LEO VS. FULTON

The first SHOWTIME CHAMPIONSHIP BOXING telecast of 2021 begins at 9 p.m. ET/6 p.m. PT and features a co-main event between unbeaten 122-pounders Ra’eese Aleem and Victor Pasillas for the interim WBA title. In the telecast opener, rising prospect Rolando Romero squares off against Avery Sparrow in a 12-round lightweight bout.