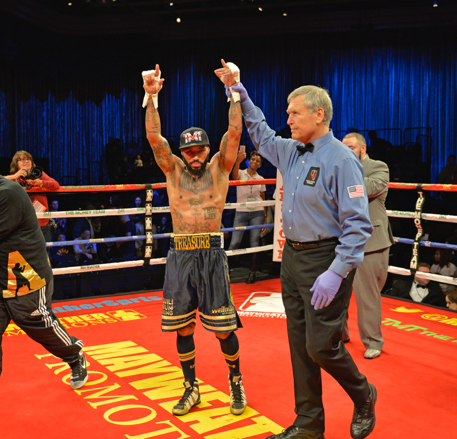 Photo Credit: Idris Erba/Mayweather Promotions
Click HERE for Photos from Idris Erba/Mayweather Promotions
LAS VEGAS (Dec. 3, 2016) – Ashley “Treasure” Theophane (40-7-1, 11KO’s ) faced Yakabu Amidu (19-9-2, 17 KO’s ) in 10 rounds of action in the main event of Mayweather Promotions’ Sin City Showdown Friday night. Theophane came out focused and on cue with his game plan, he was able to deflect most of Amidu’s punches and break his opponent down. It was a steady 10 rounds of action, Theophane was able to break Amidu down with consistent jabs and body punches aiming consistently at his target, round after round. Amidu struggled to read Theophane, which ultimately led to Theophane to his 40th win, by way of unanimous decision.
“It feels great to have a career that’s lasted this long, he made it easy to stick to my game plan. I listened to my corner who guided me and kept me on track, I couldn’t be happier with the decision,” said Theophane.
“I knew he was going to be a good opponent, I didn’t perform my best,” says Amidu. “This fight should have been in my favor, but in the end the judges decided the winner.”
Leading up to the main event, was a fast-paced blow-by-blow welterweight exchange between Mayweather Promotions’ power-puncher Maurice Lee (7-1, 3 KO’s) and Cameron Kreal (9-12-2, 1 KO). As soon as the first bell rang Krael jumped out his corner quickly putting the pressure on Lee, while Lee searched to find his groove. Krael kept delivering punches, forcing Lee to fight on the defense. By the beginning of the fifth round, Lee found an opening, landing jabs and uppercuts affecting Krael. Ultimately, Lee couldn’t seem to land enough of what normally seems like easy jabs against the quick moving and strong Cameron Krael. After 6 rounds of action the judges saw the bout in favor of Krael by unanimous decision, giving Lee the first loss of his career.
“I only had one week to prepare for this fight, the results ultimately showed how much more experience and fights under my belt, I had over my opponent,” says Krael. “I broke him down round by round, he never had a chance.”
“My game plan was to box smart, I knew he had a lot of experience so I knew I had to be smart in the ring.” Lee reflects on his performance and goes on to say, “I thought the fight was a lot closer than what the judges ruled. I definitely could have thrown more punches. We both took a lot of punches in the end. This was a learning experience and I just gotta come back harder.”
The night began with a full Mayweather Promotions showcase serving back-to-back, non-stop undercard action. Newly signed lightweight amateur Rolando Romero (1-0, 1 KO)got the first win of his career in the first round, by TKO against David Courtney(1-5, 1KO) after only one minute and eleven seconds of action. Also making his Mayweather Promotions debut Oluwafemi “The Eagle” Oyeleye (1-0) got the first win of his career, by way of unanimous decision in a 4-round Jr. middleweight showdown against Brian True (1-5, 1 KO). Lightweight Andres Cortes (4-0, 2 KO’s) furthered his undefeated record against Miguel Espinoza (3-2, 1 KO) after 4 rounds of action. The night continued on as Latondria Jones (5-0, 2 KO’s) kept her undefeated record in tact against Selena Arellano (1-2-, 1 KO), judges ruled the 4 round Jr. middleweight bout in Jones favor by UD. Further up in the lineup was a brutal welterweight showdown giving Mayweather Promotions’ Charvis Holifield (6-2, 4 KO’s) the second loss of his career versus Samuel Santana (9-11-3, 3 KO’s) which ended in a 5th round stoppage, giving Santana the win by way of TKO.
# # #
Follow on Twitter @AshleyTheophane, @ambitious_lee, @MayweatherPromo, and @SamsTownLV, become a fan on Facebook at: www.facebook.com/MayweatherPromotions.
CONTACTS:
Nicole Craig, Mayweather Promotions: (702) 807-1788
Swanson Communications: (202) 783-5500
Samantha Roper, Sam’s Town Live: (702) 450-8319
Credentials:  pr@mayweatherpromotions.com