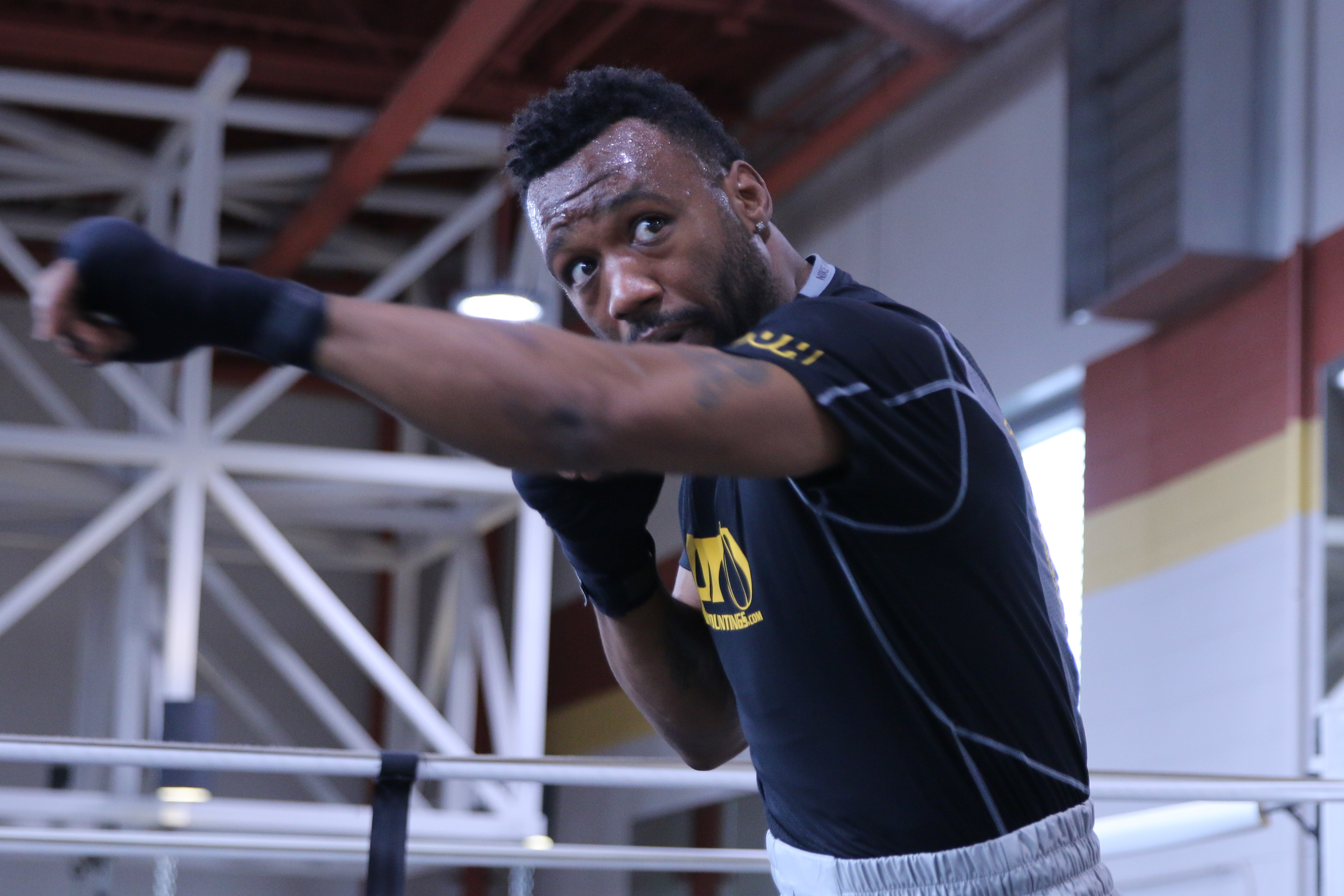 Former World Champion Heads to Las Vegas
For 154-Pound Title Showdown May 21
Against Jermall Charlo Live on SHOWTIME®
At The Chelsea inside The Cosmopolitan of  Las Vegas
‘I don’t see this being a boring fight; he’s going to bring it, I’m going to bring it’ – Austin Trout
Click HERE For Photos From Dave Nadkarni/PBC
WASHINGTON, D.C. (April 20, 2016) – Austin Trout (30-2, 17 KOs), the former super welterweight world champion, is ready to collect his second world title on Saturday, May 21when he meets IBF Junior Middleweight world champion Jermall Charlo in a 12-round matchlive on SHOWTIME (10 p.m. ET/7 p.m. PT) from The Chelsea, a one-of-a-kind 40,000-square-foot venue inside The Cosmopolitan of Las Vegas.
“It’s my time,” said Trout. “My focus is amplified 10-fold.  I’m the confident, happy Austin that fans know, but trust me, when it’s fight time I’m ready for any dogfight that comes. You’ll see Austin bring out and defeat the ‘Lion’ in him because at the end of the day I’m taking that belt.”
Tickets for the live event, which is promoted by Mayweather Promotions and TGB Promotions, are on sale now. Ticket prices start at $39, and are available online at www.cosmopolitanlasvegas.com or through Ticketmaster at (800) 745-3000 and www.ticketmaster.com.
Born in El Paso, Texas and raised in Las Cruces, New Mexico, Trout is trained by Barry Hunter and Louie Burke of Headbangers Gym in Washington D.C. Having started boxing at the age of 10, his natural talent and the ability to grow into the sport took Austin across the United States and Latin America in the amateur divisions and then into the pros. Known as one of the fiercest gentlemen competitors in the sport, he beat the likes of Miguel Cotto, Rigoberto Alvarez and Delvin Rodriguez, before losing his title to Saul ‘Canelo’ Alvarez. Trout comes into May 21 looking to claim a title in a division he’s been a true threat within for his career.
You’ve said you’ve been led to this fight, why is it important?
“Coming off of four consecutive wins, I’m not just on a comeback streak but I’m taking a full step forward. Charlo is the champ, this fight is about no more half stepping. It’s about taking on the best. Isn’t that what it’s about, being the best?”
How is camp going?
“I physically feel great. I’m really comfortable with Barry, it’s my fourth camp with the Headbangers team; Luis is there as well.  Luis helps me with pre-camp and then I shift to D.C.
“I was already in D.C. getting camp started when the rumors about this fight came true. I had been at the gym at home for pre-camp for a month and a half before hitting D.C. I was working out five times a week, running every day just getting the program going. As I said, no half-stepping. I’m already sparring, doing the work, getting right. I’m not walking through it but running and trotting through it. I’m 30, I’m at my physical peak, my talent couldn’t be any better.”
Talk about the fight and what to expect?
“Neither one of us is going out without a fight, so I don’t see this being a boring fight. It’s time for people to remember me. I’ve earned this championship shot against an undefeated bull like Jermall Charlo but I will take his belt. “
Your first professional loss was against ‘Canelo’ Alvarez in San Antonio in 2013.  What are your thoughts on that fight?

“I had a good, competitive fight with Saul – it felt like a unification bout – I was WBA champion and he was WBC champion. The open scoring was more detrimental to my game plan thea the judges! During the fight when I was told that I wasn’t winning on anyone’s cards I had to change my game plan.  It was a dogfight.  Canelo never had to box and move that much before in a fight.

“But, live and learn. Instead of walking into a fight like that I listened to those around me. No more surprises. This Charlo fight is a fight I want, a fight my team wants and we’re ready. I’m a more mature, focused champion who’s coming back. I’m dangerous – I have experience, talent and God on my side.”