Badou Jack (24-3-3) trains for perfection, and it shows. On June 6th at Miami’s Hard Rock Stadium, he defeated Dervin Colina (15-1-0) decisively, besting the formerly undefeated Venezuelan with a TKO in the fourth round.

He took the ring ahead of the ultra-hyped exhibition match between superstar Floyd Mayweather and YouTuber Logan Paul. Jack made sure that the fans were not disappointed with the fight card, even though Colina was a late replacement for opponent Jean Pascal, who was dropped from the card.

To prepare for the big night, Jack undertook an intensive training camp that he designed to run eight weeks ahead of the fight date. 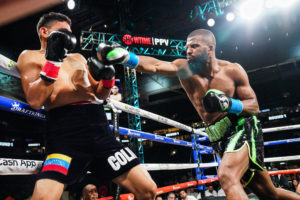 Jack explains his training regimen as follows: “The first week I’m not in the best shape, I pick it up and get better, but I always do pre-camp — I’m always in the gym doing something. Then I start sparring and full hard training. It takes time to get the strategy and everything you’re working on, which is why you have a camp.”

For the June 6th bout, Jack upped his game and extended the rigorous camp schedule after the initial fight date was pushed out. He also upped his preparation this time by adding a holistic nutritionist and chef to his team. Holistic nutrition is a multidimensional approach to personal wellness. It centers around customizing a healthy diet for individuals around their specific needs and lifestyle.

Jack also brought on a new trainer in Johnathon Banks.

“This was my second fight with him as my trainer. The other fight was like a tune-up fight. It was not a high-level fight, only an eight rounder, like a sparring session.”

Jack is referring to his unanimous win against Blake McKernan, which took place in November, 2020 on the MikeTyson vs. Roy Jones Junior undercard, along with Jake Paul vs. Nate Robinson.

Jack and his trainer Banks have developed a close rapport. “My coach is terrific. He’s my age, only a year older, and we have a great chemistry together. We adjusted some things, and everything is working great.”

Before Colina was put on the card, Jack had been training to avenge his close and controversial loss to Pascal in December 2019.

However, Pascal was dropped from the fight card the week before the fight after testing positive for performance enhancing substances. Jack does not pull any punches in sharing what he thinks of Pascal.

“He’s a cheater. This is a life and death sport. Each fighter takes a risk when they step in the ring and he did what he did and his choices have consequences.” 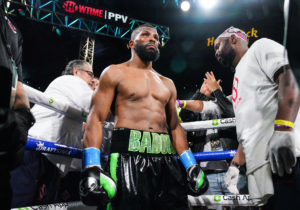 “Hopefully they ban him for life. The first fight we asked for VADA testing but we didn’t get it the first time around, this time we did. We suspected it in the first fight, and he took a beating, so imagine how it would have been the second time around.”

VADA testing is administered by the Voluntary Anti-Doping Association (VADA), a non-profit that promotes clean fighting through random drug testing before scheduled fights.

“Keep boxing clean. Ban fighters long term so they can’t make money, maybe that way it will be taken seriously. There were too many people who lost their lives in the sport, and fighters need to be punished for their actions because we risk our lives.”

Jack was not concerned about the late replacement with Colina, even though Colina won the World Boxing Association’s (WBA) Fedelatin title in the Super Middleweight category last December.

“Nothing changed, I’m a professional, and a real professional has to adapt. I predicted the same outcome, just a different face.”

Going into the fight, Colina had an undefeated record, which Jack ended decisively. In fact, in the four rounds before he got TKO’d, Colina was clearly outmatched and simply looked like he did not want to be in the ring against Jack.

Jack emphasizes the mental and spiritual aspects of fight preparation. “I just believe in myself, believe in my team, listen to my team and stay focused.”

Besides strategizing with his trainer, he focuses on his family and his faith in God. “I pray five times a day. I’m a Muslim and try to do anything I’m supposed to do and put God first, and He will handle everything.”

Not that Jack is serious all of the time. He lives by his ‘90s hip-hop playlist, with Wu-Tang Clan as one of his top go-to artists.

He’s also had some downtime at the gym to connect with the likes of Tyson Fury. Jack says this was just hanging out though, not training time. “I like Tyson Fury and Anthony Joshua. The boxing world is a small world, everybody knows everybody.”

Jack’s advice to his fans? “You’ve got to believe in yourself, work hard, surround yourself with good people and keep winning.”

That’s a formula for success, even perfection, and it’s one he’s taking to the bank. 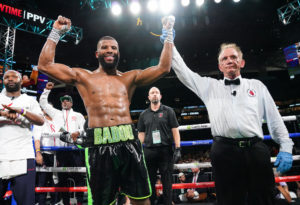