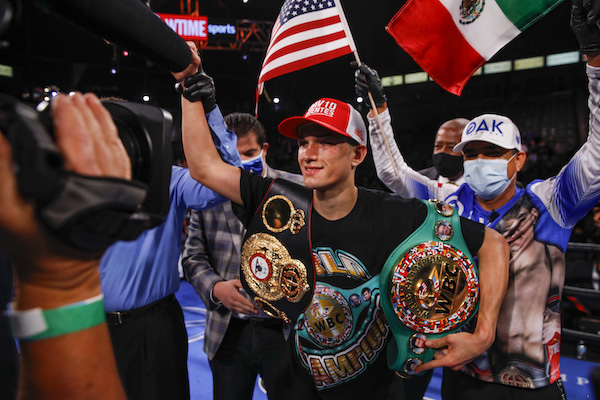 Brandon Figueroa can get used to playing the role of brother’s keeper.

The unbeaten junior featherweight once again provided honor in the family name in the wake of despair following a 7th round knockout of previously unbeaten WBC 122-pound champion Luis Nery. The win took place Saturday night at Dignity Health Sports Park in Carson, California, the same venue that saw Omar Figueroa—Brandon’s older brother—suffer a 6th round knockout loss to Abel Ramos in a welterweight bout just two weeks prior.

“I feel like I always have something to prove, even more since Omar lost a couple of weeks ago,” said Figueroa. “People want to claim the Figueroa brothers are a joke. We’ve heard it all before and I just keep proving people wrong. All it tells me that a lot of people are going to be taken by surprise every time I keep winning.”

Figueroa took many by surprise in a terrific main event, which topped the May 15 Showtime-televised tripleheader as presented by Premier Boxing Champions in association with Mayweather Promotions and TGB Promotions. History should have dictated otherwise, however. The career-best win posted by the 24-year-old Weslaco, Texas native was similar to the pattern that played out two years ago for the Figueroa family.

Omar Figueroa suffered his first career defeat at the time, dropping a 12-round decision to Yordenis Ugas in their July 2019 welterweight title eliminator at MGM Grand Garden Arena in Las Vegas. As much as it hurt Brandon to bear witness to watching his older brother fall well short in the ring, it only provided additional motivation for his next fight. At the time, it was a homecoming headliner which saw Figueroa—just 22 at the time—rise to the occasion in a 4th round knockout of Argentina’s Javier Chacon in August 2019 at Bert Ogden Arena in Edinburg, Texas.

The younger Figueroa has continued to serve as among the best in the 122-pound division, though he knew it was going to take a breakout performance like the one he delivered to convince the masses. That moment came in the 7th round of a furiously paced title fight, which ended when Figueroa landed a left uppercut to the solar plexus of Nery (31-1, 24KOs) who turned away in pain and remained on the canvas for the full ten count.

The win—and the manner in which it was produced—also went a long way to remove the disappointment that came with Omar’s performance earlier in the month.
“We’ve been doing this basically since we were babies,” notes Figueroa. “We both came a long way. We’re warriors and fight to the end. Win, lose or draw we support each other to the end.

“Obviously, we both hate losing. You train your ass off and go into the ring believing there’s no way you can lose. That hasn’t changed for me at all. I’m out here to prove that Team Figueroa is still for real and here to dominate the sport. It’s just my turn to carry the name. I’ve always been there for Omar and I know he’s going to be there for me.”

With the win, Figueroa (22-0-1, 17KOs) claims the WBC junior featherweight championship in addition to the WBA “World” title he has held since 2019. Next up is a title unification showdown with Philadelphia’s Stephen Fulton (19-0, 8KOs), who puts his WBO champion on the line September 11 on Showtime.

Figueroa will once again enter a big fight as the underdog, both with oddsmakers and in the view of the general public. For his family, that is just something that has always come with the territory.

“For my legacy, to beat someone like Nery should go a long way to show that I’m for real,” believes Figueroa. “As for proving myself to people in this sport, I prove myself every day in the gym, every day in the ring. My accomplishments speak for itself.

“The ones who support me will be there to the end. My family has been there for me since day one and will always have my back. I’m used to being underestimating by other fighters and even by fans of the sport. I just like to go to work and let my actions in the ring tell the story.”