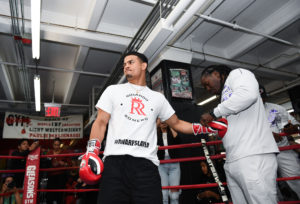 Bullet Cromwell, Rolando Romer’s trainer, predicts an upset at the upcoming Davis v. Romero fight at Barclay Center in Brooklyn on May 28th.

But Cromwell isn’t having any of that. Romero is the number one contender in the rankings in this weight class under Davis.

“I believe in my fighter and that he believes in himself, and it’s our turn to get the crown.”

“People can say what they want about the skillset, and I love it.”

“When you have a fighter as competitive and strong-minded of will as Rolly, it’s murder, murder murder, kill, kill, kill, that’s the mindset of a fighter. It’s the intangible of the sport.”

“If your mindset is to go in there and box, it’s a long, boring, twelve-round fight that nobody wants to see.”

“We’re not trying to outscore nobody – we’re trying to destroy you.”

For that matter, Cromwell doesn’t think much of Davis’ boxing skills.

“Gervonta lacks a lot of skills. The majority of his fights he’s usually down, and those are guys who can’t punch as superbly as Rolando Romero.”

Cromwell sees some weaknesses in Davis and thinks his trainer Calvin Ford is going to be making some adjustments to face Romero.

“Tank fights on instinct. He loops and opens up, and that’s where he’s going to get in trouble.”

Cromwell believes that Tank’s trainer, Calvin Ford, will have to make adjustments in this match-up.

“We’re going to see another side of Tank if he’s smart. If he wants to fight, then thank you, Merry Christmas to us!”

“But I think they will try to maneuver and download his information, you know, be a 12-round fighter. I expect them to do what they’ve got to do to survive.”

Cromwell believes that Romero is more than ready for this fight, even if it’s his first time headlining a PPV event.

“The amount of fights and all that, first time, it doesn’t matter. There’s a first time for everything. It’s going to be the first time to see Tank get knocked out!”

Cromwell also says Romero has the mentality of a true superstar.

“It’s just the mindset. When you believe in yourself, then other people start believing in you.”

“We have all the tools to be a dominant force in boxing at 135 division, and him being the personality he is, it only adds to what is needed in the sport.”

“Rolly is a superstar personality, a superstar boxer, and he’s a major fighter. At the end of the day it’s a puzzle that’s come together and he’s ready.”

Cromwell believes that Romero’s punching power and killer instinct can overcome whatever deficits he has in terms of boxing skills. Who do you think will end up on the canvas?