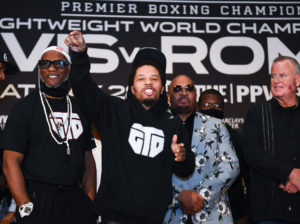 As Tank Davis Defends His WBA Lightweight Title on May 28th

And Ford wants not just a victory for Davis, but a punishment for Romero.

“This fight I want punishment. I want real punishment. I can get you from one to twelve. Beat him up and let him survive when he’s ready to fall. I want him to remember.”

Romero has been doing a lot of trash talking, in the build-up to the fight and on social media.

“Rolly is doing his job, trying to see if he can push any buttons with Tank. Rolly is trying to aggravate and get under Tank’s skin.”

“Tank has reached another level. Tank stays calm and doesn’t feed into it.”

Instead, Ford says that in spite of all his bravado, Romero sounds like he’s in over his head.

“You can hear it in Rollly’s voice. Rolly wasn’t confident standing up there.”

Now Ford is looking to settle the score in the ring.

“He’s talking a good game, but we don’t talk, we always do it in the ring. There’s going to be some fireworks.”

Ford isn’t worried about getting a knockout.

“I don’t train for knock-outs. I can get you from one to twelve. We’re definitely going to be ready. We want Tank to keep calm and keep his focus.”

Still, Ford admits there’s some real animosity that will come to a head in the ring.

“These two guys have been going at it for years. It ain’t about the 0 this time, it’s about respect.”

The fight is a title defense for Davis as mandated by the WBA. Romero was interim WBA champion until the WBA eliminated interim and extra titles in order to consolidate the number of championship belts it awards as part of its world title championship reduction plan.

Davis won the WBA Lightweight title in December 2019 when he defeated Yuriorkis Gamboa in Atlanta. Davis then defended it in October 2020 when he knocked out Leo Santa Cruz in San Antonio.

Will this fight go the distance as a twelve-round punishment, or will it end in a knockout? Will Tank keep his cool or will Rolly get under his skin on fight night?