all into this sport.” 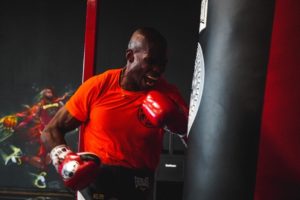 HOUSTON – (May 26, 2021) – Former NFL star wide receiver Chad Johnson made a name for himself throughout his storied career by combining elite on-field production with highlight-reel celebrations and an outspokenness that made him a household name. Now, he will look to take that same formula into his boxing debut when he steps into the ring for an exhibition against versatile fighter Brian Maxwell on Sunday, June 6 as part of the Mayweather vs. Paul SHOWTIME PPV event at Hard Rock Stadium in Miami Gardens.

In addition to bringing his brand of entertainment to the event, Johnson compared his own boxing style to one of the sport’s most unique fighters.

“I’m transitioning that flair you saw from me on the football field all into this sport,” said Johnson. “To me, my style is like Emanuel Augustus. Once I got those basic fundamentals down to a tee, I could add that trickery to my game.”

A long-time fan and student of the sweet science, Johnson never believed that he’d have this opportunity to box on this stage. However, once he received word from Mayweather and knew how long he’d have to prepare, he jumped on the chance presented.

“I never thought about stepping in the ring,” said Johnson. “I never thought there would be an opportunity to do so. But I love boxing. I’m friends with every boxer out there because I love and study all of it. I didn’t expect anything like this to happen. When Floyd called, the first thing I wanted to know, was how much time I had to prepare. Once I knew that I had enough time that I could look like myself in there, I knew I could pull it off.”

Always pushing the boundaries of what the public expects from athletes, Johnson will add another feather into what has been a remarkable career as an athlete and entertainer with this fight on June 6.

“This is a one-time thing,” said Johnson. “I’ve done some crazy things in life, and this is one to add and scratch off the bucket list. I’m coming in there to have fun and entertain.”

ABOUT MAYWEATHER VS. LOGAN PAUL

Mayweather vs. Logan Paul is a special exhibition bout presented by Mayweather Promotions, FANMIO and Mavathltcs that will take place on Sunday, June 6 at Hard Rock Stadium in Miami Gardens, Fla. The telecast, which is being produced by SHOWTIME PPV, will air live beginning at 8 p.m. ET/5 p.m. PT and can be purchased now at SHOWTIME.com and FANMIO.com. The undercard will feature WBA Light Heavyweight Champion Jean Pascal vs. two-division world champion Badou Jack in a 12-round rematch, plus former unified super welterweight champion “Swift” Jarrett Hurd against Luis Arias in a 10-round bout and in a fourth PPV bout, former NFL star wide receiver Chad Johnson will make his boxing debut in an exhibition match against versatile fighter Brian Maxwell. Tickets are on sale now at Ticketmaster.com.