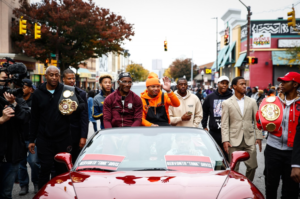 Thousands of fans lined the one-mile stretch from Preston Street to the Upton Boxing Center, where Davis first learned to box when he was just five years old under the tutelage of trainer Calvin Ford.  Following the parade, at a fan fest across the street from the Upton Boxing Center, Mayor Young thanked Davis and Ford for their positive contributions to the city.

“We thank you for all you do,” Mayor Young said.  “The city loves you and appreciates you. I would like to take this moment to commemorate Tank and his accomplishments with a new accomplishment, today is officially Tank Davis Day in the City of Baltimore.”

The 24-year-old Davis became the first Baltimore native in nearly 80 years to make a hometown title defense this past July before a sold-out crowd at Royal Farms Arena.

“I grew up in the gym here in Baltimore,” Davis said.  “It feels great to be so close to the people here. I love you all. We’re stronger together.  I always imagined I’d be in this position but I never imagined the amount of support and love you all have shown me.  I’m just thankful.”

In his next fight, the undefeated former two-time super featherweight champion will seek to conquer another division when he faces Yuriorkis Gamboa for the WBA Lightweight Title on December 28 live on SHOWTIME from State Farm Arena in Atlanta.

Ford, who has trained youth at Upton Boxing Center since the late 1990s, was proud that his star pupil can be a positive influence for all the inner city youth in the Charm City.

“At the press conference when we first brought the (July 27) fight here I asked y’all to stand up and that’s exactly what you all did,” Ford said.  “This city is a beautiful city. The only thing I ask you to do is to take care of this city. Take care of your block. Our kids are our future. I am a product of this city.

“To all of you who have a vision, chase that. Chase those visions. The support we receive is beautiful. I love each and every one of y’all. Thank you to everyone who came out and stood up for our hometown champ.

“We will be back and we know you will be behind us.”