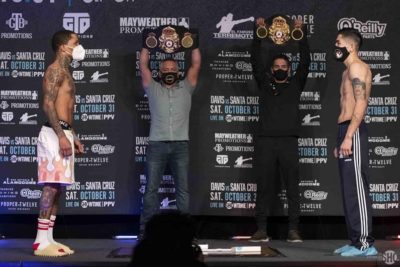 *Prograis failed to make weight at the 140-pound limit and the fighters have agreed to fight at a higher weight.

The executive producer of the SHOWTIME PPV telecast is four-time Emmy award winner David Dinkins, Jr. The director is Bob Dunphy, son of legendary Hall of Famer Don Dunphy. The pair has been guiding SHOWTIME Sports’ flagship series SHOWTIME CHAMPIONSHIP BOXING® since its inception in 1986 and has produced the three highest-grossing pay-per-view events of all time (Mayweather-Pacquiao, Mayweather-McGregor, Mayweather-Canelo).

ABOUT DAVIS VS. SANTA CRUZ

The event is promoted by Mayweather Promotions, TGB Promotions, GTD Promotions and Santa Cruz Boxing Club. Tickets are on sale now and can be purchased at Ticketmaster.com. The Alamodome has implemented a comprehensive health and safety plan to protect against the spread of the coronavirus. All fans attending the event will be screened upon entry and are required to wear a mask as well as follow social distancing guidelines. Tickets will be distributed in seat blocks known as “pods” to maintain distance between groups not from the same party. For more information, visit Alamodome.com.