Mayweather Promotions proudly presents its 8th Titans of the Trade: Breakfast of Champions—Dream, Conquer, & Sparkle affair!  Hours before the highly anticipated Mayweather vs. McGregor weigh-in, we will bring together a distinct group of influencers that have and continue to impact the sports and entertainment world. During this remarkable occasion, we honor those who exhibit excellence through inspiring others to dream big and seek continued progress and opportunities.

This event’s theme will be: Dream, Conquer & Sparkle; and will focus on recognizing those who have shined or sparkled in their respective fields. Everyone has dreams and milestones to conquer and these individuals bring a sparkle to the world of sports and entertainment. Sparkle is their brilliance, liveliness, or vivacity that has made a difference. The ability to shine bright and make a stance known within the industry is noteworthy.

Our mission is to inspire, support, connect, and build a strong community of professionals who aspire to impact the sports and entertainment industry. The achievements of the esteemed professionals highlighted during the event demonstrates that the industry is connecting, growing, and diversifying.

This is an excellent opportunity to meet a variety of influential and formidable trailblazers in the sports industry, be inspired by their accomplishments and words of wisdom, while also networking amongst an elite group of individuals. All are welcome to attend this great celebration in recognition of those who are blazing trails for others!

Young Trailblazer Award recipient- Tally is an up and coming multi-talented rap artist, songwriter, actress and musician from sunny Nashville, Tennessee.  Growing up, Tally took interest into becoming an artist when she began making YouTube covers, landed lead roles in her school plays, and starting playing the guitar, which helped her songwriting skills. Music always played an important role in her life and that landed her a star role in the second season of Lifetime’s The Rap Game. After being eliminated after the first episode, she didn’t let that deter her future success. She continued to focus on her music career, ultimately landed her another opportunity on the third season of The Rap Game, as well as performing at the 2017 Radio Disney Awards.

Young Trailblazer Award recipient- Simone DeCoud has made headlines due to her continuous success as a point guard at UC-Riverside. This Riverside native has been a three-time, All-Big West Honoree, who has averaged 11.5 points, 5.9 rebounds, and 3.1 assists per game this season.  Simone has finished her junior year in college as the team’s seventh all-time leading scorer and second on the career assists list and expects to graduate with a degree in Media Cultural Studies. After graduating, she will look to begin her professional basketball career overseas.

Golden Glove Award recipient- Heather “The Heat” Hardy has let her talent do all the talking. She has contributed to diversifying the sports industry by her remarkable success as a female boxer and strength through her continuous achievements in the industry. Being a single mother and a professional boxer has come with a lot of hard-work and dedication but Heather has conquered her adversities through recognition in combat-sports. Her most recent achievement was her TKO win at her MMA debut against Alice Yauger on June 24th. Heather is also unbeaten in the boxing ring with 20 wins, 4 KO’s and the WBC super bantamweight & featherweight world titles.

Titans of the Trade Award recipient- Shan McDonald was inducted into the UNLV Athletics Hall of Fame after leading the Rebels to 511 victories in 17 seasons, seven-straight NCAA tournaments from 1990-96, and three appearances in the Women’s College World Series. The former UNLV softball coach  drove her team to break, or tie, 30 school records, which helped earn her the ‘all-time winnings coach’s title. She has proven to be a true titan  in sports.

Meritorious Achievement Award recipient- Sparkle Lee has lead a reputable career as a boxing referee that has helped reshape the image of the ‘third man in the ring’ for all women. She has made history on countless occasions including as the first female referee to be inducted in the International Boxing Hall of Fame. Her love for boxing started as a routine workout at Gleason’s Gym in the 80’s and transpired into a career of 30+ years, paving the way for female referees to follow.

In addition to our honorees, the event will be hosted by, TV personality and fashion designer; Angel Brinks. Plus 2 special guest performances by talented Las Vegas native; Cabria Anderson and singer and songwriter, Jade Novah.

PURCHASE YOUR SEAT TO THE BIGGEST EVENT BEFORE MAYWEATHER VS. McGREGOR TODAY! 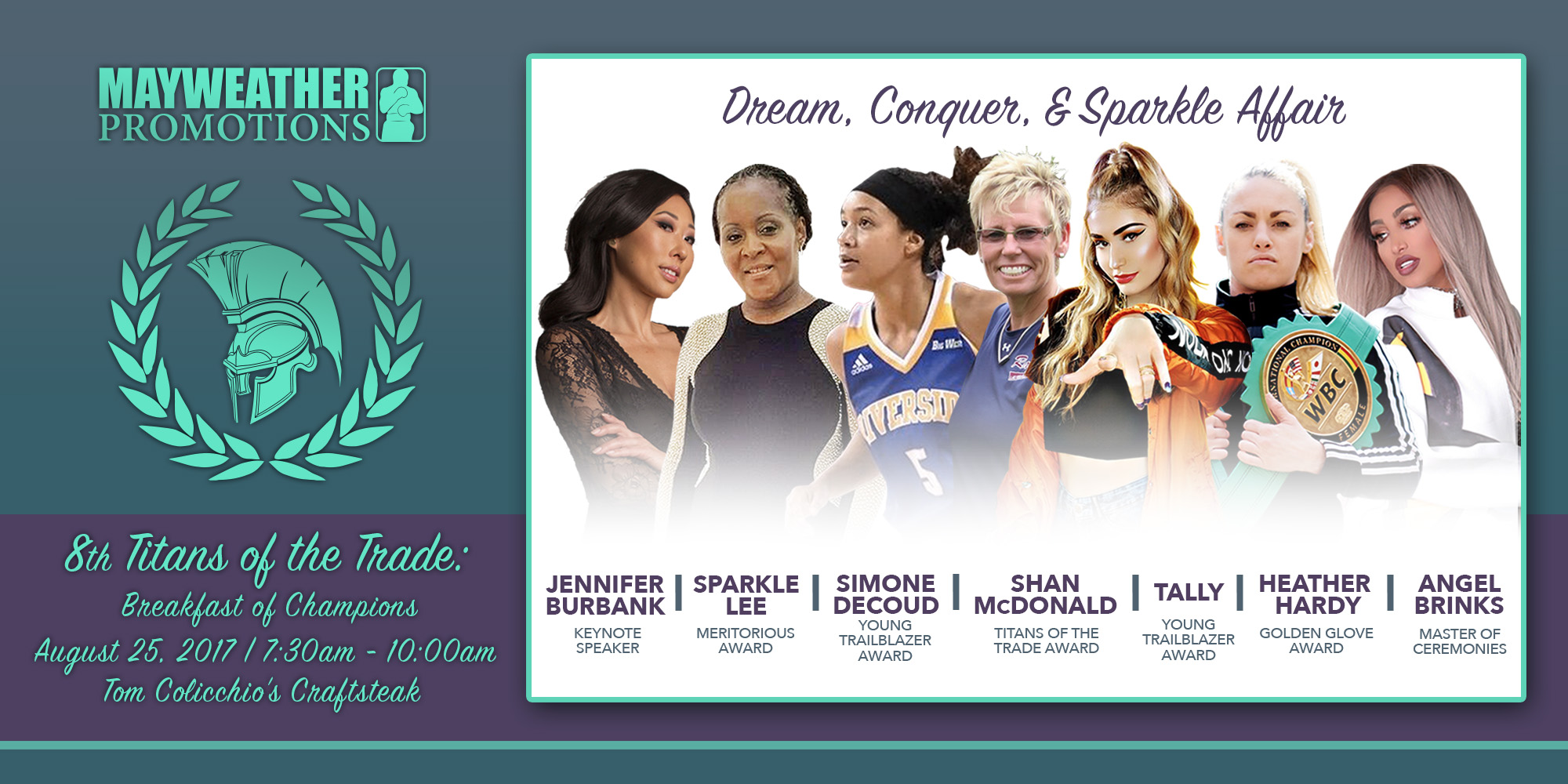