Live On SHOWTIME® From State Farm Arena In Atlanta 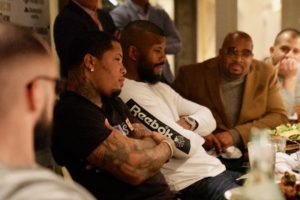 WHAT: Gervonta Davis and Badou Jack met with members of the media last Saturday in Las Vegas to discuss their upcoming matchups taking place Saturday, December 28 live on SHOWTIME at the award-winning State Farm Arena in Atlanta in a special year-end Premier Boxing Champions event.

Tickets for the event, which is promoted by Mayweather Promotions, GTD Promotions and TGB Promotions, are available through Ticketmaster.com.

Here’s what the fighters and executives had to say:

Thoughts about Gamboa and moving up in weight:

“We know Gamboa is a veteran and that he’s had a lot of wars, so we know we have a tough fight. He’s definitely dangerous. He can hit. He can fight.

“His last fight he made 134, so we know he can get bigger than me at that weight. I’m going into this knowing he’s a bigger fighter than me. I’m just going to bring my power and capitalize on that weight class and becoming world champion.

“I believe I’m one of the top fighters in the world, but I don’t compare myself to other fighters. I just go out and get the job done.

“Atlanta is my second home. I’m confident I’ll sell it out.”

On his ability and uniqueness as a fighter:

“I come from a different cloth than these other guys. I’ve been through everything in my life. A lot of people haven’t experienced what I have. If I ever get beat it would have to be by someone who’s been through what I have been through. It can’t be anyone who’s just been training all their life.

“Every time I step in the ring I’m willing to leave it all in there. A lot of people haven’t seen my full skills because I haven’t fought an opponent that has brought them out.”

On his potential in the sport:

“The boxing world hasn’t seen my true potential as a fighter, they’ve just seen my power. I’m the type of boxer where if you don’t belong in there with me, you won’t be in there too long. Some fighters like to take their time. I’m the type, if I know you’re not on my level, I’m going to show it. The world will see. I’ll fight anybody.”

On his upcoming matchup against Pascal:

“I’m excited for this fight. I actually called Pascal the day before his last fight and let him know I was rooting for him. But this is business at the end of the day. I’m coming to take back my title.”

On how he feels at this age:

“I feel like a young 36 years old. I live a clean life. I’m always in the gym training and I try not to take any punishment. I have a couple of years left and I’m more motivated now than ever. I needed that little break. I hadn’t had a break since I was an amateur twenty years ago. I took time to relax with the family and eat good food. Now I’m hungry.”

On his last performance against Marcus Browne:

“Everyone who saw me in my last fight could see I was flat. My fighting instinct kicked in at that point. He was fighting a dead man.”

On the Davis vs. Gamboa matchup:

“It’s a great fight. Gamboa is a little older, but he looked good in his last fight. I’m a big, big fan of Tank – the way he fights, his speed, his athleticism, everything. He has star power. He was on my undercard, now I’m on his. He’s going to bring great things to the sport and as long as he stays focused, he’s going to be a superstar.  He’s already a superstar.”

On Davis’ position and progression in the sport:

“We’re going to show everyone how he’s going to become the biggest star in the sport. In 2020 we’re going to blow this out of the water.  We’ve been able to think outside the box.  That’s how you grow the sport.  We’ve made a concerted effort to cross him over to the mainstream; working with the Baltimore Ravens, his parade, now Atlanta.

“Our plan is to make the biggest and best fights out there. We’re going to call the shots and it’s going to be on our terms, and we’ll let everyone know when that happens. Everyone wants to fight Tank. There’s one common thing when you talk about 126, 130, 135, and now 140. There’s one name that’s common among the fighters and that’s Tank. This is going to be a great journey and you better get on it now.

“If he can get past Gamboa on December 28, then in 2020 he’s going into that pay-per-view world. When you have that kind of star power and you’re thinking outside of the box, not just boxing fans, we’re going to make the biggest fights out there in the world.”

“Badou’s a promoter’s dream. He’s a guy who gives you no problems. He’s out there doing wonderful things for himself and his family. He’s doing so much to help so many others. He’s using his platform in the right way. It’s an honor to work with a fighter like him.

“I always knew he was a great talent and sometimes you can find the diamonds in the rough. Everyone’s always looking at the guys coming out of the Olympics. We saw him in the gym and he really messed a guy up. We had an eye on him and we worked out a deal with Lou [DiBella] and the rest is history.

“There are advantages and disadvantages to promoting a show on this date. There has been a lot of success promoting music shows on that weekend. It’s not apples to apples, but it’s one of the factors that went in and there’s a way to turn this into something special and unique because of Gervonta’s fan base.

“It’s great to have skilled boxers but we need, for the health of the sport, guys like Gervonta who are putting butts in the seats. That’s the key in bringing him to Atlanta. Boxing is a part of a culture that crosses over into music and sports. There’s not an athlete who doesn’t watch a pay-per-view boxing match. Tapping into that with a personality like Tank is only going to expand the sport.

“There’s an authenticity and an openness about Gervonta. There’s a lot of people who’ve had setbacks who don’t talk about it, like Tank. It takes a risk to talk about that and that’s why a lot of people can relate. This is Tank. What you see is what you get. It’s very real. It’s very authentic and I think that’s why people connect with him the person as opposed to him the fighter.”