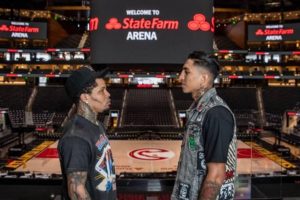 Gervonta ‘Tank’ Davis has plenty of time to put on his game face.

The unbeaten two-time junior lightweight champion didn’t yet feel the need to bring that level of bravado to Atlanta’s State Farm Arena, where he was on hand Thursday afternoon to announce his next fight. Davis will move up two weight divisions to challenge reigning WBA “World” junior welterweight titlist Mario Barrios, in a bout that will headline a June 26 Showtime Pay-Per-View event.

“I want to be great,” Davis explained of his rationale to take on the unbeaten 5’10” Barrios for his first career fight above he lightweight limit. “Everybody at 135, they had scheduled fights and things like that.

“I figured, to be the best, you have to beat the best. Here we are.”

The quest for in-ring supremacy is of no surprise to his team, though still music to everyone’s ears.

“He’s going to fight at 140 pounds for this fight right here. If he’s successful, again he’s the guy in the division. He’s the cash cow. That’s what happens when you surround yourself by the right team and think outside the box. He’s the attraction. He goes out there to destroy you.”

Few in the sport have taken out the competition in more emphatic fashion than the 26-year-old Davis (24-0, 23KOs), who has stopped his last 15 opponents. The most recent example of the potent punching power he possesses came last Halloween, when the Baltimore-bred southpaw wrapped up his debut as a PPV headliner with a highlight reel 6th round knockout of four-division champion Leo Santa Cruz. Davis waded through three straight right hands to fire off a left uppercut which left Santa Cruz flat on his back.

Video footage of the fight has generated more than 7,000,000 views across the YouTube channels of Showtime Sports, Premier Boxing Champions and Mayweather Promotions.

Davis has brought out the stars even dating back to his first career title fight, which came on the undercard of a Showtime telecast in January 2017.

The merciless knockout artist—guided by celebrated trainer Calvin Ford, who has trained Davis since his first day in Upton Boxing Gym some 20 years ago—handed Jose Pedraza his first career defeat on that night, stopping the unbeaten Puerto Rican in the 7th round to win the IBF 130-pound title. A sizeable portion of his fan base made the trip to Brooklyn’s Barclays Center, where Davis returned more than a year later to claim the WBA “Super” junior lightweight title following a 2nd round knockout of Jesus Cuellar in April 2018.

The bout was Davis’ last as an undercard attraction, enjoying three straight Showtime-televised main events in 2019. Davis didn’t at all disappointing, delivering at the box-office, in the ratings and—most importantly—in the ring. Nearly 37,000 fans packed venues in three different cities across the U.S., including a long overdue Baltimore homecoming which saw Davis bring home the city’s first world title fight in nearly 80 years.

Social distancing measures limited ticket sales for Davis’ win over Santa Cruz. The event pulled a crowd of roughly 9,000, marking the first U.S. televised boxing event to boast fans in attendance since the pandemic. The world continues to battle the infectious disease, though making enough progress to where large gatherings are once again becoming the norm rather than an anomaly.

It comes right on time for the latest entry in Davis’ rise to superstardom. However, the occasion required the right opponent and the right amount of risk.

Boxing fans clamored for fights with fellow lightweight guns Devin Haney, Ryan Garcia and Teoflmo Lopez. All three ultimately wound up with other plans—Haney and Lopez in separate title defenses, Garcia getting his house in order before making his way back into the ring.

Meanwhile, Davis needed to move forward. The quest for greatness couldn’t just come through talking on social media, though he certainly boasts the platform with more than 2,700,000 followers on Instagram. That next step had to come in the ring, no matter the risk. That risk comes against an opponent who boasts advantages of more than four inches in height, three inches in reach and who has been actively campaigning at junior welterweight for more than four years.

“It comes with the game. It’s what we do,” confidently stated Davis, who has regularly boxed since age seven. “It’s boxing. If he comes in heavy, I come in small, it really doesn’t matter. My goal is to break him down. If I can get him out of there, I’ll get him out of there. If it goes 12, then so be it. We know he’s big, he’s strong.

“I’m giving up height and reach, plus he already fights at 140. I don’t fight at 140. I’m naturally the smaller guy. He’s never faced nobody like me, though.”

It’s proven true every time he’s stepped in the ring thus far, including his 100% knockout-to-win mark heading into his ninth career title fight.

“We just keep moving forward with Tank’s career and keep looking to making these biggest fights out there,” vows Ellerbe. “He’s going to show that he’s the biggest draw in three weight divisions. He will continue to fight the biggest fights possible. Tank is a true Pay-Per-View attraction from here on out. There’s no turning back.”