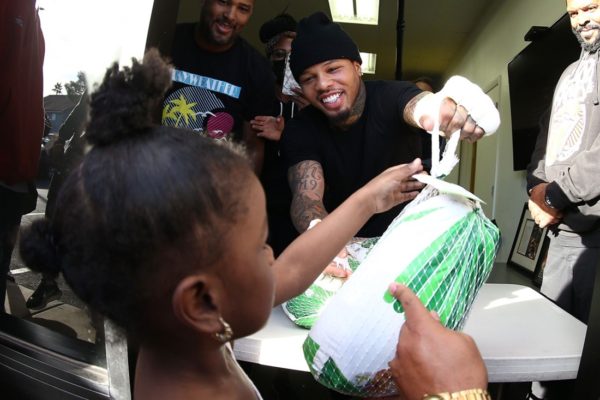 Five-Time World Champion Davis Gives Back Ahead of Thanksgiving Holiday Handing Out Turkeys, Gift Cards and More for

Tickets for the event, which is promoted by Mayweather Promotions, GTD Promotions and TGB Promotions, are on sale now and can be purchased at AXS.com.

Here is what Davis, his trainer Calvin Ford, and Mayweather Promotions CEO Leonard Ellerbe had to say Tuesday from Mayweather Boxing Club:

“I really didn’t have a family that was together to celebrate Thanksgiving when I was young, but now I have my two little daughters, so I’m definitely looking forward to the holidays. I’m going to miss Thanksgiving because of the fight, but Christmas is going to be big this year.

“It’s always great to be able to help out. I was always looking for someone to help me when I was a kid, so to be in a position to help others now really means a lot.

“This is going to be an exciting fight. Cruz comes to fight each and every time. I’m just waiting to see what he brings to the table on December 5, and we’ll capitalize off of his mistakes.

“Cruz coming forward could make the fight a lot easier for me, but there are definitely challenges with that style too. He comes forward with his head a lot. I’m definitely going to be ready for that.

“The change in opponent didn’t really affect my mindset or my game plan. Trash talking doesn’t matter to me anyway. We all have to get out there and perform when it’s time to.

“Anything that he does dirty in there, I’ll be ready for. He better be prepared, because whatever he dishes out, I’m going to give it right back to him.

“He’s an explosive fighter. We have to see what he brings on December 5. I’m looking forward to it. I want to give the fans another action-packed fight.

“Fighting at STAPLES Center is big. I’m happy to be in this position to be able to go out there and put on a great performance. I’m just a kid from Baltimore city who’s trying to make something out of boxing, and we’re here now headlining at STAPLES Center. I’m definitely using that motivation to my advantage.”

“’Tank’ has always put the effort in. He’s just different. He loves the work and he’s always evolving. There are three elements to ‘Tank:’ the fighter, the family man and the business man. I’m just trying to help guide him the best I can.

“We’re looking forward to this fight. It’s not our first time having an opponent switched. Cruz doesn’t say too much, but he’s very dangerous. He has something to prove to the world.

“Sometimes style makes fights. So many people are calling ‘Tank’ out that he’s always preparing for all kinds of styles. Cruz is dangerous and everyone is sleeping on him. We know that he’s coming.

“The people love ‘Tank’ because he puts on a good performance. People forget that boxing is about entertainment. If you listen to any of his interviews, you can tell that’s what he really cares about, being exciting for the fans.”

“Gervonta is extremely grateful to be in a position to help so many people. He’s humbled by how the fans have gravitated to him and he wants to be able to give back to those less fortunate. You have to be forever grateful to be in that position.

“This is a very dangerous fight for Gervonta. This is Isaac Cruz’s Super Bowl. He’s looking to upset the apple cart. I know he’s had a terrific camp and I hear he’s been knocking out sparring partners, but I’d tell Cruz that his sparring partners are not ‘Tank’ Davis.

“This is going to be an explosive fight. I think Cruz will bring out the best of Gervonta. We’re going to see his boxing skills in this fight. Gervonta is must-see T.V. and he knows that Cruz is coming for him.

“’Tank’ has built himself into an attraction because he gives the fans exactly what they want to see; and that’s excitement from start to finish.”

ABOUT DAVIS VS. CRUZ