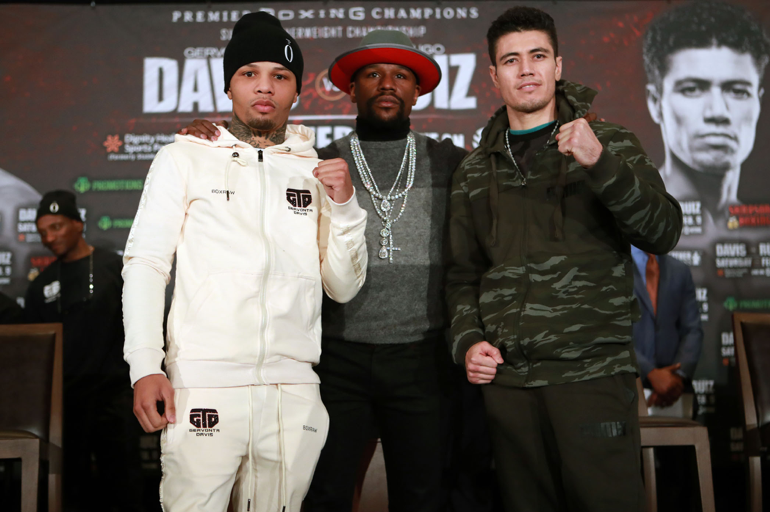 Also facing off on Thursday were fighters who will enter the ring live on SHOWTIME in televised undercard attractions. Undefeated super lightweight Mario Barrios will be facing Mexico’s Richard Zamora, while former world champion Javier Fortuna will step in against lightweight contender Sharif Bogere as part of live SHOWTIME action kicking off at 10 p.m. ET/7 p.m. PT.

The event is promoted by Mayweather Promotions, TGB Promotions and Sampson Boxing and tickets are sale now and can be purchased at AXS.com.

Davis was joined on-stage by his promoter, legendary boxer and Mayweather Promotions President Floyd Mayweather. Here is what the press conference participants had to say Thursday at the Westin Los Angeles Airport before Saturday night’s event:

“I’m so excited to come back strong in 2019. This is the year that could put me over the top and put me at the highest level.

“The opponent change didn’t really affect me. In the amateurs we fought four or five times a week so we always had different opponents. I had been sparring someone taller than me in training camp anyway. I think a fighter should be ready and able to adapt to anything that is in front of him in the ring. I’m ready and I hope Ruiz is too.

“Training camp has been great. I’m ready for Saturday night. We planned on fighting Abner Mares, but he had an injury and we hope to still get him down the line if everything is okay with his health.

“Hugo Ruiz is a great opponent. He’s going to come to fight on Saturday night. He’s been telling the media he’s going to knock me out, so I hope we get an action packed fight for the fans. I’m glad Ruiz is coming for the knockout. We owe it to the fans and I’m praying that he comes ready to give them a great show.

“Ifeel like I’m the fighter that can be the next big star. I’m working towards it. I’m just a kid soaking it all in right now. Saturday night, I hope everyone is ready, because it’s going to be action.

“Ruiz’s record speaks for itself. I’ve watched him and he has some pop. He’s accurate and I’m ready for it. I don’t think I’ll have any ring rust. I’ve worked with a lot of great fighters in the gym. I’m just excited to get back in the ring.

“I want to give my fans all over the world a great show. Everyone tuning in is going to see a great performance. Hopefully Hugo will live up to his word, because I’m going to live up to mine.”

“I’m very happy to have this opportunity. I’m going to leave everything in the ring. I have a lot of faith in my boxing skills. I trust and believe that there is going to be a new world champion on Saturday night.

“I’m in rhythm and in shape. I’ve been very active leading into and since my last fight. Davis is a tremendous champion, but he doesn’t intimidate me. I’ll be ready for him come Saturday night.

“Davis is a strong champion and I know this is a big opportunity for me to fight someone of his caliber. I’m ready mentally and physically for the greatest opportunity that has been given to me.

“At 130-pounds I feel more power than ever and I will demonstrate that on Saturday night. This is a big challenge for me. This is the opportunity that I’ve been waiting for throughout my 12-year career. I don’t plan on wasting it.”

“This is a huge opportunity and I’m very excited for it. I’m looking forward to going out there and putting on a great show for the boxing fans.

“I’m ready and I’m prepared to take full advantage of this chance to make a statement on Saturday night. I want any one of the champions in this division, but I’m not looking past Zamora. I just know that the work that I put in will pay off.

“I have big things on the horizon and Zamora is in my way. I’m focused and ready to make this a great night. If he wants a war, I’ll give him a war.”

“I’m very happy and thankful to be in this fight. This is the opportunity I’ve been looking for. I’m ready to compete and I’m not going to let this opportunity pass me by.

“This is definitely a big step for me in my U.S. debut. If I can get a win over Mario Barrios, then I would be able to reach a lot of dreams that I have.

“I come well prepared and I’m expecting a war. I’m going to be ready to go and battle until the end. You’ll see that I’m going to leave it all in the ring.”

“I’m going to give the best that I have in the ring. I’m going against a good boxer with a good record, but it doesn’t matter what obstacles are in front of me. I’m going to come through with a big win on Saturday night.

“We have a new team and a new trainer that is going to give the fans the best Javier Fortuna possible on Saturday.

“A victory against Sharif Bogere is very important for me and a stepping stone to where I want to get. It’s going to be a difficult fight, but I’m ready to make this a very tough night for him.”

“We are going to make this a great fight on Saturday. Fortuna is a good fighter and tough guy. I expect him to bring a lot of fireworks. I’m prepared for it and I have the game plan to win.

“Every day is a tough test in life. This is going to be just another fight. I’m prepared and I have a great team behind me. I’m coming on Saturday night for what belongs to me.

“Fortuna has a big name and is a step up for me. This win will put me up there toward the top and I’ll be prepared for whatever challenge comes after that.”

“It’s great to be here with so many young talented fighters. I could remember 23 years ago when I was in that same position. When you’re in this position you have to take advantage of it. Opportunities like this come once in a lifetime. You must go out there and give it your all.

“I want to see these fighters become great and become stars. The records that I’ve set were made to be broken.

“I remember when Gervonta Davis first came to my gym. He worked hard and believed in himself. Sometimes we did two-a-days. I f we didn’t think the job was done right, we’d come back and correct it. We continue to strive every day to be the best we possibly can be. Gervonta works extremely hard, but he can’t take anything for granted in this fight.

“I think Hugo Ruiz is more dangerous opponent than Abner Mares. Abner is a tremendous fighter, but Ruiz is very tough and he has good knockout power.  This is a great matchup and the kind that people want to see. It’s all about putting on great shows and Saturday will be another blockbuster.”

“We have a great event this Saturday night with great fights from top to bottom of this card. This is going to be a great night of boxing.

“Gervonta Davis has reached goals beyond just the boxing ring. I know the impact that Gervonta has on the youth all around the world. When it comes to excitement, explosiveness and knockout power, this is something new that the fans are getting a chance to witness.

“At the young age of 24, fans have come to know Gervonta for his punching power. But he’s also a very skilled boxer. This is one of the things that he’ll be able to showcase moving forward in a number of big fights he’s going to have.

“We know he has a tough challenge in front of him. Anytime you have a last minute replacement who’s an excellent fighter, it’s a big challenge. Ruiz is an aggressive fighter and we expect nothing but a great fight.

“Gervonta Davis has the full arsenal. In my opinion, he’s the most exciting fighter and the biggest puncher in the entire sport. It takes more than knockout power and I think you’ll see an array of his skillset.”

“It really is an honor for me to be involved in this great show. These are going to be three great fights. Hugo Ruiz had been training for a southpaw before an opponent switch led to him fighting a right hander last fight. After a few more weeks leading into this fight, Ruiz is 100 percent ready for this challenge.

“Trust me, this is going to be a rough fight. I believe that Davis will have his hands full with Hugo Ruiz. Ruiz comes from a family of fighters and he is a true Mexican warrior who will leave it all in the ring on Saturday.”

ABOUT DAVIS VS. RUIZ