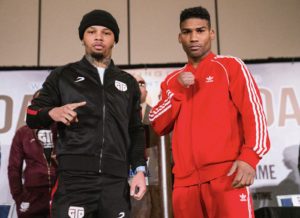 The press conference also featured WBA Light Heavyweight Champion Jean Pascal and two-division champion Badou Jack, who will square off in the co-main event, and former champion Jose Uzcategui and Lionell Thompson, who battle in the opener of the SHOWTIME CHAMPIONSHIP BOXING telecast beginning at 9 p.m. ET/6 p.m. PT.

Tickets for the event, which is promoted by Mayweather Promotions, GTD Promotions and TGB Promotions, are on sale and available through Ticketmaster.com. Good tickets are still available. All tickets start at $54 and $104.

Here is what the press conference participants had to say Thursday from the Sheraton Atlanta Hotel:

“Training camp has been great. I’ve been training with my brothers and sister on the undercard. Saturday night we’re going to make history again. There hasn’t been a title fight in over 20 years and I’m excited to be in this position to open doors for others and myself.

“This is my first time fighting in Atlanta. I’ve been coming here for over four or five years and I’ve been wanting to fight here. Atlanta always shows me love and I always thought that me fighting here would be big. I knew I had a big fan base here.

“Saturday night we’re going to have a big fight. Thank you to Gamboa for taking the chance. Saturday night it’s going to be an action-packed fight and we’ll see who’s got what it takes.

“I’m pretty sure Gamboa watched my last fight. He’s just saying he didn’t to be cocky. I know he at least watched it heading into this fight. We’ll see Saturday night. He’s been a little cocky, so I have to make him pay.

“I can’t say whether I’ll get the knockout, but I’ve trained very hard and I’ve been focused on the main goal, which is to get the win. I know that Gamboa is a tough opponent and he’ll lay it all on the line. If it goes 12 rounds, it doesn’t matter to me. I’m looking to make this a great fight for me and also for the fans.

“I believe that I haven’t gone past nine rounds and I’m undefeated, so I think that’s a good thing for me. I’ve been doing this for so many years that I believe Gamboa can’t bring anything to the ring that I haven’t seen.

“I know that I have to come in there focused, strong and fast. Let’s see what it all comes out to. I’m ready and hopefully he’s ready to give the fans what they want to see.

“Saturday night everyone should be looking for a great fight, not just from Gamboa and me, but the whole undercard. On Saturday night the fight fans win. We’re both bringing our all and we’ll see what Saturday night brings for each of us.”

“My job isn’t to pay attention to any trash talk. My only focus is to go in there at 150% and give it my all. I don’t care about any of the chatter outside of the ring.

“The confidence that I have comes from my focus and the hard work that I’ve put into this camp. I know what I have to do December 28. Everything from camp has unfolded how I wanted to leading into fight night.

“I’m very appreciative to have this opportunity to fight for the world title on Saturday night. I have to make the best of this position that I’m in. I’m still at the level where I know that I can compete and beat the best fighters in the sport.

“My focus and discipline has allowed me to get to the position that I’m in today. I’ve always relied upon that heavily and it hasn’t failed me yet.

“Gervonta knocking his opponents out and not going past the ninth round is great for him, but I don’t think it has anything to do with my resume. I’ve faced stronger fighters than Gervonta and I’ve been able to beat them. He’s not going to bring anything I haven’t seen.

“We’re thrilled that the fight landed in Atlanta and we can tell you that the fans are going to be very happy with the fight they see Saturday. I came here to win and I’m definitely ready to go all 12 rounds if I have to.

“I’ve had a great training camp and I know what I’m able to give on Saturday. I’m giving my all and then some. Atlanta, be ready. We’re going to give you a war.”

“This is my first time in the city of Atlanta and I might have to move here after my victory on Saturday night.

“I’m excited to be able to display my talents on SHOWTIME on Saturday night. I’m at the top of my game and my whole team has helped me get to here.

“Badou Jack is a solid fighter with great defense and good attack. I’ve had a great camp in Puerto Rico. I’ve been away from my family for three months and I’m war ready. Make sure you tune in.

“Badou and I sparred, but it was a long time ago back in 2014. Sparring is sparring. I was getting ready for Sergey Kovalev. It was a good session, but at the time he was at 168-pounds. I don’t rely on that sparring because it was so long ago.

“I know that Badou has had a long layoff and he’s fresh and will be even hungrier. I’m always hungry and that will make it a great fight on Saturday night.

“I’ve been fighting at the highest level for the last 11 years. That means something. I’m a special fighter. I have things that nobody can teach, which is a chin and a heart.”

“I had a great training camp, which everyone says, but I really do feel great. I’m 36 and I feel like I’m 26 again. I can’t wait for Saturday night to hear ‘and the new’.

“I guess you have to wait until Saturday night for me to prove that I still have it. I was flat against Marcus Browne, regardless of the cut, but I feel much better this time than I did heading into that fight.

“All of the close decisions I’ve had in the past, everyone who watched those fights knows that those were wins. Saturday night I’m going to win and there will be no doubt.

“Gervonta was on my undercard and now I’m on his and I’m very proud of him. He’s already a superstar.

“I take care of myself. I don’t do anything outside the ring to jeopardize my career. I have a great nutritionist who gives me all organic foods. You can talk to my strength and conditioning coach as far as how I’m looking, but I feel amazing.

“I’m going to take everything one fight at a time. I think Pascal can bring the best out of me on Saturday night. Styles make fights and I think our styles will mesh.

“Pascal and I both come to fight. Marcus Browne is a southpaw and he’s more evasive. So it’s hard to compare. Pascal is a tough guy and I expect nothing less than a tough fight.”

“I’m grateful to be back in this position and I promise the crowd won’t be disappointed. I’m going to be around for a long time and I’m going to get my world title back.

“I don’t talk much, but since he says I only have power, we’ll see on Saturday. Don’t talk today and then run around the ring.

“After I knock out Lionell Thompson, we’ll see what Caleb Plant has to say after that. I hope he will stand and fight. The only reason Plant is champion is because I messed up.

“When I’m at my best, I’m the best super middleweight on the planet. Everyone will see on Saturday.”

“I want to thank Uzcategui and his team for taking the fight. This is my first time in the super middleweight division and I plan on being victorious.

“To everybody that has helped me and supported me, I promise I won’t let you guys down. I’m planning on giving my best performance on Saturday night.

“I’ve been in there with bigger punchers at light heavyweight and the only time I was stopped was early in my career. I’ve beaten good guys and undefeated prospects that could punch.

“I believe that moving down in weight, and doing it right with a nutritionist, will be better for me. Anyone can hurt you. Everyone says that he can punch, but anyone who hits you right can hurt you.

“I’m focused on being perfect. I don’t plan on making any mistakes. I know what I can do. Anyone who has shared the ring with me will say I’m one of the most skillful fighters out there. Floyd Mayweather even said it.

“I know Uzcategui is tough, but I’m not worried because I’m bringing my best. I believe I’ll be victorious. I respect him and he’s definitely a force to be reckoned with, but I just believe in myself.”

“Saturday night, it’s going to be lit. I’m very excited about this card. I can recall when we first talked about bringing this fight to Atlanta, there was only one name that was synonymous with tapping into a market that hasn’t had a big fight in 20 years. When it comes to excitement, the name Gervonta Davis goes hand in hand.

“We knew that this entire community would be involved. We know that this would be the most talked about event and create a buzz that we haven’t seen in many years.

“We have an outstanding undercard, including a great co-main event with Jean Pascal and Badou Jack, which I guarantee will be a very entertaining match. These two are going to lay it all on the line.

“From top to bottom this is a very entertaining card. Looking at the main event, when you look at Gamboa, you know what he brings to the table. We’re not buying anything about him being an older fighter. He has a phenomenal pedigree and he has seen everything in that ring. This is a very dangerous fight for Gervonta and that’s what we want. We want nothing but the best for Gervonta.

“I think that Gamboa is going to bring out the best in “Tank” on Saturday night. We’re going to give you an entertaining card from top to bottom, with a main event that’s going to end in a knockout.”

“It’s a big weekend for SHOWTIME as we have eight big boxing shows over the next 10 weeks, featuring some of the biggest names in the sport and some of boxing’s top young prospects. We couldn’t kick it off with a better fight card this Saturday night.

“It’s time to quit calling Gervonta a young star or a rising star, because what he has demonstrated this year is that he’s a bonafide star. That is without question when you go into three cities and bring out all the people that he has.

“At the end of the day, none of that matters on Saturday night. That’s what we love about this sport. You have labels, critics and big names, but none of it matters when the bell rings. Each one of these six fighters up here fights like an underdog, because they’ve all been underdogs before.

“Gervonta and Gamboa fight like they’re hungry and like they’re angry. They fight like there’s one plate in the middle of the ring. In the co-main event, with Badou Jack and Jean Pascal, I’ll put their resumes against any fighter in the sport. They’ve fought tough fight after tough fight and they’re still fighting on this stage. Uzcategui is one of the hardest punchers in the sport, and Lionell Thompson is looking for his shot. With all of this together, we’re in for an entertaining night.”