Watch The Encore Presentation Monday At 10 P.M. ET/PT On 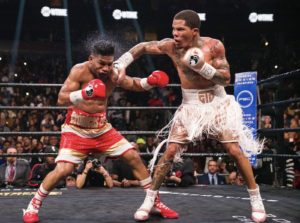 Baltimore’s Davis further cemented his status as one of boxing’s most must-watch attractions, delivering knockdowns in rounds two and eight before delivering the final blow in round 12. Davis’ trademark left-hand was on display all night, causing all three knockdowns including a devastating uppercut in the final round that closed the show in style and brought the fans in a raucous State Farm arena to their feet.

The power-punching southpaw landed on 48 percent of his power punches and established overall leads of 120-78 in overall punches, 27-9 in jabs and 93-69 in power. Davis’ excellent defense was also on display as Gamboa was only able to connect on 13 percent of his punches, including just 3 percent of his jabs.

The 38-year-old Gamboa, who was severely hampered early on by what he believes to be a ruptured Achilles tendon that occurred just before the second-round knockdown, showed tremendous heart and resilience to survive what looked like multiple knockout blows from the 25-year-old Davis.

“Coming into this fight I knew Gamboa was a tough opponent,” said Davis, who went past the ninth round for the first time in his career. “I knew he was a vet. As you see in the ring, I was catching and hurting him but he was still there. I knew he was better than anyone I had fought before. I was mainly focused on catching him with clean shots.  I was catching him with clean shots and wasn’t hurting him, so I knew I was in for rounds tonight.”

When asked by SHOWTIME reporter Jim Gray to grade his own performance, Davis replied with “C-plus.”

In an action-packed and entertaining co-featured bout in which both fighters went down, Jean Pascal (35-6-1, 20 KOs) defended his WBA Light Heavyweight Title with a split-decision victory over two-division champion Badou Jack (22-3-3, 13 KOs), much to the dismay of a pro-Jack crowd at State Farm Arena. The judges scored the fight 114-112 in favor of Pascal twice, and 114-112 in favor of Jack once.

Fought at a blazing pace from the opening bell, the bout was a tale of two halves. Pascal led 50-44 on all three scorecards after five rounds and controlled much of the fight’s first half as he started quickly and scored a fourth-round knockdown. Jack, who went down for the fourth time in his career, was caught on the temple by a massive overhand right that sent him stumbling to the canvas.

However, Sweden’s Jack finished the fight strongly, out-landing Pascal 141-76 in overall punches and 134-121 in power punches. He capped off what he thought would be a victorious fight with a devastating four-punch barrage that knocked down Pascal for just the second time in his career in the 12th round. Jack finished the fight with advantages of 244-155 in overall punches landed, including 120-35 in jabs and 124-120 on power punches. Jack was also the more accurate puncher (39 percent to 28 percent overall) but Pascal’s punches hurt Jack at the end of several rounds.

Both fighters put in an extraordinary performance, particularly in the 12th round, a late contender for round of the year, as Pascal and Jack both looked to close the show until the final bell. When asked about a possible rematch, Pascal and Jack both expressed an interest.

“I can finish every round very strong.  I’m a strong, pressure fighter. Badou – thanks for the fight.  I know the crowd enjoyed the show. I’ll do the rematch any time”

“Of course I feel I won the fight, but it is what it is,” said Jack, who has now had six of his last eight fights end in draws, split decisions or majority decisions. “He’s got a hell of a chin, he’s a tough warrior and I want to thank him for the opportunity. I thought I was winning but maybe I’m wrong.  I would love a rematch.”

“I think he caught me up here (on top of head),” he said when asked by Gray about the fourth-round knockdown. “I didn’t really see the punch.  I wasn’t that hurt but it was a good punch.”

In the telecast opener, Lionell Thompson (22-5, 12 KOs) made his debut at 168 pounds in phenomenal fashion, upsetting former IBF titlist Jose Uzcátegui (29-4, 24 KOs) with a decisive unanimous decision. The judges scored the fight 95-94 and 96-92 twice.

Thompson, who had campaigned as a light heavyweight his entire career, overcame a cut over his right eye in the third round and a point deduction for holding in the fourth. He scored the fight’s only knockdown in the first round, landing a textbook one-two combination that floored the Venezuelan Uzcátegui for the fifth time in his career.

Thompson was the far more accurate puncher, holding advantages of 32 percent to 19 percent in overall punches and 32 percent to 13 percent in jabs. The Buffalo, N.Y. native also out-landed Uzcátegui in nine of the ten rounds including an overall advantage of 80-21 connected jabs.

“Moving down to 168 (pounds), I was a little worried for my first fight but I felt great,” said the 34-year-old Thompson. “I still had the power at this weight and I hurt him a few times. This is my weight class now and I think I have a real chance at becoming super middleweight champion and putting my city on the map as the first world champion from Buffalo.”

“I thought the decision was fair,” said the 29-year-old Uzcátegui, who has now dropped two of his last three fights. “I don’t want to make any excuses. He came to fight. The distance from my last fight definitely showed. I was very rusty. I need to get back in the gym train harder and hopefully get another fight in the next few months.”

Both fighters showed glimpses of their potential throughout the five rounds before Price suffered a right knee injury and was unable to continue. The 30-year-old Price pulled up limping after taking an awkward step, and Hawkins closed in on him looking for the finish. After referee Brian Stutts broke the action up, Price informed Stutts he was unable to continue, handing Hawkins the win.

The opening streaming bout saw undefeated prospect Angelo Leo (19-0, 9 KOs) stop Cesar Juarez (25-8, 19 KOs) to pick up the most impressive win of his career and put himself in position to fight for a world title in the near future.

In the IBF 122-pound Title Eliminator, Leo knocked down Juarez three separate times before picking up the TKO victory at 1:12 of round number 11. The finishing blow was a vicious right hand and while Juarez beat the count, referee Jim Korb waved the fight off.