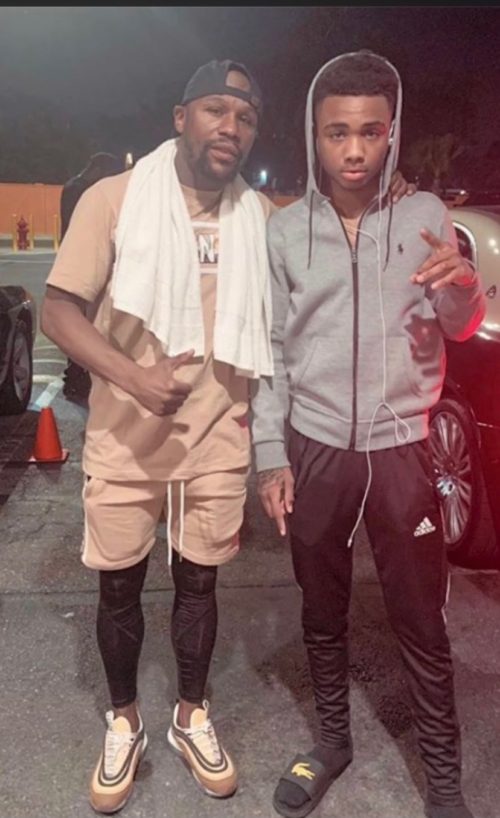 
Khan Jr., ranked #2 by USA boxing (as of January 8, 2020) at 123lbs has held numerous titles in the amateur ranks including Silver Gloves Nationals 2x, 13x National Champion Monkstown International Box, and boasts an amateur record of 135-13. He attributes his fight style to the same man who made it official, Floyd Mayweather. After traveling back and forth from Buckeye, Arizona to the fight capital for six years, the 18-year-old found himself at the famed Mayweather Boxing Club at the perfect time catching the eye of 4x champion Gervonta Davis’, while he was preparing for his championship bout against Leo Santa Cruz. Davis’ camp invited Khan to return to the gym and spar with Gervonta again. Floyd was actively at the gym during this time and also took notice of the aggressive and effective style Khan possessed and advised him to make the move to Vegas and made it official.


“Floyd is my biggest inspiration,” said Khan, and now he’s my promoter. “I grew up watching him on T.V. and would use that as motivation to perfect my skill, especially the shoulder roll. “I want to follow Champ’s path and provide for my family, invest, and start businesses, so this is the perfect home for me to start my professional career.”


Khan’s boxing discovery story isn’t like most, by that, he was introduced to boxing by his grandmother who bought him a pair of boxing gloves and a dummy bag at age 2. Last year, the decorated amateur honored his grandmother with a tattoo to show his appreciation for introducing him to the sport. Known for being a fighter growing up, Khan would walk around punching things and his bag, so it was a natural transition to taking up boxing, which his parents fully supported. By age 4, he entered his first gym, and his father Dorian Khan Sr. began training his son to compete seriously. Solely focusing on boxing coupled with his natural athleticism, Khan was able to develop a natural skill set allowing him to compete and place in various tournaments. The aspiring fighter recalls trips to Vegas where he had priceless training experiences with the late Roger Mayweather, hitting the pad for hours stating that those were the moment that solidified his love for the sport and hunger to be the best.

The promising amateur looks to make his debut at 126 and cherishes every experience he’s had to get to this point. Be on the lookout for more news and information regarding his professional debut.