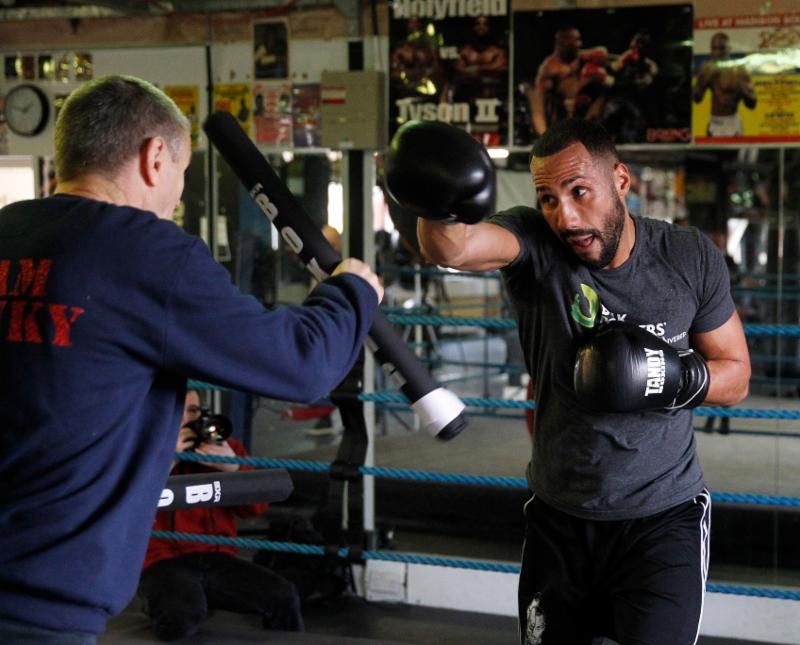 SHOWTIME CHAMPIONSHIP BOXING® Doubleheader at 10 p.m. ET/7 p.m. PT
From The DC Armory in Washington, D.C.
Click HERE For Photos From Lawrence Lustig/Matchroom Boxing
LONDON (March 29, 2016) – IBF Super Middleweight World Champion James DeGale held an open media workout on Tuesday in London as he prepares to make the second defense of his title against mandatory challenger Rogelio Medina on Saturday, April 30, live on SHOWTIME from theDC Armory in Washington, D.C.
In the main event of the SHOWTIME CHAMPIONSHIP BOXING doubleheader (10 p.m. ET/7 p.m. PT), WBC 168-pound champion Badou Jack defends his title against former longtime titlist Lucian Bute.  The winners will meet in a super middleweight world-title unification fight later this year.
Tickets for the live event, which is promoted by Mayweather Promotions and Interbox in association with Matchroom Boxing, are priced at $200, $100, $50 and $25, and are on sale now. To purchase tickets visit www.ticketmaster.com, Ticketmaster locations or call (800) 745-3000.
See below for quotes from DeGale as he prepares to face Medina:
“I’ve never disrespected an opponent yet in the ring and I’m not going to start now.  Medina has a very good record and that means he is as dangerous and the next man.  This is boxing and unless you prepare properly you get found out.  I’m not going down that avenue.  I’m a winner and what I do is get in the ring and win. That’s what Medina is up against – a world champion and a winner.
“I’m too good for him, too fast, too strong, too quick.  I’ll beat him and it is just a question of how. I don’t care how it comes as long as I look good and I give the fans what they want, another winning performance and a reminder that I am the best super middleweight out there operating today.
“I respect Medina, but I belong in a different level and I will show that on April 30.
“I’m looking forward to it because this is another chance to show what I can do in America and it is also a mini-tournament.  The winner of my fight faces the winner of Badou Jack and Lucian Bute and that means a world unification clash.  I want to clean up the division and I have the opportunity to do that.
“I think Jack will win, but I’ve been in the ring with Bute and I know how strong he is.  He is a proper fighter and I would always give him a chance against anyone.  I think Jack will be too good for him, but who knows?  I hope it is Jack as I’ve already taken care of business against Bute, but I want to unify the titles and that means I will fight whoever is put in front of me.
“I’ve no trouble fighting in the U.S. and never will.  I would love to win again and take on the winner of Jack and Bute in London, but that is down the line.  What I am concentrating on right now is the next person who is standing in my way and that is Medina.
“I can’t wait to get back in action because I live for fighting. It is in my blood and I know that a win over Medina means a very lucrative fight with Jack or Bute.  I’m in this to make me financially comfortable for the rest of my life but above all, I’m in it for the glory.
“The day I became world champion was the best of my life, along with winning Olympic Gold, and I don’t want to be a world champion for a few months.  I want to be recognized as one of the greats in the super middleweight division.  That means win a title and defend it against all-comers, anywhere and everywhere.”
For more information visit www.mayweatherpromotions.com and www.SHO.com/Sports and follow on Twitter at: @BadouJack, @ButeLucian, @JamesDeGale1, @PorkyMedina @MayweatherPromo, @SHOSports and @Swanson_Comm or become a fan on Facebook atwww.facebook.com/MayweatherPromotions and www.facebook.com/SHOsports.
CONTACTS:  Kelly Swanson/Lisa Milner, Swanson Communications/Floyd Mayweather: (202) 783-5500
Nicole Craig, Mayweather Promotions: (702) 807-1788
Chris DeBlasio, Showtime Networks Inc.: (212) 708-1633
Matt Donovan, Showtime Networks Inc.: (212) 708-1663
Flo Jocou, Showtime Networks Inc.: (212) 708-7319
John Beyrooty, BZA/SHOWTIME: (562) 233-7477
Media Credentials: www.magnamedia.com