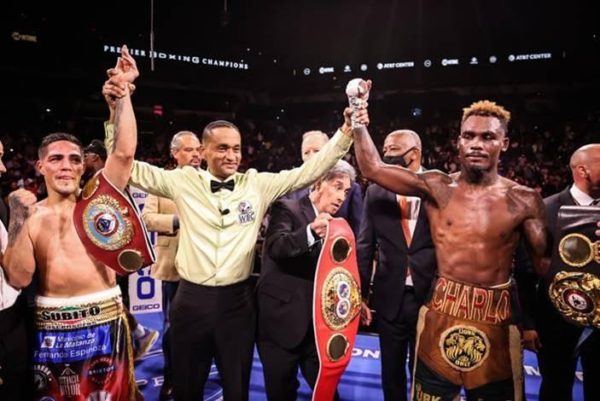 “Shout out to San Antonio for coming through. The win is what I wanted to hear,” said Charlo. “I won this fight. I hurt him way more than he did to me. Castaño is a real warrior. But my power is serious at this weight division.”

Both champions flashed their power early on. Castaño was staggered by a counter left hook in the second. He returned the favor in the third, buckling Charlo with his own left hook toward the end of the frame.

Houston’s Charlo found success in the middle rounds by boxing and moving from the outside. Castaño was just as effective when he was able to maneuver Charlo toward the ropes and unload rapid-fire combinations. The Argentine kept Charlo on the defensive for much of the ninth, focusing his attack to the body.

Immediately after that round, Charlo trainer Derrick James implored his fighter to pick up the pace. Charlo responded with his best round in the 10th, bouncing off the ropes with a left hook that left Castaño on shaky legs for much of the stanza. In the penultimate round, Charlo picked up where he left off, landing more big shots on a tentative Castaño.

“My coach told me I needed the knockout in the ninth round and I just knew he knew what he was talking about,” said Charlo. “I trust my coach. This comes with boxing – wins, losses and draws.”

“I was hurt in the 10th round and I had to recoup,” said Castaño. “Same with the beginning of the 11th round. But I did enough to win this fight. I hope I get the rematch. He is a great fighter. I need the rematch.”

“He threw a hell of a lot of punches. My skills and my ability and my power – I felt like I won this fight and I deserve to be going home undisputed,” said Charlo. “I am glad to have fought for undisputed. It’s different. I still hold my titles. I can’t wait to get home to my babies, take a break from boxing and then get back to the drawing board and see what’s next. I want to be undisputed. That’s what I want. That’s my destiny.”

Romero controlled the action throughout, punishing southpaw Yigit to the head and body.

“I won’t rate my performance but I got a vicious knockout and I hurt him multiple times in the fight. Every time I landed something, I hurt him,” said Romero. “The European style is always awkward and he was a bigger dude. He’s a 140-pounder. If I had those extra five pounds, I would have got him out of there earlier.”

“I knew he was going to come in strong and kind of force it,” said Yigit. “So, I tried to pace myself at the beginning to see where I had him. He was very aggressive and he knew how to utilize all his strengths. Fair play to him.”

The first knockdown occurred in the fifth when, immediately after having a point deducted for hitting on the break, Romero sent Yigit crumpling to the canvas with a short right to the temple. Yigit rose to his feet on wobbly legs and was saved by a bell that rang moments later.

“He was hurt [in the fifth] but the bell rang so I didn’t have time to finish him,” said Romero. “If I had that extra time, I would have got him. He was holding, he didn’t really want to engage because he was really hurt. He was scared.”

Yigit ate more bombs in the sixth but couldn’t withstand them in the seventh as Romero dropped him, this time with a three punch-combination. Romero pounced once Yigit rose, unleashing volleys until a left hook floored Yigit a third time, forcing referee Rafael Ramos to halt the action at 1:54 of the seventh round.

“I wouldn’t mind doing it again,” said Yigit. “He was a tough opponent and I liked the fight we were having. There is some kind of mutual respect in the ring and I felt that from him. So, it felt great knowing that I went in the ring and we respected each other and gave it the best we had.”

“The punches he landed clean, I saw them coming,” said Romero.” I have to work on more combinations. I had a bad camp – at the beginning I hurt both of my ankles and my right hand. I was in a car accident a week and a half ago. My body was still sore from that yet I still took the fight.

In the televised opener on SHOWTIME, Amilcar Vidal Jr. (13-0, 11 KOs) remained unbeaten with a thrilling 10-round majority decision over a determined Immanuwel Aleem.

“It was a great fight against a really tough opponent, but the fruits of my labor alongside my brother during training camp paid off and I never lost my cool,” said Vidal. “I believe I was a fair winner, but I am not here to argue about the score. I may have lost my way in a couple of rounds, but I regained control of the fight and I have as much as I took.”

After a feel-out first round, both fighters began letting their hands go in the second as Aleem (18-3-2, 11 KOs) peppered Vidal with jabs from the outside and Vidal bore in with heavy shots to the head and body.

Uruguay’s Vidal enjoyed his best round in the sixth, trapping Aleem along the ropes and landing a left hook to the ribs that caused the Richmond, Virginia native to double over in pain. Two more rights snapped Aleem’s head back moments before the bell sounded.

Just when it appeared Vidal had seized control, Aleem roared back in the seventh, keeping the fight at a distance and landing combinations. Aleem enjoyed an even better eighth, momentarily staggering Vidal with a left hook. The see-saw action continued over the final two rounds, both giving as good as they got as the crowd roared their appreciation. In the end, one judge had it even at 95-95, while the two other saw it in favor of Vidal by scores of 97-93.

“Like I told you before the press conference, it’s about going step by step,” said Vidal. “We took a major one tonight, and now my promoter will let me know what’s next. I’ll be ready. Uruguay can rest easy knowing Amilcar Vidal is here to stay.”

On Friday, July 23 at 9 p.m. ET/6 p.m. PT, ShoBox: The New Generation will celebrate its 20th anniversary with a stacked tripleheader headlined by a battle of unbeatens between super middleweight prospects Kalvin Henderson and Isaiah Steen from Heartland Events Center in Grand Island, Nebraska on SHOWTIME.

Tonight’s event on SHOWTIME was promoted by Lions Only Promotions and TGB Promotions. Romero vs. Yigit was co-promoted with Mayweather Promotions.