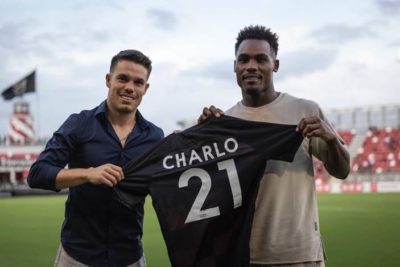 “This game was a great opportunity for me to spend some time with the fans here in San Antonio and let them know that I’m going to give them all a great show on July 17,” said Charlo. “Everyone who came out here can see that I’m ready to become the undisputed 154-pound champion and make this a memorable night at AT&T Center.

“I definitely want to thank San Antonio FC for having me, honoring me on the field, and to all their fans for making me feel welcome. I can’t wait to repay them on fight night.”

In addition to meeting scores of fans prior to San Antonio FC’s first game welcoming fans back with full capacity to Toyota Field, Charlo exchanged a boxing glove for a personalized jersey with San Antonio FC midfielder Victor Giro in a pregame ceremony.

Charlo will look to thrill those fans in the boxing-rich city of San Antonio on July 17 when he puts his three titles on the line against the hard-charging world champion Castaño. The winner of this matchup will become the first four-belt champion of the 154-pound division.

Tickets for the live event, which is promoted by Lions Only Promotions and TGB Promotions, are on sale now and can be purchased through www.attcenter.com.

Tickets for the live event, which is promoted by Lions Only Promotions and TGB Promotions, are on sale now and can be purchased through www.attcenter.com. Romero vs. Dulay is co-promoted with Mayweather Promotions.