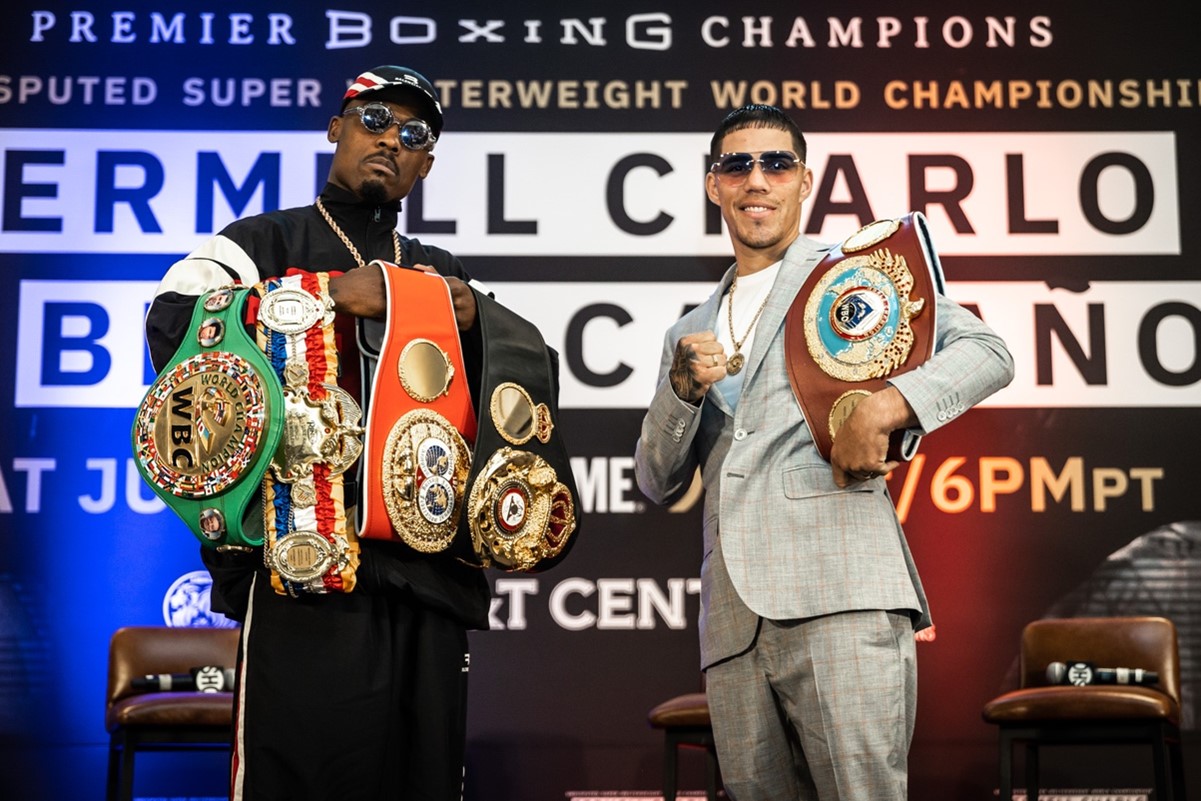 Ahead of Undisputed Title Showdown This Saturday, July 17

The hard-hitting unified champion Charlo and the exciting Argentine Castaño will go toe-to-toe as all of the super welterweight championship belts are on the line for the first time in the four-belt era. The highly anticipated matchup will add to the long and storied history of major championship fights to take place in San Antonio.

Here is what the press conference participants had to say Thursday from San Antonio:

“I’m excited to be fighting back in Texas, but I’ll fight anywhere. As long as everyone tunes in, they know what time it is. I’m more than ready. I’m excited and anxious to get in the ring.

“This is a dream come true. I’ve wanted to be undisputed since I was a child because this is the highest you can reach in boxing. Being in this moment really makes me thankful to my whole team who helped me get to this point.

“Now is the time that me and my brother finally get the opportunity to show the world what we’re worth. This is the moment for us. Opportunities like this don’t come around too often, so I have to go out there and take advantage.

“I’m not old enough to think about the Hall of Fame yet. I’m just focusing on the right now. I have a goal to accomplish that will take 36 minutes or less on Saturday. I’ll look into everything else that this means after Saturday night.

“I can’t predict the future, but just know that I’m stronger and faster than I was before. I just feel like I’m ready. I have power in every punch I throw and I’m thankful for this opportunity to face another champion.

“I have the don’t blink attitude for this fight. You never know what could happen at any moment of any round. I’ve knocked people out in just about every round. We’re both in good shape, so we’re going to find out who’s better Saturday.

“A focused Jermell is the most dangerous Jermell there could be. I have different skill sets that I can implement in this fight no matter what Castaño does. I have a lot that I can do depending what Castaño brings.

“My loss was just all part of God’s plan. After the controversial loss, I got right back in there for the rematch. I had jet fuel in me and went on to unify and now we’re going to keep going. There’s no stopping the show.

“It’s dangerous for him to come forward and walk into shots. Most opponents that I’ve faced who’ve done that, I’ve put them out. We’ll see if he’s able to stand up to the power.

“I put my life on the line to feed my family. I have a lot of things that I need the boxing world to understand before my career is over. You can see that I’ve always faced tough opponents. My mindset was always stay focused, so you don’t get cut, like in the NFL. You have to work hard so nobody takes your position. That’s how I look at it mentally. I’m in a great position, but I still have a lot more to prove.”

“For me and my team, this is yet another opportunity to lift Argentine boxing up and add another star to that legacy. That’s what I want and I’m enjoying this moment. I promise that on Saturday night, I’m going to leave it all in the ring for everybody.

“He has all the pressure on him being in his home state. I’ve been training so hard for nine months and I’m comfortable as the underdog. I always come in as the underdog, so I don’t feel any pressure.

“When it comes down to it, if I have to lower my punch output to put more power on my punches, then I will. I don’t like to focus on past fights, because we have our own game plans for this fight. I have a plan to come out victorious Saturday night.

“We have a war to fight on July 17. I’m not thinking about anything beyond that fight. My mind is fully set on becoming undisputed champion Saturday night.

“I want to make not only Argentina, but all of Latin America proud. That’s what I want to do on Saturday night.

“In the end, I can only focus on what I’m going to do. If Charlo wants to be more finesse, I can deal with that, and if he wants to brawl, then by all means I will welcome that as well.

“Seeing Argentina win the Copa America last Saturday night motivated me even more. Messi deserved his title, and he made the entire country happy. I hope that the party can continue a week later with an undisputed champion as well

“Height and reach are the only similarities between Jermell and Erislandy Lara and Michel Soro. He’s his own man and he’s certainly a tough opponent to face.”

“I’m going to stop him in the first round on Saturday. I’m confident in what I say and what I’ll do in the ring.

“I love fighting lefties. I prepared to face a southpaw first in Austin Dulay anyway. This camp has been amazing. I can’t even talk about all the times I’ve stopped people in camp.

“Like every single time I fight, make sure you show up on time. If you show up late, you’re going to miss a knockout.

“I’m just a different fighter from these other lightweights. You can’t prepare for me because I’m awkward. No one has ever seen my style before, plus I have power.

“I’m just happy Yigit stepped up and took this fight. I’m used to people not taking fights with me. I can’t knock him on that.

“I said I like fighting southpaws because they’re easier to hit, simple as that. Look at what I do to southpaws. I didn’t have to change my preparation at all with the change in opponent. A southpaw is a southpaw, it’s not like he’s Manny Pacquiao.”

“I’m not worried about my layoff from the ring. I’m always training and making sure that I’m in shape and ready for fights like these.

“I fought for the world title once, so I know that people are going to try to bring me in last minute with my experience and try to catch me off-guard. I was already prepared for war, so everything worked out as planned.

“If anything, 135 pounds is my real weight class. In Europe I’ve done quite well at 140, so I didn’t feel like I needed to come down. When I fought for the title I realized 140 may be too big for me.

“I’m highly ranked at 140-pounds, so that’s just where I’ve been getting the best opportunities. Now I’m here, making my move to the States and there’s no better time for me to announce my presence.

“Fans can expect a great fight Saturday. I’m going to get the win by any means. That’s why I’m here. I understand his confidence. We’re both here to win. This is the perfect co-main event to get people warmed up for the main event.”

“I have a great opponent in front of me. He has a good resume in his own right. So I’m focusing on what I can do, because we’ve put in all the hard work in the gym and you’ll see it all in the ring on Saturday.

“With the effort that I put in to training camp, you can expect that I’m going to leave the ring victorious Saturday night.

“I feel great, absolutely motivated and ready to give 100% on Saturday night. We know that we have a quality opponent in front of us, but I have proven my worth and my skills. That’s the reason I’m here.

“We had a great training camp. It was hard and complicated at first to be so far away from Uruguay, because I’m very close to my family, but that’s part of the job. I am more and more motivated each day and I know that my family is supporting me from home. They are proud of me, for sure.”

“I hope to be able to honor my country and raise our flag up high. Both of Uruguay’s world champions, Cris (Namos) and Cecilia (Comunales) called me to wish me all the best and tell me they believe in me too.”

“I’m looking forward to being a world champion and it all starts Saturday. Whatever he’s going to bring, I’m going to be ready. I have one of the best trainers in the game in Ronnie Shields in my corner. This is not going to be an easy fight for him.

“I’ve been working with the champs. The best of the 154 and 160-pound division. So ring rust will not be a problem for me.

“Expect a real fight on Saturday. Everyone knows that when you step in with me, it’s going to be a real fight. There’s no easy fights with me.

“They want to see what Vidal can do in a big fight. We’ll find out if he has enough on Saturday, but no matter what, he’s in for a real test.”

“You don’t need me to tell you how big this card is. This is the undisputed 154-pound title. That’s all you have to say. We have six fighters up here with four losses between them. This is a high quality card from top to bottom.

“The opening bout between Vidal and Aleem is a co-feature or maybe a main event on any other network. ‘Rolly’ Romero is one of the most entertaining fighters at lightweight and he’s in against a tough substitute opponent in Anthony Yigit.

“This main event is the best against the best. Jermell is the consensus number one fighter in the division and we’re thrilled to have him back on SHOWTIME. But there’s another fighter who may have an argument about who is number one and that’s Castaño. This is a real fight and whoever emerges as the victor on Saturday night has earned the undisputed title.”