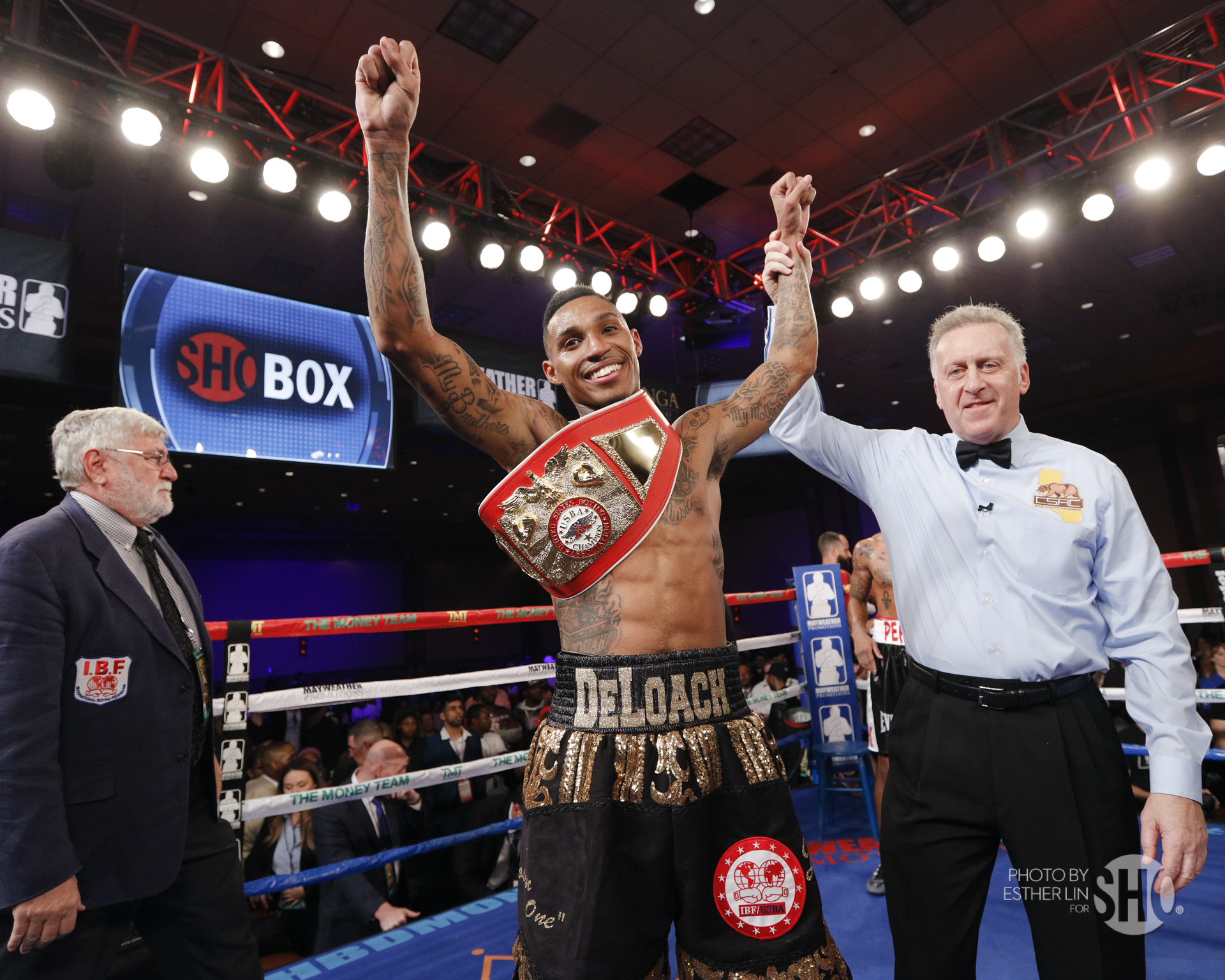 TEMECULA, Calif. (Feb. 24, 2017) – Justin “The Chosen One” DeLoach scored a shocking upset over Chris “Young King” Pearson in a second-round knockout victory on Friday in the main event of ShoBox: The New Generation on SHOWTIME in front of a sellout crowd from Pechanga Resort & Casino in Temecula.

DeLoach, (17-1, 9 KOs), of Augusta, Ga. continued his impressive winning streak with his seventh straight victory as he claimed the vacant USBA super welterweight title with the win, knocking out Pearson (14-2, 10 KOs, WSB 3-0, 1 KO) at 2:30 of the second round.

Pearson, who trains in Las Vegas and fights out of Dayton, Ohio, was first knocked down after a strong DeLoach left hook that caught Pearson sideways and dropped him to the canvas with one minute to go in Round 2.

DeLoach didn’t let up, going after the hurting Pearson with a flurry of combinations sending him down again on a straight up right hand and leaving Pearson on his knees for the entire 10-second count.

“I’m not surprised that it happened so quickly,” DeLoach said. “We had a strategy and we stuck to it. Hard work pays off and that was proof. I didn’t think I was an underdog, but I understand the whole thing of psychological warfare. I always go into the ring like I am on top no matter what.”

The southpaw Pearson, who was appearing on ShoBox for third time, never got going and landed just one body punch in the short fight connecting on just nine percent of his total punches (four of 43) compared to 32 percent for DeLoach (29 of 92).

“Pearson seemed a step slower from the start and DeLoach came forward,” said ShoBox expert analyst Steve Farhood, who later called the DeLoach win a shocker. “Wow. Even if you liked DeLoach to win this fight, you are surprised it happened this soon.”

He later added: “I thought it was going to be a distance fight. Pearson never recovered from his loss to Eric Walker. DeLoach continues to surprise. This is his fourth consecutive major win and now I believe he’s a contender at 154 pounds—maybe one or two fights away from a world title fight.”

The bout was originally scheduled for last September before Pearson was forced to withdraw due to an injury suffered in training.

“I felt lackluster,” Pearson said. “He came out and he was explosive, he was busy. He didn’t do anything I didn’t expect. Things happened the way they did, and you gotta take the good with the bad. He hit me in the eye which got me a bit disoriented. He fought like I thought he would, he did what he had to do. His performance didn’t surprise me.”

DeLoach was clearly overcome with emotion as he reflected on his huge victory. “I feel great,” DeLoach said. “I am emotional right now. I come from a small city and my mom is here and she’s in tears. Seeing my mom and my family here, I am just proud.”

In the co-main event of the evening, undefeated up-and-coming prospect Saul “Neno” Rodriguez (21-0-1, 15 KOs) of nearby Riverside won a split decision treating the hometown fans to a close outcome against a tough and game Oscar “La Máquina” Bravo (22-7, 10 KOs) in a 10-round lightweight battle.

Judge Carla Caiz scored it 95-94 for Rodriguez; Tony Crebs 95-94 for Bravo and Jerry Cantu 97-92 in favor of the still undefeated Rodriguez, who had never been past eight rounds before Saturday night, and also was knocked down for the first time in his career in the fifth round.

“I was pretty happy with my performance, but I know there are a few things I need to work on and really just stay focused,” Rodriguez said. “When you’re fighting a wild opponent like Bravo, it gets tough, he head-butted me a few times which affected my visual, but I didn’t let his wild style interrupt my plan.

“I was definitely going for the KO throughout the night, but I was still boxing with him. I just gotta go back in the gym and continue developing as a fighter, I am just happy to bring the win home to my hometown and my home stable [Mayweather Promotions].”

with 1:50 left in the fifth round giving Bravo a huge 10-8 round. In the sixth round Bravo, 29, was again impressive and was able to effectively get inside against Rodriguez and land several powerful combinations.

Going into the final round, the two were almost equal in number of punches thrown and number of punches connected. Rodriguez was a bit more active in the end, connecting on 33 percent of his punches (174 of 522) compared to 31 percent for Bravo (155 of 497).

The 27-year-old Tabiti was simply too skilled and powerful for the out-manned 34-year-old Graves, who was fighting for just the second time in the past 27 months.

Near the end of the fourth round Tabiti – fighting for the second time on ShoBox – unleashed a series of powerful combinations that all but ended the fight putting the visibly hurt Graves against the ropes before he was saved by the bell.

In the sixth round, Tabiti hurt Graves again leaving him back-pedaling and finally sending him to the canvas for the first time in his professional career with a brutal body shot. Graves never made it out for the seventh round as he and his corner threw in the towel in between rounds. The referee, Ray Corona, signaled the end of the fight.

“As soon as I got in the ring, I knew it was game over for him,” Tabiti said. “Figuring out his game plan was easy money. The only thing I feel I could have done better was get him out of the fight quicker. He was talking a lot before the fight, but I didn’t let that get in my head I just came out and did what I was supposed to do.

Graves connected on only three body punches on the night, compared to 29 for Tabiti, who landed 43 percent of his total punches, compared to just 11 percent for Graves, who was the 159th fighter to lose his undefeated record on ShoBox.

“Tabiti is very fast,” Graves said. “I’ve been boxing for 19 years and I’ve never fought anyone as fast as him. I have no excuses. It is okay. Tabiti was cocky before the fight and humble after. He just needs to keep working hard and perfect his skills.”

Friday’s three-fight telecast will re-air Monday, Feb. 27 at 10 p.m. ET/PT on SHOWTIME EXTREME and will be available on SHOWTIME ON DEMAND beginning Feb. 25.