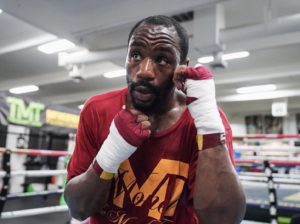 LAS VEGAS – Battle-tested light heavyweight contender, Lionell “Lonnie B” Thompson 20-5 (11 KO’s) and Bedford, Virginia’s Scott “Cujo” Sigmon 34-13-1 (17 KO’s), spoke about their respective training camps and upcoming matchup before they enter the ring on Saturday, September 20 from The Club at the Cannery Hotel & Casino in Las Vegas.

Lionell “Lonnie B” Thompson was introduced to the sweet science at the age of 16, a passion that would later mold him into a decorated amateur, Golden Gloves champion, participant of the 2008 Olympic boxing team, and a skilled professional fighter. Confident in his talent and skills, Thompson will be returning to the ring for the first time after a year lay-off, stronger and more focused than ever before with the help of longtime trainer Donald Patterson and Chris Ben-Tchavtchavadze.

Bedford, Virginia native, Scott “Cujo” Sigmon has added multiple notable names on his growing resume, including Thompson’s stablemates. Thirty-two-year-old Sigmon began his boxing career at the age of 17 as an escape outlet to his troubled childhood. He trains with Jeff Austin at his personal boxing gym that he has owned and operated for the last 10 years, The Hurt Factory Boxing & Fitness. Sigmon’s recent bout ended in a unanimous decision victory over Ronnie Glass on April 13, 2019. Sigmon is no stranger to Las Vegas and is looking to make his return to the city after 3 years, when he faces Thompson.

Thompson: “He’s tough, I know that he’s never been stopped before. He’s also been in the ring with some good quality guys. Every opponent poses a threat to you because they have hands and one punch can change everything. The best you can do is to plan and train, but you can never plan what’s going to happen. I’m taking this fight extremely serious, as if I’m fighting for a world title.”

Sigmon: “Thompson is quick-footed, and I know he is going to box and stay away from me the whole fight.”

How has training camp been going? Have you made any recent adjustments to your camp?

Thompson: “The layoff has been great for me because I used the time to learn my body, learn how to eat right, and reprogram my whole body. I’m always in shape or doing my best to be in shape. The only adjustment I’ve made is dieting the right way, eating the right things, and learning the nutritional part of boxing. I’ve been working on it for the past year along with getting a good amount of rest and learning how to recover properly. I’m also working on throwing a lot more punches and picking the pace up more each round.”

Sigmon: “I had a great 8-week camp for a fight on September 1st, which was derailed by a slight shoulder injury I had. I’ve been training around it and doing my rehab. I have not lost any conditioning during this time and expect to parlay that work into September 20th.”

How do you expect this fight to look? What is your fight prediction?

Thompson: “I am 1,000% sure that I am going to be victorious, but I am just focused on getting the knockout and seeing how my energy level is. I’m always looking for the stoppage. I’m looking to be extremely impressive and dominant from the opening bell until the fight is over.”

Sigmon: “I am going to come forward and cut the ring off and Thompson is going to move and stay away, this is definitely a contrast in styles.”

On what a win from this fight will do for their career:

Thompson: “I’m praying that this win will get me a big fight, someone in the top 10 or a title fight. I think I deserve it because I’ve paid my dues in boxing and I’ve done everything that someone with 5 losses can do. At 168, I think that a win should give me a big fight. I feel that I can beat any champion in the super middleweight division and any top 10 fighters in the division.”

Sigmon: “A win over Lionell Thompson would be a step in the right direction to a bigger payday for me.”

Who would you like to go after next with a win on September 20?

Thompson: “Anybody, I can go for Peter Quillin, winner of Dirrell vs. Benavidez, Caleb Plant, and so many guys at 168. I feel like I am an uncrowned champion. I’m keeping my faith in god and doing my part in working hard and I truly believe that I didn’t make it this far for this to be it. One day I will be the super middleweight champion of the world.”

Sigmon: “I am not new to the business so my first option would be to make another fight with Mayweather Promotions. I would like a rematch with Love or Bellows, but of course I want to land the big fish Badou Jack! I’ll take it one step at a time.”