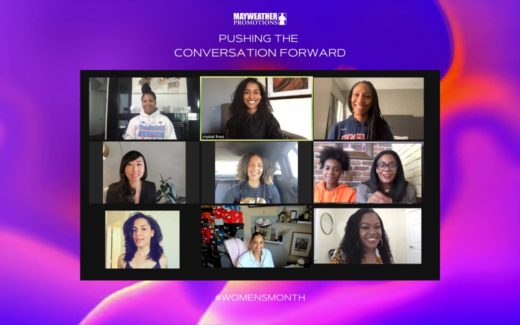 The series premiered on March 3 and currently lives on Mayweather Promotions’ YouTube & Facebook channel with new episodes on the way.

“Our goal as an industry leading company in sports & entertainment is to continue to  shine a light on the outstanding women who help shape this world and culture,” said VP of Marketing & Operations Nicole Craig. “The series will continue to live on beyond Women’s Month with an aim to release new content on a quarterly basis. We thank both Floyd Mayweather & Leonard Ellerbe for allowing us to use our platform to help spread positivity and awareness.”

“We pushed the conversation forward and no stones were unturned during this series,” said Marketing Manager, Crystal Frost. “There’s something for everyone within each conversation. Each episode highlights a certain aspect of everyday struggles and hurdles women face. You’ll laugh, feel uplifted, gain confidence, and more as you hear each story.”

“The biggest challenge is still trying to be accepted as a woman, and do it your own way,” said former boxing world champion, Ava Knight. “Everyone has their own opinion on how you should do it. People say, “sex sells, be this, be that.” “My hope is that it gets better for younger girls-that they can just be themselves.”

“I’m super grateful for the people that gave me an opportunity and saw the potential in me. “It’s good to have a competitive edge and want to be the best, but you also don’t want to be too selfish where you’re blocking your blessings because when you give back you get back, said Jordan Plant in her candid interview about her path to becoming a sports reporter in a competitive industry.

Founder of CMPR, Dominique Simpson recalls channeling her talents into a career change. “I found situations where I could get in where I fit in and just leverage them. “I flew in with my ideas ready to work (sometimes for free) and I created opportunities for myself.”

Denise Jones of Lakers Nation shared her journey of perseverance and becoming the youngest overnight producer in late night radio. “I remember growing up in L.A. wanting to work for the best radio station in the city, Power 106. After applying several times and getting turned down, I kept being persistent. I took other jobs in radio, but I wasn’t going to let that “no” sway me from my dreams. Then one day I got the call. You can’t give up on your dreams.”

Sisters and former professional basketball players, Stefanie Gilbreath & Briana Butler had their share of successes and hurdles, while transitioning from their pro-careers to becoming entrepreneurs highlighting the importance of support. “We wouldn’t be here without the support of our family, said Stefanie who battled multiple injuries which ultimately led her to leaving the sport, but it was her sister Briana’s love for nutrition that helped Stefanie cope. “I don’t know what I would have done without having my sister here going through the same things, but we had an opportunity to go through them together and help each other get out of dark places, which ultimately led to us founding nutrition company, Power Portions.”

Founder of Vegas-based events company Jennifer Burbank wears perseverance on her sleeve and carries a relentless spirit. “I would remind myself that perseverance is everything in my hardest moments of failure. “I used FOMO (fear of missing out) to my advantage, I always thought, “what if today” is that one day I finally catch a break.”

WNBA superstar, 2x MVP and ‘shifter’, A’ja Wilson penned two open letters at the height of the Breona Taylor & George Floyd protests, Dear Black Girls & Dear Black Women. “I felt black women just constantly got swept underneath the rug, I felt like we were constantly fighting this battle and I wanted to share my own story to help other young girls.”