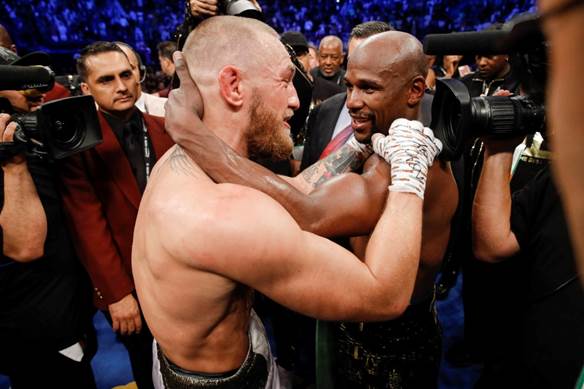 The unprecedented Floyd Mayweather vs. Conor McGregor blockbuster, the final fight of Mayweather’s illustrious career, will premiere on SHOWTIME this Saturday, Sept. 2 at 9 p.m. ET/PT.  The showdown between the future Hall of Famer and the UFC superstar originally aired live on SHOWTIME PPV® on Saturday, August 26 at the T-Mobile Arena in Las Vegas.  Saturday’s SHOWTIME premiere of the main event will include the singing of the national anthems of the United States and Ireland by Grammy® nominated and multi-platinum artist Demi Lovato and Irish recording sensation Imelda May.

The SHOWTIME presentation of the exciting fight will be immediately followed by the premiere of ALL ACCESS: Mayweather vs. McGregor Epilogue.  The network’s’ distinctive Epilogue reveals the drama of fight night from a unique perspective and introduces viewers to the rarely seen aftermath of world championship prizefighting.  ALL ACCESS: Mayweather vs. McGregor Epilogue goes behind the scenes into the locker rooms, corners and inner circles as McGregor aimed to shock the world in his boxing debut and Mayweather exited the ring for the final time.