“I can easily see him becoming a world champion across a few different weight classes as long as he continues doing what he’s doing.” – Hitchins stablemate Gervonta Davis 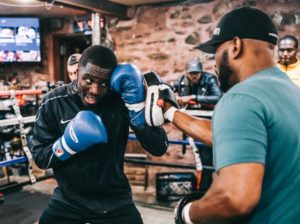 In the ShoBox main event, unbeaten Mayweather Promotions’ prospect Xavier Martinez 14-0, (10 KOs) will return to the series to go toe-to-toe with Filipino veteran Jessie Cris Rosales 22-3-1, (10 KOs) in a 10-round super featherweight bout. Kevin “The Second Coming” Newman 10-1-1 (6 KOs) will look to put on another show in his hometown in a rematch with Mark Hernandez 14-2-1 (3 KOs) in an eight-round super middleweight bout. In the opening bout of the telecast, Las Vegas’ knockout artist Rolando Romero 9-0 (8 KOs) will face once-beaten Dominican Juan Cordones 14-1, (9 KOs) in a six-round lightweight bout.

Tickets for the Mayweather Promotions’ Sin City Showdown start at $25 and can be purchased at: https://mayweatherpromotions.com/events/.

Brooklyn native Richardson Hitchins returns to the ring for the fourth time this year in his first ShoBox appearance as the 2016 Olympian looks to keep his perfect record intact against Kevin Johnson. His previous fight was in his hometown in Brooklyn, where he earned a stoppage victory on the Wilder vs. Breazeale undercard.  He will now venture to Las Vegas for the second time seeking his 10th win. Still just 22 years old, Hitchins has gained invaluable experience training with several notable fighters, including Terence Crawford, Sadam Ali, Luis Collazo, and stablemate Gervonta Davis.

Two-time world champion Davis feels Hitchins has the makings of a star and will be ready for a title shot in no time.

“He’s a great fighter,’ says Davis. “He’s explosive, he’s always had the talent and he continue to get better and better. I can easily see him becoming a world champion across a few different weight classes as long as he continues doing what he’s doing.

“We have spent a lot of time in the gym, he’s like a brother to me, so it’s great to see us push each other. He’s a champion without the belt, and without putting too much pressure on his career I can definitely see him fighting for a world title if not next year, in 2021. He’s been working really hard and I’m excited to see him in his first televised fight on November 1.”

Here is what Hitchins and Johnson had to say ahead of the November 1 match-up:

How has training camp been going in preparation for 11/1? Have you made any adjustments in your camp?

Hitchins: “I’ve been training hard, keeping the same routines. I’ve seen a lot of different styles coming up in the amateurs; the only difference is the rounds. I’ve picked up little tricks and things from training with Tank and a few other elite fighters.”

Johnson: “I’ve been training consistently for about 4 months now. I’ve been focusing on my dieting, strength and conditioning, hitting the bag with speed and power, and learning new moves. Overall my camp has been going very well.

“I’ve sparred with Devin Haney, Ryan Garcia, Demarcus ‘Chop Chop’ Corley, and other upcoming guys like Fernando Vargas Jr. I’ve had some great sparring in this camp. I’m looking strong, sharp, and in shape. I’ve been sparring 10 rounds and still have energy to do more at the end.”

Hitchins: “The plan is to stay composed. Be first with the attacks, be really sharp and aware, and counter or react to anything he plans to put together against me. I’m a completely different fighter from my debut. I’ve spent hours studying and working on my craft. I’m stronger, smarter, way more developed. Overall, I’m just a smarter fighter.”

Johnson: “I want to go in there and have fun, enjoy the moment, make sure that I listen to my coach, and allow my personality shine in the ring. I don’t really think about getting the knockout unless I see it coming. By my experience and my talent, I definitely will see the knockout coming and will hit him with some great shots and expose his weaknesses”.

What do you know about your opponent Kevin Johnson and his fight style?

Hitchins: “I know he’s fast and tries to fight like Floyd. That style won’t work well with me. I’ve seen that style countless times. He looks solid from my previous opponents, but I have noticed he takes a lot punches.”

Johnson: “I watched one of his recent fights and he’s a really good, tough competitor. Everything he does comes off of basic punches, so he is a really sharp fighter. It’s going to be a really good, exciting fight. I think I can definitely take him and get the victory.”

What will a victory on 11/1 do for your career going forward?

Hitchins: “It’s another win for me. It’s another opportunity to grow my brand, especially with my fight being on TV. I’m going to make a statement.”

Johnson: “If I beat Richardson Hitchins big things will come for my career. I don’t know what will come, but I definitely see the future being successful.”

This is your first nationally televised fight.  What do you plan to showcase for fans watching at home?

Hitchins: “I know I will look great. To casual boxing fans I will bring a great show, boxing skills, hand speed, the whole package. I have a lot to show. For the fans who’ve seen me before they’ll already know what’s coming.  Another great performance and a W.”

Johnson: “I’ve been promoting my fight heavily on all my social media platforms and have been receiving a lot of engagement that is helping grow my fan base. My followers have been telling me that they will be tuning in or coming to the fight, so I will definitely have a big fan base coming to Sam’s Town. I’m excited to have my first fight on TV, but I’m not thinking the popularity. I’m thinking about my opponent and doing with I’m training to achieve. This will just bring me closer to getting a shot at a championship belt.”

Fans can live stream the undercard fights on Mayweather Promotions’ Facebook beginning at 4:30 p.m. PT/7:30 p.m. ET. Bring a minimum of 5 food items to receive a complimentary general admission ticket (limit 1 ticket per person while they last). List of accepted items include mac & cheese, corn bread, green beans, cake mix, cake icing, and mashed potatoes. Tickets for the live event start at $25 and are on sale now. To purchase tickets to the live event, visit: www.mayweatherpromotions.com/events. Doors open at 4:30 p.m.