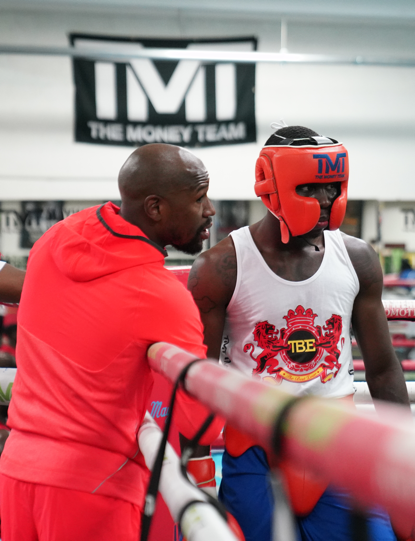 “Floyd helped me tremendously while I was back in Las Vegas,” said Hitchins. “I already have the fundamentals as a fighter, but he showed me little things here and there and workouts that I have taken back home with me while I train for this fight. I’m not shy about my ability as a fighter, because I truly believe I am the best up and coming fighter in the game, so these are the kind of fights I need in order to show the world who Richardson Hitchins is.


“Gervonta has been instrumental in past fight camps as well, and he’s the type of person you need. He pushes you to go harder. We go head-to-head in trying to outdo each other, and that’s the type of competition that’s needed in order to really be the best.”
Despite training throughout the pandemic, Hitchins has been able to remain on task and on track throughout his camp that began in Las Vegas before ending in his native Brooklyn under the guidance of his head coach Lenny Wilson.
“The thing about me is, I’m focused no matter what,” said Hitchins. “I don’t take ‘off’ after my fights. I stay in shape all year round; I don’t need to get ready in terms of conditioning or getting my body back in shape because this is my job. I take my job very seriously. The discipline Floyd has had throughout his career is the same discipline I have. I have watched my idols and taken things from them so that I can put myself in a position to win.
“I don’t think the pandemic or the holidays necessarily altered my training. I still have access to my gym. There’s nothing that’s going to stand in my way of becoming great. The pandemic doesn’t slow me down, it’s just another roadblock to test my dedication to the sport.”
The 23-year-old Hitchins represented Haiti at the 2016 Olympic Games and will return to the ring after debuting in 2020 with a 10-round decision victory over Nicholas DeLomba in February. It was Hitchins’ second 10-round decision win after his previous fight saw him best Kevin Johnson following 10 rounds in November 2019.
“I often think back to my fight against Kevin Johnson, he’s a tough fighter and he’s the one who I can confidently say brought the best out of me,” said Hitchins. “Those are the fights that make me look back and watch closely the things I need to work on. That fight also showed me that no one should be overlooked, so going into this fight against Mendez, I’m not overlooking him.”
Mendez presents the most accomplished opponent of Hitchins’ young career. The 34-year-old former champion most recently fought Juan Heraldez and Anthony Peterson to draws in 2019, and scored victories over Eddie Ramirez and Ivan Redkach prior to that. For Hitchins, the strong resume of his opponent is something he relishes as a measuring stick for his progress.
“He’s a veteran, he’s been in there with a lot of tough guys and he’s a former world champion, so he clearly has a skill set that I think I need to face at this point in my career,” said Hitchins. “I need those big fights. He’s older now, but I feel like him in his prime still couldn’t touch my skillset. It’s my job to prove that.
“I know this won’t be an easy fight, but I’ll be prepared for whatever he brings. My motivation is to be more than ordinary. I will fulfill my goals when this is all said and done, and honestly, I’m just waiting for this fight to come so I can show that. Whether it’s Mendez, or whoever, the conviction I have and how I feel about myself is stronger than anything standing in front of me in that ring.”
# # #
ABOUT COLBERT VS. ARBOLEDA
Colbert vs. Arboleda will see two of the top fighters in the 130-pound division meet when unbeaten interim WBA Super Featherweight Champion Chris “Primetime” Colbert faces the hard-hitting Jaime Arboleda in the main event of SHOWTIME BOXING: SPECIAL EDITION Saturday, December 12 at 9 p.m. ET/6 p.m. PT live on SHOWTIME from Mohegan Sun Arena in Uncasville, Conn., in an event presented by Premier Boxing Champions.
The tripleheader will see rising super lightweight phenom Richardson Hitchins taking on the toughest test of his young career as he faces former world champion Argenis Mendez in the 10-round co-main event and middleweight contenders Ronald Ellis and Matt Korobov battle in the 10-round telecast opener. The event is promoted by TGB Promotions and Sampson Boxing. Hitchins vs. Mendez is co-promoted by Mayweather Promotions.
For more information visit
www.SHO.com/sports, www.PremierBoxingChampions.com, follow on Twitter @ShowtimeBoxing, @PremierBoxing, @TGBPromotions and @MayweatherPromo, on Instagram @ShowtimeBoxing, @PremierBoxing, @TGBPromotionss and @MayweatherPromotions, or become a fan on Facebook at www.Facebook.com/SHOBoxing and https://www.facebook.com/MayweatherPromotions/.
CONTACTS:
SHOWTIME Sports: (212) 708-1734
Tim Smith, PBC: (702) 843-3400
Nicole Craig, Mayweather Promotions: (702) 807-1788
TGB Promotions: (818) 817-8001
Steve Pratt, BZA: (310) 408-4555
Swanson Communications: (202) 783-5500, contact@swansonpr.com