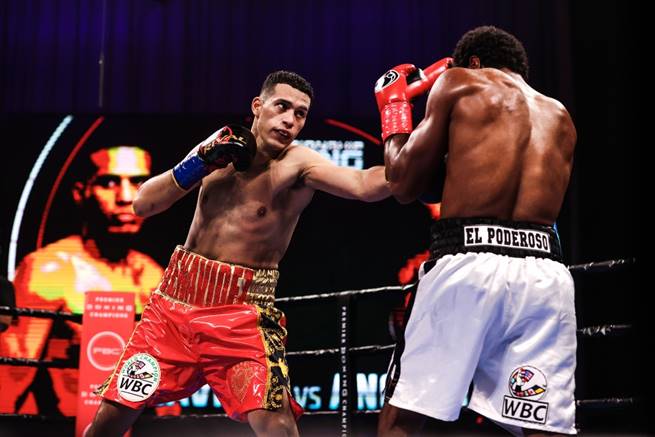 UNCASVILLE, Conn. – August 16, 2020 – David Benavidez kept his unbeaten record intact after 23 fights with a dominating performance against Alexis Angulo in the main event of an exciting night of boxing live on SHOWTIME Saturday night from Mohegan Sun Arena in Uncasville, Conn., presented by Premier Boxing Champions.

In the SHOWTIME CHAMPIONSHIP BOXING® tripleheader card, the 23-year-old Benavídez (23-0, 20 KOs) – who lost his WBC world title belt on the scale on Friday – scored a stoppage victory against the former world title challenger Angulo (26-2, 22 KOs), whose corner threw in the towel after the 10th round.

“I rate myself a solid eight,” Benavidez said. “I could have done some stuff better, but overall it was a great performance. I didn’t want to go too fast and leave myself exposed for some big shots. He’s a heavy puncher. But like I said, I like to do the stuff that nobody has ever done. Nobody has ever stopped him and I’m pretty sure nobody is ever going to make him look like that again. I demolished him from round one to round 10.”

A seven-year pro at the age of 23, Benavidez landed 56 percent of his power punches in the fight and averaged 29 of 70 punches thrown per round. Benavidez closed the show by landing a career high 54 punches in round 10.

Colombia’s Angulo, now fighting out of Miami, Fla., entered his second world title opportunity riding a three-fight winning streak, but was unable to come counter anything Benavidez threw at him.

Benavidez said he was disappointed and embarrassed by not making the 168-pound weight limit on Friday. “Everything everyone said about me is true,” Benavidez said. “I should be a professional and come in on weight, but this time I couldn’t do it. It’s my first time not making weight in eight years of being a professional.”

“I really have to talk to my promoter to see what’s next,” Benavidez added. “I’ll fight anybody to get back to the spot I was. You could see by this performance tonight, I could put on a great performance against anybody and people will pay to see that. I’m probably going to go right back into training camp to make sure I don’t miss weight.”

The story of the fight was Maríñez’s reliable jabs as the Dominican fighter won the battle in that department (14 percent compared to Romero’s 10 percent). It was Romero, however, who held the advantage on power punches connecting on 24 percent (31 of 228) compared to 18 percent for Maríñez (72 of 401).

“I don’t think I had a bad performance,” said Romero, who confidently predicted a brutal knockout would end the bout in his pre-fight comments. “I thought I won the fight. Regardless of everything, I’m the world champ now. I’m happy.”

Romero suffered a slight cut above his left eye in the ninth round on a head butt, but it didn’t seem to affect his performance in the championship rounds. “He came out a little bit tougher and slicker than what I thought,” Romero said. “But all he did was move around the entire fight. He didn’t even try to engage. It’s hard to knock out someone who doesn’t try to engage. I hurt him multiple times with body shots and a few hooks. There was one moment I hurt him with a right hand and he pulled my head down. It was just hard to finish him off.

“Yeah [I would give him a rematch]. He didn’t do anything special.”

The 29-year-old Maríñez, who holds the WBA’s No. 6 ranking, is trained by Robert Garcia, who was not present in the Maríñez’s corner electing not to travel cross country from his Southern California home.

“That was pure robbery,” Maríñez said. “I won the fight. I out-jabbed, out-boxed him. You could tell he didn’t think he won the fight right afterwards. It’s a robbery.”

In the opening bout of the telecast, heavyweight contender Otto Wallin recorded a TKO at 2:32 of the fifth round against Travis Kauffman, who re-tore his left labrum at the start of the fifth round and was unable to lift his arm. Referee Michael Ortega signaled the end of the fight and afterwards Kauffman announced he was retiring from boxing, just days ahead of his 35th birthday.

The 29-year-old Wallin (21-1, 14 KOs) who had a four-inch height advantage over Kauffman, said he felt for the injured Kauffman, but was dominating the fight. “I was breaking him down. I had a lot left,” Wallin said. “Too bad he hurt his shoulder in the end, but I was breaking him and hitting him with good clean shots.”

Wallin looked sharp in his return to the ring for the first time since he nearly defeated Tyson Fury in September 2019. He landed 12 jabs per round and 54 percent of his power shots throughout the fight. Currently living in New York City and originally Representing his native Sundsvall, Sweden, Wallin had former champion Joey Gamache in his corner for the bout.

Both fighters have recovered from injury in the recent past, as well as the COVID-19 virus. “I didn’t feel anything from COVID,” Wallin said. “I had great training. I was sick in March, but COVID didn’t hit me very hard. I was lucky. I’m sorry for everyone who lost their lives due to COVID.

The 34-year-old Kauffman (32-4, 23 KOs) from Reading, Pa., was fighting for the first time in five years and seven fights without his trainer Naazim Richardson, who died unexpectedly last month. After the fight, Kauffman said he was retiring from boxing.

“I tore my left labrum getting ready for the [Luis] Ortiz fight,” Kauffman said. “Like a dummy, I waited five months to have surgery on it after the Ortiz fight [December of 2018]. I started feeling better and was going to do a tune-up fight in March, but then COVID happened. This opportunity came up and I didn’t want to pass it up and I felt good. In the first round I hurt it. I felt it, but then it went away and I thought maybe it’s just my mind and it went away. Then in the fifth round I heard it and that was it. It was torn again.

“I’m done. I’m retiring. I have kids. I’ve been doing this a long time,” Kauffman said.

During the SHOWTIME CHAMPIONSHIP BOXING telecast, there were several important updates to the upcoming September 26 SHOWTIME PPV twin bill featuring the world champion Charlo twins, which will start live at 7 p.m. ET/4 p.m. PT. Five of the six bouts of the unique doubleheader all for one price will be contested with a World Championship belt at stake.

Saturday’s SHOWTIME CHAMPIONSHIP BOXING telecast, the second of a nine-event television lineup taking place over the next five months, will replay on Monday at 10 p.m. ET/PT on SHOWTIME EXTREME.

The telecast was available in Spanish via Secondary Audio Programming (SAP) with Alejandro Luna and former world champion Raul Marquez calling the action.