Rolly Romero Is Going for the Knock-Out 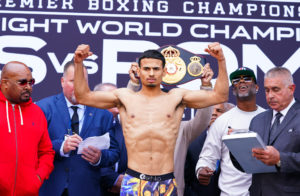 Rolando “Rolly” Romero exudes confidence ahead of his upcoming fight against Gervonta “Tank” Davist at Barclay Center in Brooklyn on May 28th.

But Rolly isn’t having any of that. “I’m massive compared to him.”

He tells fans, “Tune in May 28  – bet everything you’ve got on me and we’ll all get rich together.”

He’s predicting he will achieve a career-defining moment by knocking out Tank in the first round, no less.

I’m really not looking for this to go past the first round.” 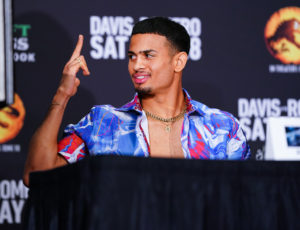 “My top 3 career moments will be May 28th when I knock out Gervonta Davis, and whenever I knock him out again, and then a third time..”

We asked Romero about how his camp is going. He’s feeling upbeat and enjoying his favorite part of camp, which is sparring.

“Camp has been great. I like to hit the mitts with Bullet, but my favorite thing is sparring. I have a sparring addiction.”

Rolly feels that sparring is his best preparation for the fight.

“Sparring prepares me the most for fights. I will spar 18 rounds straight like it’s nothing.”

Sparring also builds his positive mindset ahead of the fight because he just loves to punch. 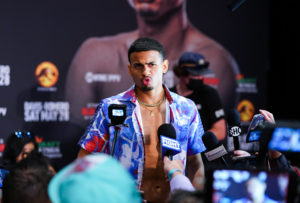 He’s inspired the most by his father, who is also a boxer, as well as his favorite athletes, who are all boxers.

When he relaxes he watches gangster movies like “The Godfather” and enjoys the chicken curry and other specialties that his meal prep chef prepares. Still, he’s looking forward to crab legs post-fight when he’s hopefully celebrating a victory.

Romero says he’s been asking for this fight for a long time, since 2017.

Now that he’s in the spotlight, headlining this PPV card with Davis, Romero feels that his time has come.

“It just shows that I’m an extremely marketable fighter, and I’ve done well promoting myself, and I’m the best self-promoted fighter in the game right now.”

Will Romero get his knock-out of Tank? Or will it go the other way?