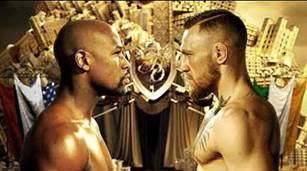 Floyd Mayweather vs. Conor McGregor is a 12-round super welterweight matchup that pits the legendary boxer Mayweather against the all-time MMA great McGregor in an unprecedented event that takes place Saturday, August 26 at T-Mobile Arena in Las Vegas.  The event telecast is produced and distributed by SHOWTIME PPV® and promoted by Mayweather Promotions.