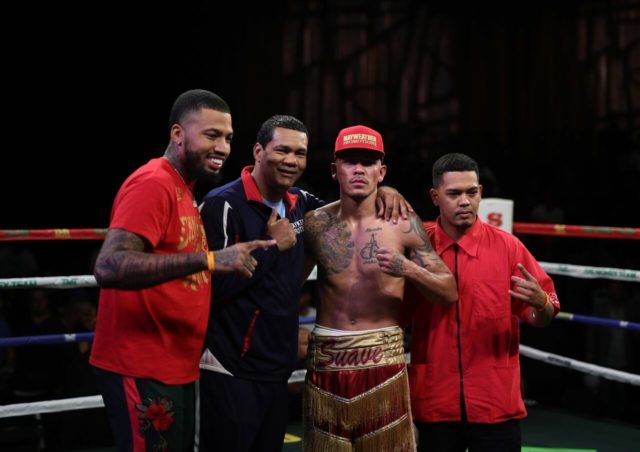 After 10 rounds of non-stop action, Cameron Krael (14-13-3, 3KOs) came out on top over Jose Borrego (14-2, 12 KOs) to earn the victory. Krael’s speed and piercing power allowed him to land strong shots and counter punches to his opponent. The bout was a war from the start of the first round, as the fighters took little time to feel each other out in the first round before getting to business, and there was no turning back. Krael and Borrego battled into the second round and continued the momentum in the rounds that followed. Both fighters threw consistent combinations and by the middle to late rounds they kept the fans on their feet. Krael’s striking punches, and combinations of body shots and jabs, began to take a toll on his opponent. The toe-to-toe action and exchanges of electrifying blows continued until the bell sounded in the 10th and final round. It was an all-out war and judges scored the bout a majority decision in favor of Cameron “Suave” Krael”.

Borrego was unavailable for post-fight quotes.

“I absolutely do not agree with the judges’ decision, said Gary Jones, Borrego’s manager. “I think our fighter won at least 7 or 8 rounds, out-punched him every round, but you’re dealing with a small arena with a loud crowd. He was a visitor and it was a hometown crowd and I think the crowd noise influenced the judges every time our fighter got hit and it got quiet every time our fighter hit him. It put the psychological target on the judges to really call the fight right when they heard that kind of noise. We’re going to work on not taking those shots at the end of the exchanges. He got hit with a lot of jabs, but Krael definitely threw more power punches and hit him with bigger shots. If Borrego can take care of one thing and not get hit on the way out at the end of those exchanges, he would’ve probably dominated the rounds.”

“I thought I did great, fought in true champion style, said Krael. “My boxing was on point tonight, that’s what I showed new to my game, thanks to my new coach Otis. He taught me how to box, how to jab, and just stay in the outside pretty much. I didn’t face any major challenges against Borrego because I knew he was going to bring the pressure and I just tried to stay on the outside as much as possible. I felt that could’ve stayed busy with my punches and threw a lot more of them. I’m ready for bigger things, whatever they got coming up for me, I’m ready.”

20-year old unbeaten prospect, Xavier Martinez (12-0, 7KOs), headlined the co-main event vs. veteran contender Oscar Bravo (23-9, 11KOs) in a Super Featherweight battle. Both fighters entered the ring with explosive shots. During the 2nd round, Bravo suffered a cut over the left eye from the exchange of on target blows he received from Martinez. This didn’t stop Bravo’s determination through the rounds. Martinez picked up the momentum and continued dominating in the 3rd round and didn’t slow down. The referee stopped the fight at 2:46 into the 6th round deciding that the fighter was unable to continue, improving Martinez’ record to (12-0, 8KOs). This was the first time Bravo has been stopped in his career.

“I’d rate my performance a ‘C’, I can’t ever be satisfied, stated Martinez. “I got hit with a few punches that I shouldn’t have gotten hit with, but it’s all a learning experience. I honestly knew he was going to be my toughest opponent to-date. I could’ve been a little sharper on my defense and went to the body a little more towards the end.”

“I don’t agree with the judges’ decisions, says Bravo. “I was taking shots because I wanted to counter punch him with a cross punch, but the ref thought I was hurt, and it wasn’t like that. I was only waiting for the exact moment to cross punch and knock him out. I feel that I forced myself enough, I knew I could throw another punch and be able to catch-up, but the ref didn’t let me continue with my game plan that I had at that moment.”

Additional action saw a super middleweight match-up between Lionell Thompson (20-5, 11KOs) and Indiana’s Derrick Findley (28-24-1, 18 KOs). This fight between two hungry and experienced fighters started off very measured with both fighters choosing their shots with caution but turned out to be a full-on brawl. The fighters got the best of one another and applied the pressure when needed. After 10-rounds of non-stop action, judges scored the bout a unanimous decision in favor of Thompson improving his record to (20-5, 11 KOs).

Super middleweight, Kevin Newman made his return to the ring and improved his record to (8-1-1, 4KOs) with a second round TKO victory over Ohio native, Egerbhert Reed (4-5-1, 1KO). Jose Valenzuela (1-0) made his pro-debut in stellar fashion by earning his first professional victory by unanimous decision over Humberto Tellez (0-2) in a 4-round featherweight bout.  In the opening bout of the night, we saw prospect Sevelle Hasan (2-1, 1KO) defeat Kaywann Sistrunk (0-1-1) by technical knockout 1:10 into the third round of a 4-round super lightweight battle.