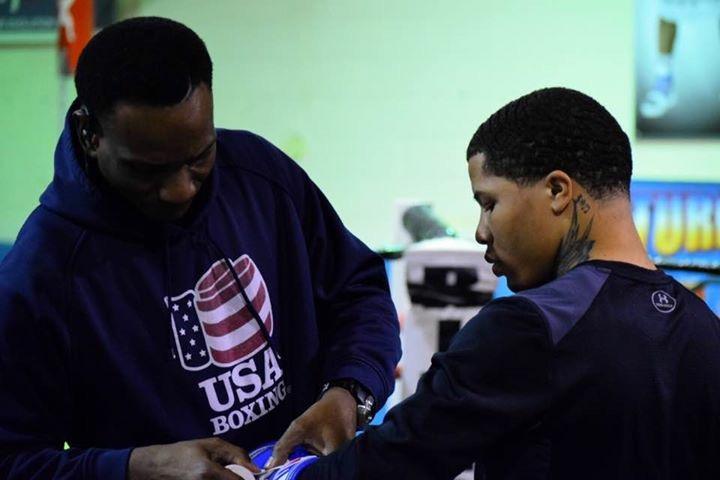 Davis, 22, overcame a childhood filled with hardships to become a prolific amateur and has been virtually unstoppable as a professional. As an amateur (between 2006-2012), he entered nine tournaments and came away with gold medals in all but one. He won gold in his last four tourneys, including the 2012 National Golden Gloves Championship at 123 pounds.

Since going pro in February 2013, the strong, aggressive-minded southpaw has played smash-mouth against mostly outclassed opponents, winning 13 of his 15 knockouts inside four rounds. To many, Davis resembles a young, smaller version of Mike Tyson in the way he walks down foes, gets on the inside and unloads lethal hooks and uppercuts. He’s gone into the ninth round once and into the sixth round twice. A winner of six straight by knockout, Davis’ lone fight to go the distance came in his ninth outing, a six-round nod over German Meraz, who went down twice, in October 2014. Davis is coming off a 0:41, first-round KO over Mario Macias last June 3.

Although powerful, very fast and determined, the talented Davis is taking a significant leap in class and he may enter the ring as a slight underdog to Puerto Rico’s Pedraza, 27, a solid switch-hitter with first-rate skills, movement and punching power. This will be Pedraza’s third defense of the IBF 130-pound title. He’s gone the 12-round distance four times in a row and five times since his pro debut in February 2011. At 5-feet-8½, he is two-and-a-half inches taller than Davis.

Davis, the IBF’s No. 8-ranked super featherweight, who was born and resides in Baltimore, shared thoughts on his upcoming fight from the Uptown Boxing Center in Baltimore:
You’ve been a professional for less than three years, yet you’re less than two weeks away from getting a crack at a world title. What are your thoughts about that?

“It’s been my goal to fight for a world title. I’m very confident. I’ve worked hard in the gym for over two months for this fight. I’ve put in the hours. I’ve had a great camp with great sparring. I’m not surprised the fight is almost here. This is perfect timing for me.”

Have you done anything differently in this camp?

“Maybe some little things, but not really. We take training seriously. We take all our opponents very seriously. But I have to treat it as just another fight, against another opponent. We know Pedraza is a world champion, a great fighter that comes to fight and we give him his respect as a world-class fighter. I know he’s going to be ready. He’s always ready when it’s time to get in there and do his job. But I’m prepared for him. He doesn’t know what we bring to the table.”

Are you surprised you’re not favored? When was the last time you were an underdog?

“I’m the underdog because he’s the world champion, that’s the reason. Other than that, I feel deep inside that he’s the underdog, but that’s just my assessment. He won’t be showing me anything I haven’t already seen before.

“I’ve never been the underdog in a fight, so this is a first for me.”

When’s the last time you lost a fight?

“I’m competitive all around and don’t like losing. I can’t remember exactly the last time I lost a fight, maybe it was three years ago. All I know for sure is that my mind entering this fight is all about winning.”

Critics talk of your level of competition, or lack of. What’s your opinion of the fighters Pedraza’s successfully defended against lately?

“I’m not taking anything away from Pedraza; he’s beat Stephen Smith and Edner Cherry but those guys don’t bring the power, speed, elusiveness and angles that I do. I’m not downgrading anybody, but they’re mostly average.”

Are you looking at this as an opportunity to showcase your overall skills, durability, etc.?

“A lot of people don’t realize the skills and talent that I have. They see me just going in there like a little Tyson or someone like that. But I have all the tools. I know how to box, how to move my feet. I have good hand speed. I work my angles and things like that. I’m an overall sound fighter, a boxer-puncher.

“I think this will be a wakeup call for boxing, a chance to show that I’m the one. But I’m not coming to be just the top guy. I want to be a superstar and bring joy and entertainment to the sport. Pedraza will bring out the best in me and I will steal the show.”

How do you manage to stay in the moment, and not look back, or can you?

How much is your past a motivation, or is it? When you look back at your life do you have memories or nightmares?

“I believe I’ve accomplished a lot. Me just being alive today, me not being in jail or in trouble outside the ring, it’s hard from where I come from. But it’s all helped me handle situations well. I’m so used to dealing with situations. I’m older and know what’s right from wrong. There’s never any pressure when I fight. I’ve won so many fights already I know what to do when I get in the ring.”

How long have you known Floyd? When did you meet him and how would you describe your relationship? What does it mean for Floyd to be your promoter?

“The first time I talked to Floyd (at length) was at the Adrien Broner-Shawn Porter fight (June 20, 2015). Me and Adrien, we’re friends and he flew me out to Las Vegas for the fight. I worked out at the Mayweather gym and Floyd liked the way I fought, my heart. But the first time I actually met and talked to him came when one of Floyd’s press tours came to Washington, D.C.

“Floyd has always had a major impact on me and my career. I grew up around him. All of us wanted to be like him. Like Tyson and Ali were to the generations of boxers before me, Floyd was our superstar. For him to bring me under his wing, to fight for him, is unbelievably great.”