“For this fight I’m training like Rocky in the freezer, ready to fight!” 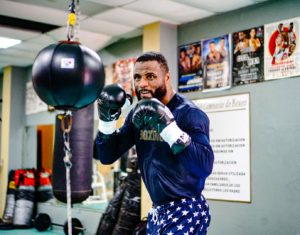 PUERTO RICO (December 20, 2019) – As Jean Pascal prepares to defend his WBA Light Heavyweight Title, the two-time world champion shared an update from his training camp in Puerto Rico as he prepares to take on two-division champion Badou Jack Saturday, December 28 live on SHOWTIME from the award-winning State Farm Arena in Atlanta in a Premier Boxing Champions event.

“Training camp has been excellent,” said Pascal. “I’ve been working hard in Puerto Rico, and feel very confident going into this fight. I stay at this elite level because I stay in the gym even when nothing is scheduled.”

Pascal captured his title by defeating then unbeaten Marcus Browne in August by technical decision. Pascal came through in the underdog role, dropping Browne three times to earn the decision after the fight was stopped due to a cut suffered by Browne.

I’ve been the underdog my whole career, so it’s nothing new to me,” said Pascal. “But I have to say that beating Marcus Browne did feel great. I showed the world that I’m special. I’ve been at the highest level of boxing for over eleven years and I’m still here. I became two-time champion ten years after winning the title the first time, I don’t think that’s ever been done in this division!”

In his first title defense, Pascal will be facing an accomplished champion of super middleweight and light heavyweight in Jack. The WBA belt that Pascal will be defending was even held by Jack who won it in his debut in the 175-pound division. Now Pascal will look to take down another one of the biggest names in the weight class on December 28.

“Badou is a great fighter,” said Pascal. “We both always look to fight the best. In my last fight I knew that Marcus would be on his back foot, but Badou comes to fight, so I’m going to be war ready. I consider him a boxing friend, but on December 28th when that bell rings, he’s the enemy.”

Pascal and Jack share a recent common opponent, as Jack’s last fight saw him lose a decision to Browne, in a fight where Jack had to fight through a gruesome cut on his forehead just to make it to the final bell. Although both fights happened recently, the style difference between the fighters will make December 28 look very different according to Pascal.

“I saw Jack’s fighting against Browne, but styles make fights so I don’t compare it to mine at all,” said Pascal. “Obviously Browne was lefty so sparring was different but for that fight I trained like Rocky chasing the chicken because of Browne’s style. Everyone saw me catch that chicken too, but for this fight I’m training like Rocky in the freezer, ready to fight!

Pascal captured his first title in 2009 and on December 28 he will look to head into another new decade as a light heavyweight champion, with a chance to further cement his status as one of the top light heavyweights of the era.

“I’m fighting for the fans and to cement my legacy,” said Pascal. “This is a another big fight and if you look at my record, that’s all I look for. On December 28 I promise the boxing world I’m coming to fight and I will be at my best.”