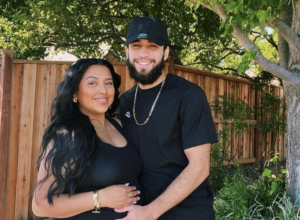 Xavier Martinez is confident that 2021 will be a big year in the ring, though nothing will compare to the next personal milestone.

A win will keep Sacramento’s Martinez (16-0, 11KOs) on course to become the next world champion under the Mayweather Promotions banner. He is due, however, to have a new member of the family well before that point.

“It’s exciting,” Martinez said ahead of this weekend’s fight. “What really drives me now, I have a daughter on the way. That’s what drives me more.

Martinez and his longtime girlfriend, Jessica Archuleta expect their first child in mid-June.

The life-changing experience adds to the growth of Martinez, who is coming off of his toughest win to date. The rising 23-year-old saw a seven-fight knockout streak come to a halt in a 12-round unanimous decision victory over former WBA featherweight champion Claudio Marrero last October at Mohegan Sun Casino in Uncasville, Connecticut.

Not only was Martinez forced to go to the scorecards, but he had to overcome a pair of knockdowns in round eight in order to preserve the well-earned victory. It kept the boxer in contention for his first world title, although he’s required to take an additional step this weekend in order to arrive at that point.

Burgos (34-4-2, 21KOs) represents another step up in competition for Martinez, even as a late replacement for countryman Abraham Montoya. The 33-year-old Tijuana native has never been in 40 pro fights, including his going 12 rounds in title challengers at featherweight and junior lightweight versus Hozumi Hasegawa, Roman Martinez and Mikey Garcia, the latter who has since become a four-division world champion and pound-for-pound entrant.

A win on Saturday will go a long way towards Martinez challenging the elite of the 130-pound division as well as providing for his future. However, the undefeated boxer isn’t leaving anything to chance, in or out of the ring when it comes to his family including the newest arrival.

“The biggest change I made wasn’t in camp, it was in life,” admits Martinez. “One thing I wound up getting was life insurance. Once I found out I had a daughter on the way, I wanted to make sure I took that step.

It only adds to his desire to remain undefeated and maintaining his short-term goal of establishing himself as the best junior lightweight in the world.

There is plenty of competition at the top, including one particular future opponent in mind. A war of words has already emerged with one future ring rival, current WBA interim junior lightweight champion Chris Colbert (15-0, 6KOs). The two went back and forth through the media during the pandemic one year ago, only to head in separate directions when it came time to return to the ring. Martinez landed his aforementioned fight with Marrero, while Brooklyn’s Colbert wrapped up his 2020 campaign with an 11th round knockout of Jaime Arboleda (16-2, 13KOs) last December.

By his own admission, Martinez thought his next fight would be versus Colbert for the title. His divisional ring rival added fuel to the fire in a recent interview on The PBC Podcast earlier this year.

Martinez is ready to honor that agreement. More than another win under his belt should all go well this weekend, he will also carry the responsibility of fatherhood into the ring for all future fights.

“I don’t worry about the drama too much,” admits Martinez. “The main thing that motivates me is becoming a dad. I like being the underdog in that fight, too. I will be the underdog. I will be doubted. That will drive me enough, those two things. It’s just words between me and Chris Colbert. There are so many other things to focus on beyond that, like my family and soon my daughter.”