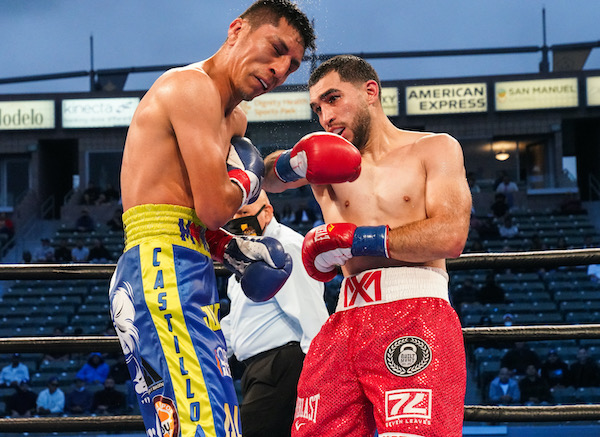 If there was a lesson to be learned from Xavier Martinez’s most recent win, it’s that you can’t please everyone—not even after rising to the occasion and delivering an action-packed performance.

A grueling 10-round fight concluded with Sacramento’s Martinez soundly outpointing three-time title challenger Juan Carlos ‘Miniburgos’ Burgos. All three judges—Dr. Lou Moret, Dave Deverges and Rudy Barragan—scored the contest 99-91 in favor of Martinez, who improved to 17-0 (11KOs) as he eyes the next step in his rising career.

Even if the scorecards didn’t tell the full story, neither did the boos following what was otherwise a celebratory moment for Xavier Martinez.

“It was fun… I had fun,” Martinez said of the win over Burgos, which aired Saturday evening on Showtime from Dignity Health Sports Park in Carson, California. “I know [the fans] enjoyed the fight tonight, so I don’t know why [they were] booing.

“I know I could have done better but I was landing the cleaner, harder shots the whole time. Even if he was throwing the whole time, I was slipping a lot and catching him.”

Compubox credited Martinez with landing (329) and throwing (891) more punches than in any other fight as a pro to date. The Mayweather Promotions-guided junior lightweight contender landed at least 20 punches in every round and throwing more than 100 punches in three of the final four rounds. The high-octane performance came against a veteran contender in the 33-year-old Burgos (34-5-2, 21KOs), who forced an aggressive pace early in his best effort to discourage an opponent 10 years his junior.

Burgos saw something in Martinez’s last fight, where the 23-year-old had to twice climb off the canvas in order to earn a 12-round unanimous decision win over former WBA featherweight champion Claudio Marrero. Fortunately, Martinez was wise to the strategy, as he expects to be pushed to the limit on his rise from prospect to contender.

“I wasn’t surprised. He’s a competitor. It’s good having tough fights like this,” insists Martinez, who is trained by Ray Woods. “They help me get better every fight. I showed that I can hang in there with a tough competitor. I’m not even tired, I could [have kept] going if I need to. I had fun in there.”

The spirited effort was in line with the expectations of the team guiding his career.

“Anytime you have a young fighter, you want to test his skills against other good fighters,” noted Leonard Ellerbe, CEO of Mayweather Promotions. “There isn’t one fighter in the sport who hasn’t faced some type of adversity.

“That’s where it comes down to training and sparring. That’s when you see the true mark of a champion.

Martinez has shown that special spark through explosive knockout performances on the prospect level and determined grit as he sets his sights on challenging for a world title in the near future.

“I could have boxed him more but I wanted to give the fans action,” insisted Martinez, who enjoyed a 294-to-245 edge in power punches landed. “There’s nothing to complain about – I got the victory. I made it tougher on myself but I will learn from it. It’s back to the drawing board but it’s a great victory.

“I fought two very experienced fighters back-to-back. I like these fights and I won’t complain. Whatever my team has [next] in store for me, I will take it.”

The good news for the Mayweather Promotions team is that no task is too tall for their junior lightweight contender. The next development in Martinez’s life will be fatherhood, with his girlfriend Jessica due to give birth to their first child in June.

After that, the expectation is to challenge for a world title. Even if that isn’t next in line, it will certainly have to be another step forward.

“He’s a guy that wants all the smoke,” acknowledges Ellerbe. “He came off of a performance where he had face adversity and came back even stronger in this fight. He was even better in this fight than he was in his last one. He’s going to keep seeking out the biggest challenges at 130 pounds.”