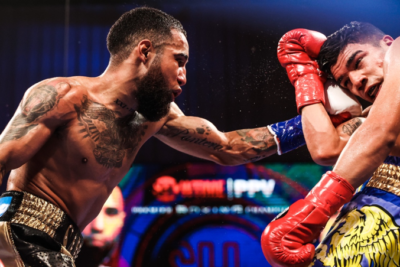 TIJUANA, Mexico (May 5, 2021) – Two-division world champion and current WBC Super Bantamweight World Champion Luis “Pantera” Nery will meet Brandon “Heartbreaker” Figueroa in a battle of unbeatens for supremacy at 122 pounds in a 12-round battle that headlines action live on SHOWTIME Saturday, May 15 from Dignity Health Sports Park in Carson, Calif. in a Premier Boxing Champions event.

The 26-year-old Nery will make the inaugural defense of his WBC crown in his first SHOWTIME CHAMPIONSHIP BOXING main event. Fighting out of Tijuana, Mexico, the undefeated champion has been training in his hometown just across the U.S.-Mexico border prior to relocating to Los Angeles this week ahead of his May 15 showdown with Figueroa. Now under the tutelage of his trainer Ismael Ramirez, Nery is confident ahead of this career-defining title fight which will set up a unification bout with WBO world champion Stephen Fulton, Jr. on September 11, live on SHOWTIME.

Nery shared his thoughts on training camp, the magnitude of his fight against Figueroa and more:

On what he’s done different in this camp:

“A lot has been different in this training camp. I am sparring against opponents that are very similar to Figueroa’s style. I am running more often. I am eating right. I am preparing in a very conscious manner. My knockout streak came to an end because I wasn’t fighting in my style. I am being more myself now like I was during my knockout streak. I have been loving how we have prepared for this fight as we continue on the road to success on May 15.”

“My mentality is simple: It’s either me or him. I don’t get in the ring thinking of getting to the final bell and potentially losing because of the judges. I am not leaving anything in the hands of the judges. I am going to be aggressive and I will be myself. I plan to win fighting in my style.”

On his respect for Brandon:

“I have a lot of respect for Brandon, but inside the ring, I am going to be the rudest person he’s ever met. Respect goes out of the window inside that ring. I am going to do everything to get the win.”

“I have not sparred with anyone that the general public would probably know but I have a lot of great competition with local guys here in Tijuana. They are very tough kids, very strong kids. They are probably stronger than the big name fighters.”

“Figueroa has long arms but I have fought against many fighters with long reach before. I have plenty of experience there. I will find opportunities and I will use those to my advantage.”

On the belief that Brandon is a ‘Pretty Boy’:

On Stephen Fulton, Jr. sitting ringside ahead of a Sept. 11 unification bout with the winner:

“I really could not care less about Fulton being ringside on May 15. He’s a blabbermouth anyway. What I am focused on is beating Brandon Figueroa. The time will come to worry about Stephen Fulton. But for right now, I do not care about him.”

ABOUT NERY VS. FIGUEROA

Tickets are on sale now and can be purchased at AXS.com. Dignity Health Sports Park will be open to fans in a limited capacity, with all guests remaining socially distanced and subject to local and state health guidelines throughout the event.